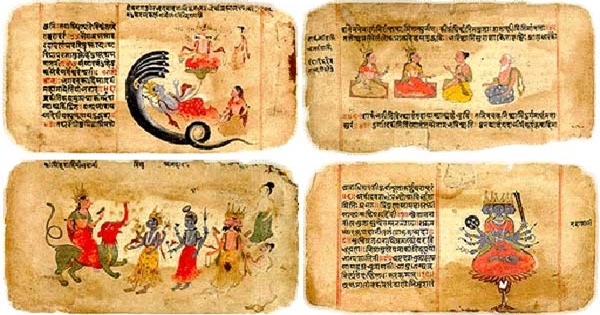 India is a civilisation that owes its origins to poetry. The Vedas, which are a large body of knowledge texts in four parts – Rigveda, Yajurveda, Samaveda, and the Atharvaveda, are the oldest known verse compositions. Composed in Sanskrit, the Vedas are considered to be apauruṣeya, which means ‘authorless’, ‘impersonal’, ‘superhuman, not of man’.

Vedas are also called smṛti meaning what is remembered. Since thousands of years, thousands of Rishis chanted mantras and hymns and stockpiled the powerful positive energies in the atmosphere around. These were handed down from one generation to another through memorization by word of mouth. The same is remembered, chanted, and the cycle continued until they were compiled. For hundreds and thousands of years before they were compiled, they were smrti. This is the reason why when one listens to Sanskrit chants from the Vedas and other scriptures, the positive energy is added and the aura around further energized. Energy vibrations are robotically created all around. These vibrations replace negative energy with positive ones. The chanter or the listener benefits immensely.

Major General GD Bakshi while delivering a speech at IHC Delhi on the occasion of Rabindranath Tagore Literaray award ceremony 2018 said about the Vedas, “The Indic civilization owes its origin to the world’s first set of poems – the Vedas. The Vedas are the most pristine, the most beautiful, and the most mystical poetry that has ever been composed in all the ages. It is such a sacred resource; it was not material. The richest resources of this civilization were these divine, mystical poems. For 5000 years, from father to son, these poems were passed down from generation to generation even before writing was invented until before the time of the Mahabharata, Ved Vyasa compiled these poems.”

“The poets of the Vedas call God Kavi Kratu, meaning Poet creator. Effortless the poems emerge from the poet like telldhar (flow of oil) in meditation. Actual genuine poetry flows with ease and harmony. The seers who brought the Vedas said they did not write the poems.  It was Apurushaya – not composed by man. There are these richas – the divine inspirations that were circulating in the information sphere or infosphere…from there they sought those truths and insights. The sages only received these richas in their awakened minds like lightning conductor. That’s how the rhythmic speech of poetry emerged from their minds.”

“Over time, the poets have recorded life through the rhythmic patterns of poetic speech through metaphors, alliterations, rhymes and meteres.  The Vedas are written in Sanskrit, the language of the intellectuals of that era. We have the mighty epic poems of the Ramayana, the Mahabharata. Then over a period of time we come to the Middle Ages that continued with our Sanskritik art forms.”

“Then there was Tulsidas who revived the rhythmic speech in Awadhi, the language of the masses, creating those rhythms of poetry done by Valmiki. Then there was Meera, then Kabir and there were the Sikh Gurus. Even the Guru Granth Sahib was poetry – received poetry.”

Poetry is a dying art form today. There was a vacuum in poetry for some time until Guru Rabindranath Tagore infused life into it. In this context, Maj Gen GD Bakshi said, “This was the civilization that owes sustenance to poetry. For a civilization like this for the poetry art form to die out is a tragedy of monumental proportion. And then Guru Rabindranath Tagore came to the rescue of the art form of poetry in India.”

“Guru Rabindranath Tagore was the first Asian to receive the Nobel Prize for Literature. He made Indian poetry known all across the globe. His Geetanjali crossed all borders. He composed the National Anthems of three countries- INDIA, Bangladesh and Sri Lanka (tune). He is the true symbol of the revival of poetry in India and the world.”

Maj Gen (Dr) G D Bakshi was shortlisted for the Rabindranath Tagore Literary Prize for his collection of poems titled Dances with the Cranes, conferred by the Maitreya Foundation of US. The shortlisted personalities were felicitated on 11 April 2018 at the India International Centre, Delhi.

The poems in Dances with the Cranes deal with the theme of reincarnation. The Black necked cranes who migrate each year into Ladakh, Bhutan and Arunachal Pradesh from Tibet and other SE Asian counties are used as a metaphor for the flight of the soul from body to body. Maj Gen GD Bakshi has used bird migration as a symbol for transmigration.

Maj Gen Bakshi wrote this collection of poems when he was fighting intense Counter Terrorist operations in the rugged mountains of Kishtwar. He had to see a lot of death and dying and this led him to pen these poems. Essentially they are poems of hope – for they talk of life beyond death.

Besides Dances with the Cranes, Maj Gen GD Bakshi has authored 35 books and over 150 papers. He is one of the most combat experienced officers of the Indian Army. He won the VSM while leading his battalion through fierce skirmishes on the LC in Kargil and later won the Sena Medal while leading CT operations in Kishtwar. He later commanded the reputed Romeo Force (Division) in CT operations in Rajouri & Punch. He had two tenures in the prestigious MO Directorate at New Delhi. He taught at the IMA Dehradun, Staff College Wellington and the prestigious National Defense College at New Delhi. A Phd in Strategic studies, he is a member of many prestigious think tanks. He appears regularly on national TV debates. Currently, he is Editor of Indian Military Review and Senior Security Advisor with the Reliance Industries Ltd.