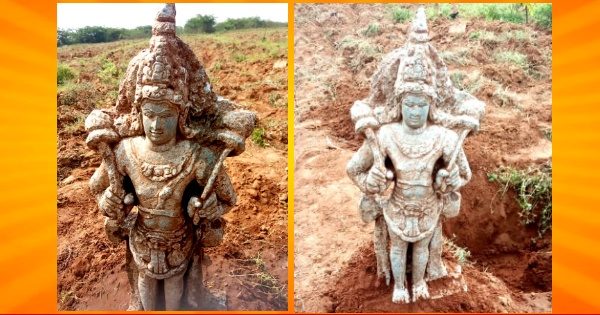 A visit to any ancient standing abodes of deities will ship one to the bygone era. Every ancient temple is history in stone where the carvings in the walls, pillars and lintels not only carry the legacy of our thousands of years old cultural identity but also reflect lifestyle, culture, and related paraphernalia of those times. Lakhs of temples adorned every region of the country; over a period of 1000 years, lakhs of these temples were vandalized and razed to the ground, moortis and carvings desecrated and decapitated by Islamic invaders. Yet, every time the saviours of Dharma rose, resisted, defended, restored and rebuilt many of these temples. Lakhs of temples still lie in ruins across the country. During these 1000 years, Hindus hid many Moortis of deities under water and under the ground whenever an attack by Islamic invaders occurred. Faith undeniably triumphed over fanaticism.

Recently, on 30 October 2020, a sculpture of Sun God was discovered in a farmland at Kalagodu village in Gummagatta mandal of Anantapur district in Andhra Pradesh. The farmland that belonged to Harijan Vannurappa, is located on the banks of river Vedavati. It was while tilling the land that Vannurappa’s son Nagendra came across the sculpture. His plough hit the Moorti of Suryadev. A careful digging led him to the discovery of a two-foot granite stone sculpture of the Sun God. Aesthetically carved, Suryadev is seen holding two lotus flowers in both hands. Did this Moorti once adorn the Garbhagriha of a temple in the vicinity? Could this Moorti be hidden underground or under water of river Vedavati many centuries ago? 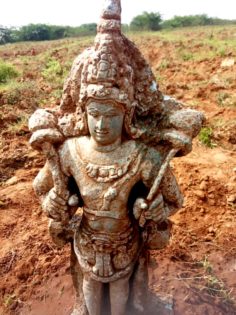 According to a report by The Hindu, Nagendra “immediately informed Rayadurg Heritage Association secretary Gudekota Siva Kumar, who after inspecting the idol and cleaning it, sent pictures of it to historian Emani Siva Nagireddy, who is CEO of Cultural Centre of Vijayawada and Amaravati.”

The Hindu report describes that Emani Siva Nagireddy studied the sculpting style of the Moorti of Sun God and attributed it to the timeline of Nolamba kings. This dynasty ruled large parts of today’s Karnataka and few areas of Andhra Pradesh for over 300 years. According to the Yahoo report, the sculpture of Suryadev dates back to the 10th century. 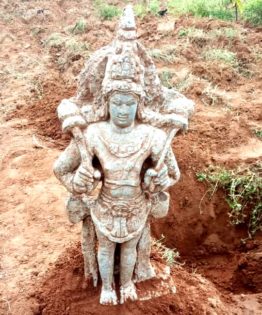 But Vedveer Arya, author of Chronology of India, holds a different opinion regarding the timeline of the Moorti of Sun God. According to him, an inscribed stone found to the north of the site describes about Nolamba kings and not about the Moorti. He adds that the Moorti belongs to either the period of Shatavahanas or Ikshvaku kings of Andhra. Vedveer Arya told the Editor of MyIndiaMyGlory thus, “An Inscribed Stone was found to the North of this site. This inscription belongs to the Nolamba king Maydammarasa. It is written in Kannada language and Telugu-Kannada characters of the 2nd century CE. Interestingly, it mentions the death of a person as Kilgunte (self-sacrifice of a person for the death his master). But this inscription has no link with the sculpture of Sun God. The art of the sculpture indicates the period of Shatavahanas or Ikshvaku kings of Andhra.”

The Chronology of India establishes timelines of Indian historical chronology starting from archaeological evidences of Toba Supervolcanic Eruption in India dating back to 72000 BCE to proto-Vedic period at 16000-14500 BCE, Vedic period at 14500-10500 BCE followed by Adiyuga, Devayuga, post-Vedic period at 10500-6777 BCE to a series of events till the submergence of Dwaraka city of the Mahabharata era at 3126 BCE and disappearance of Sarasvati and Dṛṣadvati Rivers at 3000 BCE. According to the same book, the Shatavahanas flourished from 840 BCE to 334 BCE while the Ikshvaku kings ruled Andhra from 1000 BCE BCE to 850 BCE. There is a major error of several hundred years in Indian historical chronology described in our history books and mainstream narratives. So, going by projections by Vedveer Arya, the Moorti of Sun God discovered recently in Andhra Pradesh dates back to over 2000 years!

The iconography of Suryadev is similar to sculptures found in the region. According to locals, further digging in that area may lead to the discovery of more sculptures of deities. To further quote The Hindu, “…as suggested by Mr. Siva Nagireddy, the idol would be preserved in the archaeological museum in Anantapur. Local Bommakkapalli Rajarajeswari temple priests performed puja to the idol.” 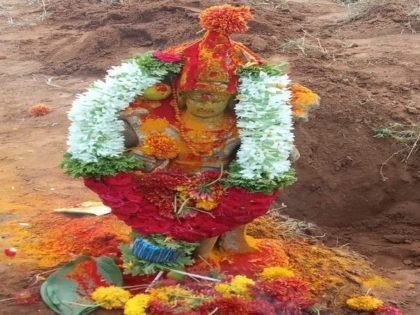 There are many temples dedicated to Sun God in India. The most ancient are the Martand Sun temple, now in ruins after repeat destruction by Islamic invaders, the Modhera Sun temple in Gujarat, and the Konark Sun temple in Odisha, also vandalized by fanatics and now being restored. There are also Sun temples across the world – China, Egypt, Japan, America, Peru, and more regions. Suryadev was one of the most revered of deities worldwide during ancient times. Africans worshipped the Sun as the supreme being with certain tribes attributing the deity as a Goddess. In ancient Egypt, Sun was worshipped as Re, also called Ra; open air solar temples were dedicated to the deity. Armenians worshipped Sun God as Ara and claim to be His descendants. Isn’t this concept in tune with the Surya vanshi or the solar dynasty in India? Aztecs worshipped Him as Tonatiuh; their solar calendar was similar to that of the Mayans. Ancient Arabians worshipped the Sun as Goddess Shamsun. Baltics also worshipped the Sun as a Goddess called Saule. Celtics over time worshipped the Sun both as a God and a Goddess. The Chinese worshipped the solar deity as Taiyang Shen. The Winter Solstice was the festival of the Sun God, attributed to Mithra in Avestan and Roman literature, which corresponds with the Aditya festival in India. Aditya is another name of the Sun God. The Adityas are the sons of mother Goddess Aditi. And the list goes on.

India’s rich cultural legacy takes us by surprise us every now and then…..