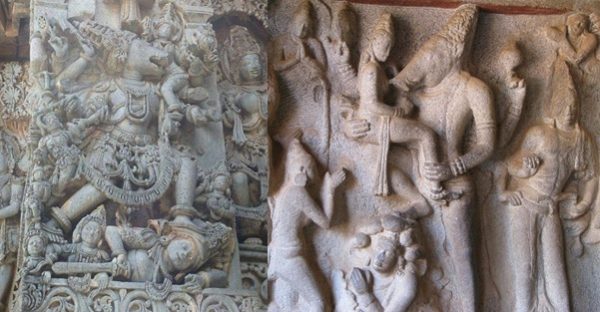 One of the oldest archaeological proofs of the Varaha are found in Mathura, dating back to the 1st and 2nd century CE. A detailed sculpture of Varaha is found in the Udayagiri Caves near Vidisha in Madhya Pradesh. Twenty rock-cut caves, dating back to the 5th century CE mark the splendor of Udayagiri Caves. The dates are corroborated by inscriptions. The iconography link the construction of these cave temples to the Gupta period. Cave 5 of the Udayagiri Caves has a Varaha temple. The sculptures narrate the story of Vishnu, Varaha, and Bhumi Devi. It narrates how Varaha saved Bhumi Devi from plummeting deep into the depths of the cosmic ocean.

During Satya Yug, prior to Treta Yug and Dwapar Yug lived an Asur king called Hiranakshya. He created chaos in the three worlds, terrorizing humans, saints, and the Devs alike. The Devs, led by Indra, approached Vishnu for help. Hiranakshya, cognizant of the plan, hid the earth by pushing her off her axis so that Vishnu could not find her.

When Hiranakshya touched Bhumi Devi and pushed her, an Asur took birth out of the contact. He was Narakasur, also called Bhaumasur. Bhumi Devi plunged deep inside space. It was then that Lord Vishnu incarnated as Varah, a boar. Before the earth plummeted further, the Lord held the earth in his horns and pushed her back in her axis. This was followed by Vishnu’s killing of Hiranyaksha. 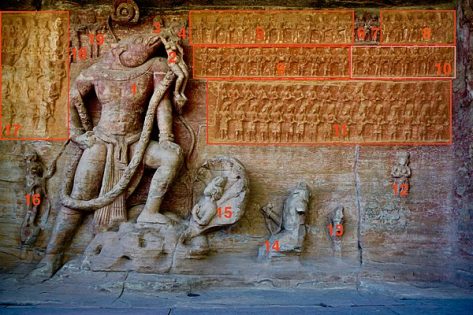 Rohit Arya, who blogs on Indian culture writes, “In the Valimiki Ramayana, both Kumbakarna and Vibheeshana scold Ravana severely for kidnapping Sita Devi. Kumbakarna used even harsher language than the younger brother. I do not recall in which version this following story was first narrated but before he went to die at the hands of Shree Rama, Kumbakarna tried once more to make his brother see sense. Finding him obdurate he told him to come into the jungle behind Lanka. There he showed an odd structure, a huge hill shaped like a massive dome. It was covered up by vegetation but when scraped away, it was revealed to be pure gold!

Ravana was puzzled that he had no idea such a weird thing existed on his island kingdom and how did his perpetually sleeping brother know of it? And anyways at this point of crisis why was time being wasted with golden hills?

So Kumbarkarna had to tell him. “In my last life I was Hiryanyaksha, and you were Hiranyakashipu. When Mahavishnu as the Varaha Avatar fought me in the ocean to rescue Bhudevi, his kundala{earring} fell off in the combat and landed here. This hill which dwarfs even me was his kundala in that age! And that Mahavishnu, of such colossal power, has now come again in the form of Rama. You and I are both dead Brother, unless you return Sita. I remember my past life which is why I know of this place. Renounce this folly or we will both come to the same bad end as last time” but Ravana of course was coiled in his fate and refused to listen even then.

Of all the ten avatars of Shree Mahavishnu his third avatar as Shree Varaha Murti is supposed to be the most powerful, even more than the Shree Narasimha avatar. At one time, his temples were ubiquitous over the land. Oddly the only people who tap regularly into that zone of strength today are the Tantriks who invoke Sri Varahi Devi, the shakti aspect personified as a Goddess. When Shree Varahaswamy temples were commonplace it was the Golden Age of Hindus.”

There are twenty three Varaha temples in India out of which three exist in Kerala. A Varaha temple exists within the premises of the Khajuraho group of monuments.

The Sreevaraham Lakshmi Varaha Temple, also known as Sreevaraham Temple, is believed to be 5000 years old. It is located at Sreevaraham in Thiruvananthapuram. The principal deity of this temple is Varaha. The third avatar of Vishnu is seen here in sitting posture along with Lakshmi Devi. The sub-deities are Ganapathy, Sree Krishna, Nagarajah, Yakshiamma. Hence the name Lakshmi Varaha Temple! Only few temples depict Varaha with his consort Lakshmi Devi.

Varaha tramples the fallen demon with Bhudevi on his shoulder. A sculpture of the avatar of Vishnu at Hoysaleswara Temple, also called Halebidu temple, the largest monument in Halebidu, Karnataka. Dedicated to Shiva, this temple was built during the 12th century by Hoysala king Vishnuvardhana. 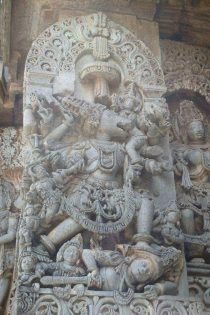 The second image is a rare right-facing Varaha holding Bhudevi. This sculpture is from a group of monuments at Mahabalipuram in the coastal resort town of Mamallapuram, Tamil Nadu.  The site has 400 ancient monuments and temples which were built during the 7th and 8th centuries by rulers of the Pallava dynasty. 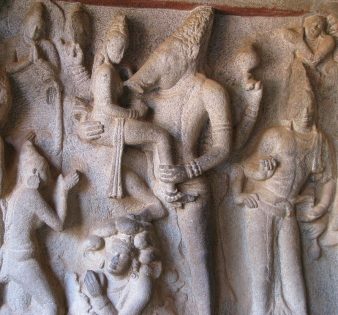 Note: Part of this write-up (4th to 7th paragraphs) is directly sourced from posts on Varaha written by Rohit Arya.

Anish Sreenivasan Naidu is a Nationalist by heart and soul. He is a History enthusiast and very passionate about ancient Hindu Sanatana Dharm.