How Heliodorus, a Greek, Built Vishnu Stambh and Temple 3300 Years Ago 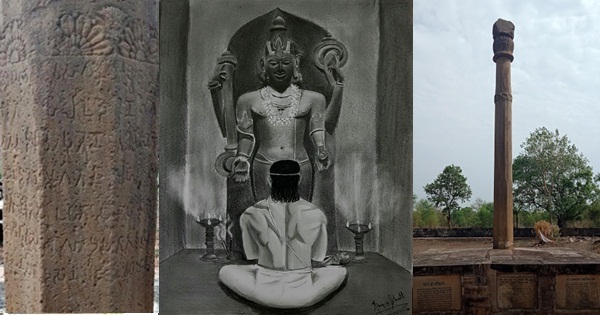 Vidisha! The very utterance of this ancient city of Madhya Pradesh will transport you to the timeline of the Mauryas, Shungas, Guptas, Gurjar Pratihars, Paramaras, and various dynasties. This city was part of their vast kingdom that encompassed vast regions. Vidisha has remnants from the glorious past in the form of monuments and structures that date back to at least 3300 plus years.  One of the earliest existing monuments is the Vishnu Stambh erected by Greek Amabassador Heliodorus, also known as Heliodorus Pillar. Local fisherman worship the pillar in the name of Khamba Baba.

Bhagabhadra, also known as Bhagavata, was the ruler of this part of India under the Shunga dynasty when Greek ambassador Heliodorus visited his court. The Shunga ruler’s empire extended across northern, central, and eastern India with capital at Pataliputra. Vidisha was his second capital city, as he often held court in this region of his kingdom. Heliodorus met Bhagabhadra at Vidisha.

Bhagabhadra was the fifth of the Shunga rulers; he finds mention in the Puranas. Inscriptions at the Heliodorus pillar or Vishnu Stambh describe him as the son of the princess of Kashi (modern Varanasi). What is the timeline of Bhagabhadra? He reigned around 1365 BCE. This timeline is as per the book Chronology of Ancient India authored by Shri Vedveer Arya. This book sets the correct chronological historical timeline of various dynasties from ancient to medieval era  based on Puranas, archaeological evidences, epigraphical and inscriptional records, literary sources, and more references. The Shungas ruled from 1459 BCE to 1346 BCE. But according to distorted datings, found in various sources stamped as correct by the West, Bhagabhadra ruled around 110 BCE. There is a huge difference of over 1200 years! Distorted historical datings, imposed by the West during colonial rule, have a vast difference of 300 to 13,500 years and more when compared to our own authentic datelines. According to them and few Indian historians, the Vedic era flourished between 1500 BCE to 600 BCE; which is distorted and fixed by them in line with their Biblical theory of the year of creation at 4004 BCE.

Close up view of inscriptions in Heliodorus Pillar

When did Heliodorus meet Bhagabhadra? According to the revised edition of the book Chronology of Ancient India by Shri Vedveer Arya, Heliodorus visited the court of Bhagabhadra in Vidisha in the 14th regnal year; the Shunga ruler ruled from 1388-1356 BCE. Hence, Heliodorus Pillar must be dated around 1374 BCE (Vedveer Arya has the sources and evidences in his book to prove the chronological datings he arrived at). Not many, not even most of the localites of Vidisha, know about the historicity and significance associated with this pillar.

Heliodorus worked as a minister at the court of Antialcidas, the Indo-Greek King of Taxila. Inscriptions at the Heliodorus pillar or Vishnu Stambh describe him as the son of Dion of Taxila. Antialcidas was a contemporary of Bhagabhadra. After the Mauryas, the Greeks ruled Taxila; they combined Greek and Indian languages and symbols in their coins and literature besides combining Greek and Indian ideas in the buildings they constructed. Hence, they are also called Indo-Greek or Graeco-Indian. Many rulers maintained national and international relations. Heliodorus being sent to the court Bhagabhadra by Antialcidas as an ambassador is one such example. This legacy of international relationship followed in ancient times continues till today. We have ambassadors from different countries in India and Indian ambassadors are employed in respective countries. 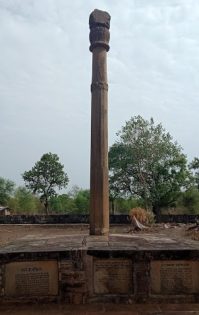 The Greek ambassador was so mesmerized by the Vedic customs and rituals and was so influenced by the philosophy of the ancient Indian scriptures that he embraced Hinduism soon after. He became a devotee of Bhagwan Vishnu. He was one of the earliest Westerners to convert to Vaishnavism, the evidence of which has survived in the inscriptions of the Vishnu Stambh he constructed. He expressed his interest to Bhagabhadra of erecting a Vishnu temple and a Vishnu Stambh, dedicated to Vishnu. The Shunga king gave in to his request and donated land for the purpose in Vidisha. Heliodorus built a square shaped Vishnu temple with the Vishnu Stambh  surmounted by a sculpture of Garuda at the front. The Vishnu temple was destroyed, probably by the ravages of time and weather. It is greatly possible that it might have been destroyed by Islamic plunderers.

Numerous temples in the vicinity including the idols of deities in Udaigiri caves and the huge Beeja Mandal temple (Cambodia’s Angkor Vat of India) was destroyed by Islamic plunderers including Aurangzeb in succession. The robustness of the pillar helped survive the plunder and destruction. Ground foundation base of the temple is still there. Few artefacts of the temple find a place under a tree in the premise while few including the sculpture of Garuda find a place in the Gujari Mahal Museum in Bhopal. 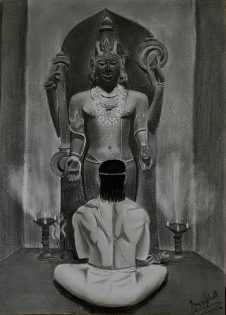 The Vishnu Stambh, in pinkish-brown sandstone, is inscribed with details about its historicity in Brahmi script in Sanskrit and Prakrit language. There are two inscriptions in this Stambh, standing at 6.5 m. Locals say, another 6.5 m of the pillar is at the foundation base. The first inscription describes about Heliodorus, Bhagabhadra and the Shungas’ relationship with the Greeks of Taxila. The second inscription describes the philosophy of the Vedic faith that Heliodorus adopted and followed. These inscriptions are two of the earliest records related to Vaishnavism.

At the first glance or even after repeat glances, one who is not not very familiar in deducing from the Brahmi script may find it difficult to know what’s inscribed in the pillar. According to the Annual Report of the Archaeological Survey of India for the year 1908-1909 published at Page 129, here are the inscribed words.

Artefacts from temple (only the base foundation is there at present)

This Garuda-standard of Vāsudeva, the God of Gods
was erected here by the devotee Heliodorus,
the son of Dion, a man of Taxila,
sent by the Great Yona King Antialkidas, as ambassador
to King Kasiputra Bhagabhadra,
the Savior son of the princess from Varanasi,
in the fourteenth year of his reign. 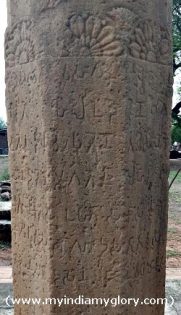 A more closer look at the inscriptions from an angle

The Journal of the Royal Asiatic Society – London (JRAS, Pub., 1909, pp. 1053–54) describes that the inscriptions are in ancient Brahmi script and translates thus:

“This Garuda column of Vasudeva (Vishnu), the god of gods, was erected here by Heliodorus, a worshiper of Vishnu, the son of Dion, and an inhabitant of Taxila, who came as Greek ambassador from the Great King Antialkidas to King Kasiputra Bhagabhadra, the Savior, then reigning prosperously in the fourteenth year of his kingship. Three important precepts when practiced lead to heaven: self-restraint, charity, conscientiousness.”

For an avid heritage traveler like me, visiting the Vishnu Stambh site built by Heliodorus is no less than a pilgrimage. My gratitude to Shubham Verma, Deepak Vishwakarma and Sumit Singh (all residents of Vidisha) for being there with me during the site visit. Thanks Indic Academy for facilitating this trip to Vidisha for a talk on my book Saffron Swords (buy link: http://grpr.in/swa).

All images clicked by author. Sketch of Heliodorus worshipping Bhagwan Vishnu is done by Rikey Bhatt, Artist/Painter from Mumbai.