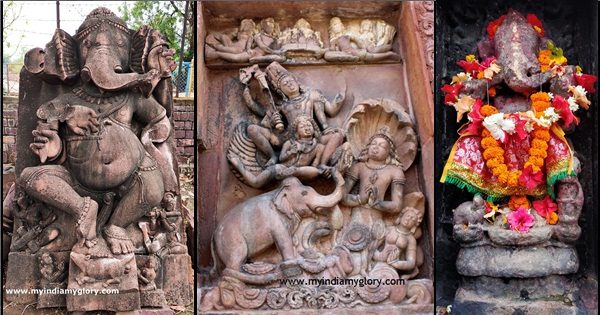 He is the son of Shiva and Parvati. He is known by many names – Vinayaka, Vighnaraja, Vighnesha, Dvaimatura, Avighna, Buddhipriya, Ganapati, Gajakarna, Gaṇadhipa, Ekadanta, Gaurisuta, Heramba, Lambodara, Lambakarna, Gajanana, and more. He is the God of beginnings, the remover of obstacles, patron of letters, arts, and the sciences. Rituals and ceremonies start with His invocation. He is revered in Hindu, Buddhist, and Jain traditions. He is Shri Ganesha. His vahana is the mouse.

Ganesha finds mention and description in the Rigveda, Ganesha Purana, Mudgala Purana, Ganapati Atharvashirsa, Brahma Purana, Brahmanda Puran, Maitrayaniya Samhita, Taittiriya Aranyaka, Mahabharata, Ganesha Sahasranama, and more texts. The earliest iconography of Ganesha in stone is found in caves and temples from the Gupta period. According to Vedveer Arya’s Chronology of India, the Gupta era flourished during the last 300 years of BCE. Going by this calculation, earliest Ganesha in stone dates back to over 2000 years.

Besides, Ganesha, the elephant finds a prominent place in scriptures and history. Airavat, the elephant that emerged during Samudra Manthan – the churning of the ocean, is Indra’s vahana.  Ancient Indian texts describe how Gajendra, the king of elephants, was liberated by Bhagwan Vishnu; this episode is known as Gajendra Moksha. Earliest depiction of elephants in Indus Valley seals and as figurines was discovered in Harappa, which date back to 4000 plus years. Iconography of elephants are common in ancient and medieval era temples and historical sites. Elephants were used in wars in ancient and medieval India. The elephant also finds a place in the flags and emblems of several countries. 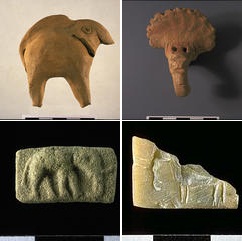 The recent brutal murder of a pregnant elephant in Malappuram district of Kerala questions humanity. The elephant suffered in silence for more than a week after barbaric locals fed her a pineapple stuffed with firecrackers. The crackers exploded in her mouth causing her severe injuries in the jaw. And when death was near, she stood in a river, silently embracing it, so that her baby elephant in her womb was not hurt. The emotions of a dying mother for her unborn child cannot be expressed in words. Besides, the water provided her some relief from the burns. Wild elephants often charge at humans when they are angry and in pain. But this elephant did no harm to any being.  There have been many cases of elephant deaths in Kerala, a state where elephant is the state-animal and where the emblem has images of two elephants. Harming and killing the elephant is against Sanatana Dharma. This incident not only hurt the sentiments of Hindus but also animal lovers/activists and everyone who reveres it.

Here is a partial glimpse of Ganesha and Gaja in stone in caves and temples based on our site visits.

Few of the ancient existing carvings of Ganesha in stone in the northern part of India survive in caves from the Gupta period. Ganesha is often portrayed on one side with the Saptamatrikas – the seven  Mother Goddesses with Vinadhara Mahadev flanking the other side. Attached is a carving of Ganesha with the Saptamatrikas and Shiva with the Vina at Raj Ghati at Dewgarh fort complex on a hilltop, a forest area spread across several kms in Uttar Pradesh. 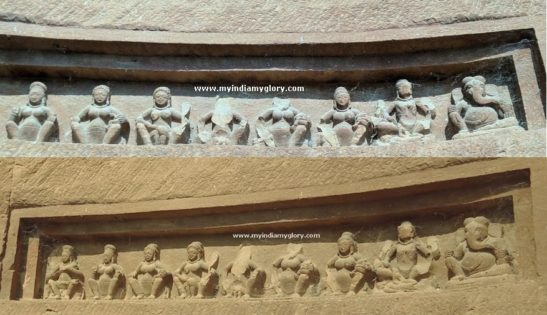 The Saptamatrikas in the above panel are Brahmani, Vaishnavi, Maheshvari, Indrani, Kaumari, Varahi, Chamunda, and Narasimhi. Few of the sculptures of the Matrikas are mutilated. Saptamatrikas find mention in the Rigveda (they control the preparation of Soma), the Mahabharata, and more Hindu scriptures. Indus Valley seals also portray Mother Goddesses.

Attached below is another panel of Ganesha with the Saptamatrikas and Mahadev kept in an open museum in Ashapuri, Madhya Pradesh. The panel that once adorned a temple, dates back to 1000 plus years.

Ganesha with Saptamatrikas in a panel exhibited in an open museum in Ashapuri, Madhya Pradesh; Click by Manoshi Sinha

Saptamatrika sculptures with Ganesha also adorn Udaigiri Caves in Vidisha MP, Panchalingeshvara temple in Karnataka, Parashurameshvara temple in Odisha, and few more places. While few temples portray them individually, most Saptamatrikas are portrayed together and flanked by Mahadev on one side and Ganesha on the other.

Attached below is a Moorti of Panchmukham Ganesha under a tree in Maa Koniamman temple premise dedicated to Mahisasur Mardini in Coimbatore, Tamil Nadu. The present structure of the temple dates back to 600 years while its historicity dates back to the 13th century. The Moorti of Maa Koniamman is shown with eight hands holding a trident, discus, sword, membranophone instrument (udukkai), bell, scull, and fire. She is the guardian deity of the region. Devotees believe She blesses everyone who seek Her blessings. 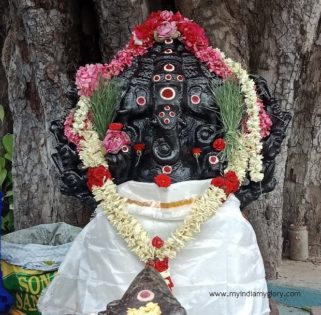 Panchmukham Ganesha under a tree in Maa Koniamman temple premise in Coimbatore; Click by Manoshi Sinha

The temple was originally built as a fort shrine with Maa Koniamman as the presiding deity by a local chief Covan of the Irulas tribe. It is believed the deity saved the tribe from invaders. After the rule of this tribe ended, the temple was in ruins. The Mysore rulers, amazed at the sheer architectural grandeur of the site, renovated the temple and since then looked after its maintenance. They reshaped the Moorti of Maa Koniamman in the style of Mahisasur Mardini.

One of the temples at this site has Vigrahas of deities of Shakti dating back to 1000 years. A gopuram is at the outer entrance while one is at the inner entrance. There are also shrines dedicated to the Navagrahas with their consorts. Besides Moorti of Panchamuka Ganesha, there are also Moortis of Adhi Koniamman and Bhagwan Murugan with His consorts Valli and Deivanai. This is the only temple that celebrates the temple (rath) car festival. This fourteen-day festival that falls in February-March celebrates Maa Koniamman, with the rath traveling across the city and then to the temple.

Attached below is a huge Moorti of Ganesha excavated in Banpur, Uttar Pradesh. The Moorti, dating back to around 10th to 11th century, is preserved in a newly built temple where locals regularly offer puja. The devotees have painted the Moorti in red. 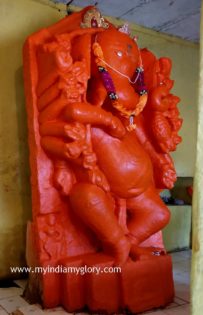 At this site and more sites in Banpur region, such broken moortis of Mahadev, Nandi, Vishnu including broken panels and pillars of ancient temples are in abundance. Salute the efforts of locals who have assembled these moortis for worship. One huge moorti of Shakti is also in good condition; She adorns a temple in that village. There are also two huge sculptures of Nandi. If these sites are excavated, we shall be enriched with many more historical facts and treasures.

Cave No 10 in Udaigiri Caves in Bhubaneshwar, Odisha is known as Ganesha Gumpha. There is a carved figure of Ganesha on the back of the right cell of the cave. The entrance of the cave has statues of two big elephants on either side carrying garlands. At the inner entrances are carved figures of dwarpalas.  The carvings in Ganesha Gumpha describe the love story of Udayana of Kausambi (capital city of Vatsa kingdom, a Mahajanapada) and Bassavadatta, the princess of Ujjayini and their elopement. 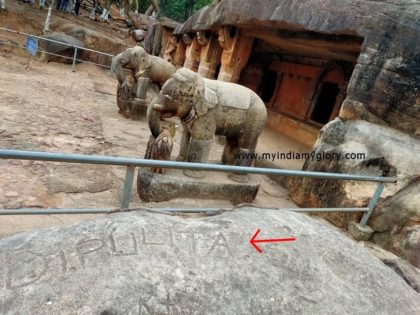 Notice the inscribed name shown by red arrow in the boulder adjacent to the cave. How could someone do this! ASI guards should strictly keep watch so that such acts are not repeated in the future. The two caves Udayagiri and Khandagiri located in two adjacent hills find mention as as Kumari Parvata in the Hathigumpha inscription. Most of the carvings and construction of the ornated structures took place during the reign of Raja Kharavela. While timeline of Kharavela is projected as 2nd century BCE, i.e. 2200 years ago, Vedveer Arya’s Chronology of India describes his rulership around 11th century BCE. The author provides various evidences to justify his point. Going by the dating described in this book, the site here dates back to at least 3000 years.

A wonderful carving of Gajendra Moksha adorns a wall panel of the ancient Gupta era Dashavatar temple located in the Betwa River valley at Deogarh in Uttar Pradesh. The story of Gajendra Moksha is described in the Bhagavat Purana in the form of a narration by Shuka (son of Rishi Vyas) to Kuru Raja Parikshit. Gajendra achieves Moksha, attains the form of a Deva and accompanies Vishnu to Vaikuntha. According to Puranic History, Gajendra was Raja Indradyumna in his past past life who was cursed to be reborn as an elephant and the Makara was a Gandharva Raja named Huhu, who was also cursed to be reborn as a crocodile. Both attained Moksha through the blessings of Vishnu. 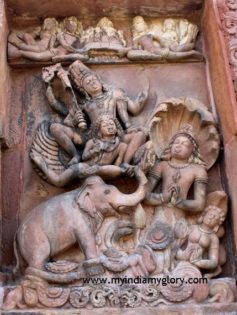 The Dashavatar temple with a simple, one cell square plan, is the only standing shrine in ruins at the site. The site originally had nine temples with a Garuda stand in front of the main temple of Vishnu. Bases of all the eight temples and the Garuda stand are still visible at the site. The Vishnudharmottara Purana finds mention of a ‘Sarvatobhadra temple’ with nine sikharas. The description about this temple exactly matches with this Dashavatar temple at Deogarh. There is also a kund in the temple premise.

Several carvings of Ganesha adorn the wall panels of the 7th-10th century Neelkanth Mahadev temple in the Sariska Tiger Reserve hills in Alwar, Rajasthan. According to the Rajor inscription in Nagari-Sanskrit, this temple was consecrated in 961 CE by Raja Mathanadeva, described as a Gurjar Pratihara ruler in the same inscription. 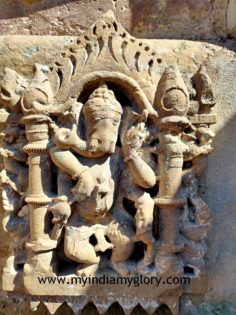 Carving of Ganesha in the wall of Neelkanth temple, Alwar, Rajasthan; Click by Yogaditya Singh Rawal.

The Pundit Ji, whose ancestors have been serving Mahadev here since centuries, narrated to us (me and Yogaditya Singh Rawal) how there once stood around 360 temples scattered across that region. He said the region was once part of the Virat Nagari where the Pandavas spent the last years of their exile. According to his account, the Pandavas brought here a Shivalinga, and Moortis of Kal Bhairava and Shakti from Kashi. The origin of these three temples housing the three deities including Neelkanth thus dates back to the Mahabharata period though structures existing now date back to 7th-10th century.

Aurangzeb vandalized all the 360 temples, but they could not destroy the Garbhagrihas of the three main shrines. The Mughals couldn’t destroy the hall and adjacent Garbhagriha of Neelkanth temple, as a swarm of bees attacked them. Most of them stung, they fled from the spot. Dara Shikoh stopped Aurangzeb and questioned him why he was destroying the temples. In reply Aurangzeb took him prisoner and kept him confined in the Kankwari Fort, not very far from this site.

A huge Moorti of Ganesha lies at a corner in the open museum in Ashapuri, Madhya Pradesh. The lower base of the Moorti has sculptures of devotees praying and few devotees playing the musical instruments dhol and bansuri. This Moorti of Ganesha dates back to over 1000 years. 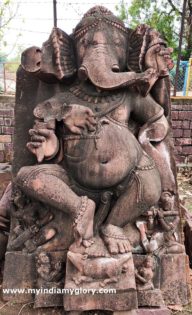 This open museum has ruins of four ancient temples dating back to 1000 to 1800 plus years from the region. The temples were vandalized and razed to the ground by Islamic plunderers. Signs of desecration are visible in this Moorti too.

Unakoti near Kailasahar in Tripura has huge rock carvings of Ganesha, dating back to several centuries. A huge 9th-11th century Moorti of Ganesha was excavated in the Northeast few years back. Ganesha also adorns Garbhagrihas in medieval era temples. There are thousands of Moortis and carvings of Ganesha adorning temples across the country.

The above iconography of Ganesha and Gaja with a historical description is only a partial list of the carvings we came across during our research visits. Most of these sites that adorn the carvings are in a neglected state.