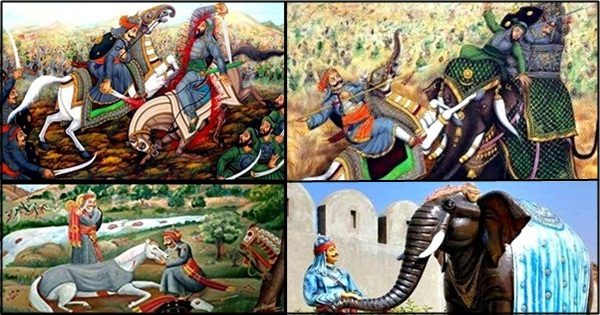 Mughal ruler Akbar always looked opportunities to use Indians against Indians in battle to create further divisions between them. While most kingdoms surrendered to his supremacy and became vassal rulers, Maharana Pratap neither recognized Mughal supremacy nor agreed for any meetings or alliances.

Akbar decided to use Rajputs against Rajputs. To quote from Saffron Swords, Akbar “sent Man Singh as his emissary to Mewar. He wanted Rana Pratap to acknowledge him as the emperor and wanted Pratap to be his vassal, just like Man Singh. Maharana Pratap did not pay heed to any of the logics and schemes put forward by Man Singh. The mission failed; then something happened which brought war to the gates of Mewar even earlier than predicted”.

“During his stay in Mewar, Man Singh was invited to a royal dinner. Maharana Pratap refused to join him on the pretext that kings dine only with kings and Man Singh was just a crown prince and that too, of a vassal state of the Mughals. Pratap sent his son Amar Singh for the dinner. Man Singh considered this to be an insult and left. He started advising Akbar to attack and depose Maharana and capture Mewar. Akbar was already looking for a moment like this. He quickly ordered an attack on Maharana Pratap. Akbar himself did not lead the army. He entrusted the task to Syed Hashim of Barrha along with his brothers and Man Singh.”

It was the year 1576. In the Mughal Army, Man Singh himself was a commander ranking 5000 horse and other ancillaries. Syed Hashim was another commander matching him in stature. Mughal army was also supplemented by the Kachchwaha forces. Rao Lunkaran of Sambhar brought his Rajputs to the Mughal fold too. Gazi Khan of central Asian provinces joined Akbar. And the kinsmen of famous Salim Chishti of Fatehpur Sikri were also there present with their followers. 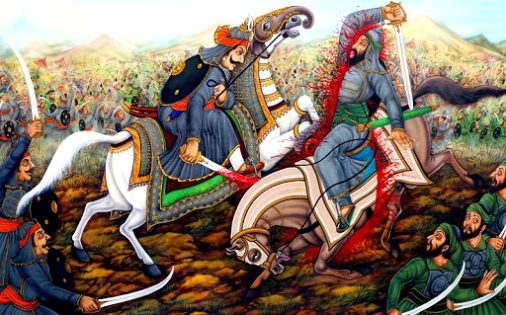 Here is an excerpt from Saffron Swords on this scene:

“Advance reserve and vanguard of Mughals had been already pressed into service. Vanguard of Mewar under Ram Das Rathore, Hakim Khan Sur and Bhim Singh clashed head on into the rushing Mughals. After decimating the Mughal left flank, Ramshah Tanwar wheeled to his left to join Pratap in the centre. The Mughal van managed to attack Rana Pratap with Behlol Khan leading the charge.

Pratap himself came forward to counter him; what happened next froze the blood in the veins of onlookers. Before Behlol Khan could even complete his blow, Pratap seated on his favorite horse Chetak delivered a sword blow on the helmet of Behlol Khan. The blow was struck with such ferocity and precision that Behlol Khan was vertically cut into two pieces along with his helmet, armour and even his horse.”

This martial art technique is an ancient art passed down from Mahadev, Kali and the Sanatan deities – the art now known as Sanatan Shashtra Vidya. Mughal army was petrified and their charge withered. Pratap found the right opportunity to move to the Mughal centre after this.

After the Mewari king cut Behlol Khan into two pieces, the Mughal army was petrified and their charge withered. Here is an extract from Saffron Swords on this scene. Maharana Pratap found the right opportunity to move to the Mughal centre. Bhim Singh of Dodia was ahead of him already cleaving his way into the centre of Mughals. Bhim Singh reached there first and charged Man Singh who was seated on an elephant. In the ensuing tussle, Bhim Singh was killed. 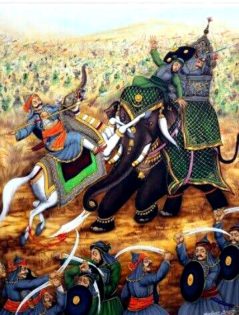 Sensing trouble, the rearguard led by Mehtar Khan came to the fore to aid Man Singh. Meanwhile, Maharana Pratap had reached the scene, seeing Man Singh. Pratap attacked him. Chetak was a fearless steed and planted its front legs on the trunk of the elephant. He threw his spear at Man Singh. The mahawat of Man Singh came in between and was pierced. The force of the blow broke even the howda of the elephant. Man Singh was saved due to the sacrifice by his mahawat. This incident rattled him but his dwindling forces were bolstered by the arrival of Mehtar Khan whose soldiers now surrounded Pratap.

Chetak was already wounded by a sword cut on hind leg which was caused by the sword tied to the trunk of Man Singh’s elephant. Maharana Pratap was also wounded by now by a musket shot as well as a spear and a sword cut. Ram Shah Tanwar tried to come to aid of Maharana. While trying to reach there, he was killed by Jagannath Kachchwaha in the melee.

Meanwhile, sensing his Maharana in danger, Jhala Maan raced to his help and reaching there, he quickly snatched the royal banner from Pratap which confused the Mughals. They thought of Jhala to be Pratap and fell upon him. Jhala attained his martyrdom fighting meanwhile Pratap retreated from the battlefield. 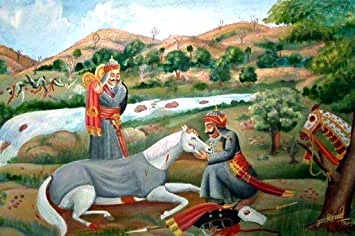 Pretty quickly Mughals realised their fault and pursued Maharana Pratap. Chetak was wounded badly but still took his master to safety. Pratap reached a rivulet which was quite wide for a horse to jump; still Chetak jumped and crossed it but died soon after. There is a cenotaph erected in the memory of this most famous horse of Indian history at the spot.

The Battle of Haldighati between Maharana Pratap of Mewar and Akbar’s Mughal forces introduces us to two extraordinarily loyal animals – Chetak, a horse and Ram Prasad, an elephant. Chetak is a name synonymous to Maharana Pratap, but not many of us know about Ram Prasad. While a badly wounded Chetak carried his master Pratap to a safe place away from the battlefield of Haldighati and attained martyrdom, Ram Prasad was caught by the Mughals.

It was not easy to subdue the battle-hardened Ram Prasad in the Haldighati battlefield that had facilitated wound and death of many Mughal soldiers and elephants. A chakravyuh of several mahouts with their elephants led to capture of Ram Prasad and was taken to Akbar. 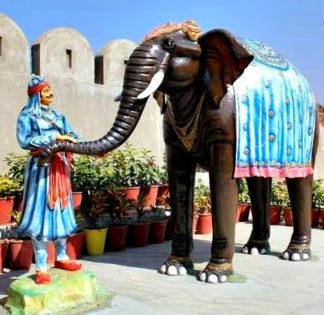 Akbar was so awestruck after listening to Ram Prasad’s feat in battlefield that he wanted to own him. He changed Ram Prasad’s name to Pir Prasad. He ordered that special care be given to Pir Prasad. The Mughals gave juicy sugarcanes and special food to the elephant but he was so loyal to Maharana Pratap that from the day he was caught he did not eat anything, not even water! Ram Prasad died of hunger after 18 days. Seeing the loyalty of Ram Prasad, Akbar had said that when he could not overpower even an animal loyal to Rana Pratap, it was impossible to overpower Rana Pratap.

Maharana Pratap was one of the bravest Rajput warriors who never recognized Mughal supremacy and never agreed for alliances to be vassal rulers. After the Battle of Haldighati, he regained major parts of Mewari territory from the Mughals.

Key Ref (most text put as it is from the book): Saffron Swords (click here for the book) by Manoshi Sinha Rawal and Yogaditya Singh Rawal.