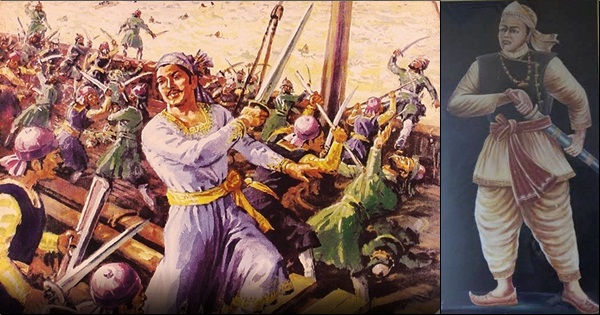 The Ahom dynasty of Assam managed to stave off invaders for upwards of four hundred years from 1228 to 1671.  There were no more invasions after the Mughal invasion under Ram Singh was soundly defeated in the famous Battle of Saraighat by Lachit Barphukan.

This battle is extremely unique in India’s history – fought not on land or the sea but in the middle of a river . The mighty Brahmaputra was the theatre of this Mughal – Assam showdown. Saraighat was the final grand climax to a series of events stretching over several years. This blog of mine – Lachit Barphukan, gives a detailed description of events leading to Battle of Saraighat.

I do not intend to repeat them here. Instead, in this article I shall throw light upon the Ahom naval system and further more , try and understand the challenges that must have been faced while fighting on that mass of water , drawing on my knowledge of how boats and ships behave in a river.

The biggest plus point of the Ahom dynasty and its long history of successfully defending the Brahmaputra valley was that they were not personality driven , but policy driven. Keeping invaders west of the Manas river was something all rulers aimed for. Further more , the paik system ensured that each family in the Brahmaputra valley compulsorily contributed men to the army when so demanded. There were then khels or guilds for various activities – both military and civil. This was the agreed upon system , and the monarch or swargdeo had thousands at his beck and call at any given time. The military followed a set heirarchy of ranks – from the Deka controlling 10 paiks to the Phukan lording over 6000.

Thus defense of the land was not according to whims and fancy of sundry jagirdars and watandars. When a dynamic personality like Lachit Barphukan was added to this , the Ahom military system became near invincible in face of great adversity.

Secondly, the Ahoms made excellent use of the terrain and developed perhaps India’s only “river specific” navy ! It is one thing to have certain terrain around you , something else to harness it fully. Today in 2016 you will be hard pressed to count twenty boats plying the waters near Guwahati, but back in 1663 , the official Mughal waqnavis counted 32,000 boats as having passed the town in one month! Inside out knowledge of the terrain was what made the guerilla warfare highly effective and deadly. Infact , they called it “Daga Yuddha”  ! An extremely apt name for the kind of warfare.

The Ahom navy was overall led by the Pani Phukan . Even towards the close of the Ahom dynasty this rank held sway over 7000 sailors !   Smaller units operated under the Bar Neogs . The Pani Phukan was directly under the Barphukan – the supreme leader of the armed forces . The Barphukan could assume control of the naval forces too – as happened in the Battle of Saraighat with telling effect.

Like in the infantry arm, various departments were created even for the river navy arm.

The Naobachia Phukan was in charge of supplying able bodied boatmen . While the Naosaliya Phukan was tasked with upkeep of boat building and the docks. He had around ten docks under him for boat building purposes. These being at Gargaon, Guwahati, Dergaon etc.

Another important facet of fighting on the water was development of a structure known as the well , the “Pani garh”. It was essentially the art of building a bastion or gadhi in the middle of the water without recourse to using an already existing island etc.

Summarizing historian PC Sarma’s words in the book “Martial Traditions of the North East ”, we can say — The Pani garh consisted of first planting stout bamboo poles into the river banks on opposite sides and then joining them loosely with ropes made of Raidongia Bet a kind of coir stronger than jute. After this , platforms of timber would be floated onto the river , improvised upon by soldiers and builders , to function like floating “dam damas”  or small siege towers. Boats could also be used in lieu of wooden platforms.

There is evidence that such a blockage effected during the Battle of Saraighat proved to be very effective. HK Barpujari gives a similar description of such “floating” bastions.

Ahom Warboats – What were they made of ? How large were they ?

They were known as “bacchhari ”  boats and had a single plank of wood to give strength to the keel or base of the boat. Something similar to how ship’s are strengthened today too!

The Ahom warboats were small , not only by today’s standards but by 17th century standards also. At a time when ships of an average length of 50 metre (150 feet) were plying the high seas, the Ahom warboats measured only about 20 metre (60 feet) . Their width was also scarce – just about 2-3 metres (7 feet) But there were sound reasons for this , and as we shall see in the next section, size proved critical in the Battle of Saraighat. 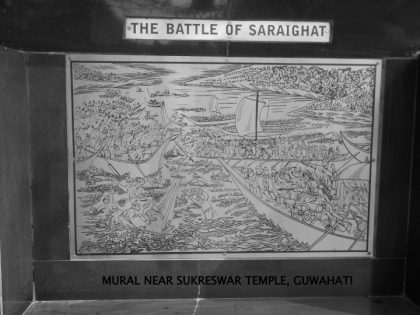 The Ahom boats were made of chambal type of wood. The advantage being that a boat constructed of this wood would not sink even if heavily burdened. Thus an Ahom warboat was able to carry loads upto thirty tons. Which would usually mean a mixture of soldiers and artillery pieces , as seen in “Battle of Saraighat” picture above.

Historian UN Gohain says that Ajhar (Lagerstroemia reginoe) and Sam (Artocar-fins chaplasha) were the specific trees whose wood was used to build the Ahom boats. Planks were joined by nails and gaps filled with a mixture of resin , lac and bee wax. Also lime made of snail shells and jaggery was used for any repairs.  A well constructed boat could last upto ten years or more.

The boat described here was the large 60 feet war boat. Ones equipped with guns were called ” Hiloi Chara Nao ” . Apart from this , a variety of other boats were in use –

Chara Nao – For travelling and transport

Gach Nao – A huge warboat used by Mughals . Extremely slow and cumbersome in a river.

Such and twenty other type of boats for various purposes were prevalent in Assam !

Simply having boats with people on them was not good enough. They needed to have them stocked with artillery too. Make gun – boats that is . In fact the Mughal invasion of Assam could well be called a case of failed “gun boat diplomacy” . Gun boats and armadas were extensively used by British empire to brow beat smaller nations into submission. Hence the adage.

These guns were cast , and much smaller in size than the land based cannons. Infact they more closely resembled the zamburak than the larger tof .  A few samples can still be seen in the museum at Guwahati , they are 2 -3 feet long at best.

The Battle of Saraighat  – An Analysis

Having seen what the Ahom navy consisted of , we shall now turn to the Battle of Saraighat – the acid test of all these Ahom military systems. Lachit Barphukan’s choice of chosing Guwahati to make a decisive stand against the Mughals had sound strategy behind it.

The Brahmaputra is at it’s narrowest at Guwahati. Thus , defending the river there was akin to defending a pass. Further more , the sudden narrowing would also cause an increase in the speed of the water. Thus, the Mughals, approaching from downstream would have to strain more. 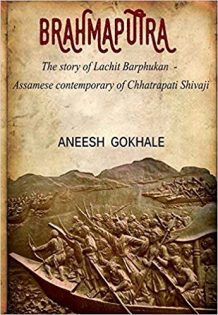 The preference for small boats was also well thought out. Ram Singh went in with 40 huge war boats. In a naval battle on the sea , Ram Singh would have won. But in the river , the ships proved too cumbersome to turn and maneuver. Infact , the Mughal boats – each equipped with sixteen huge guns and manned with the cream of Mughal and European sailors in India, were winning the initial part of the battle. Lachit Barphukan’s illness had meant that the Ahom boats did not leverage their size and mobility in absence of a good leader and were fast getting blown apart. Which is why Lachit Barphukan’s entry into the battle is a crucial turning point.

The smaller boats, hence smaller guns meant that the Ahoms would have had to move close to the huge Mughal warboats. This, especially due to the speed of the water , would have drawn the smaller boats into the larger – a phenomenon known as interaction. That the boats were deftly steered shows the capabilities of people controlling them. Also , when the guns , whether they fired from Ahom or Mughal boats , would have also caused considerable movement of the boat – rocking it violently one side to another. Another aspect to bear in mind when going through this battle.

The river was choc a bloc with boats during the battle – which would have made life for the Mughals even more difficult.

And the end result was a resounding Ahom victory under leadership of Lachit Barphukan.

This article was first published at aneeshbooks.com.

Public speaker, columnist, and author of 'Sahyadris to Hindukush' "Brahmaputra - The Story of Lachit Barphukan'. Sails the high seas for a living.

Puru Defeated Alexander in the Battle of Hydaspes; Here Are Evidences