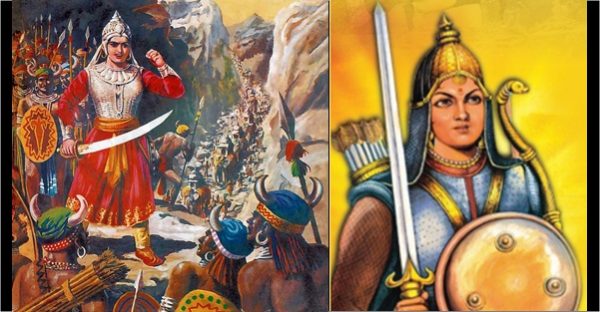 Rani Durgavati was an extremely rare woman who got married when she was 18, widowed at the age of  24, became Queen of a vast Kingdom of mainly tribal people and fought 51 gallant wars against many invaders including the Mughals 3 times. She never lost. She was an exemplary young ruler and a great war tactician who fought against 6 generals and a massive army sent by Mughal ruler Akbar. She showed valor, courage, self-belief, in her battles and treated her people in a gentle manner like a mother providing all amenities.

Rani Durgavati (October 5th, 1524-June 24th 1564) was born into the family of Gurjar Chandela’s Rajput ruler Keerat Pal Singh in the fort of Kalinjar, Banda, Uttar Pradesh. Her ancestor was Vidydhar who was one of the few Indian rulers to have successfully repulsed Mahmud of Ghazni some 400 years earlier. This family also built the Khajuraho Temples which are now a UNESCO World Heritage site. She had been born into a courageous and benevolent family.

She was married in to the Gondi King Sangram Shah’s son Dalpati Shah in 1542. This brought about an alliance between the Gonda family and the Chandelas of Bundelkhand so that they could resist the onslaught of Sher Shah Suri when he attacked Kalinjar in 1545.

She took up the throne on the insistence of the ministers who called upon her to assume responsibility as they were aware of her abilities and wanted the Kingdom to remain independent.  At the time she was only 24 years old and took the reign on behalf of her son Vir Naryan who was 5 when his father, Dilpat Rai died after ruling for only 7 years after his father died in 1541.

Her reign in Gondwana was very benevolent and just for her people as she was a good administrator and fighter. She led her armies of 70,000 people with 2500 elephants being a very able rider of elephants and horses.

Rani Durgavati was not only good in battle but also in the fields managing the cultivation of around 23000 villages making her kingdom self sufficient.

She was victorious against the mighty armies of Surs of Delhi, Baz Bahudur of Malwa, the Afghans of Bengal, and Akbar. According to Abul Fazl she was a good shot with the bow and arrow as well as the Gun. Akbar was very impressed with her as she had defeated Baz Bahadur, Son of Sujat Khan in the West and the Afghans of Bengal in the East which even his own general Munim Khan with 12 other Generals could not overcome the Afghans.
Meanwhile Baz Bahudur had lost Malwa to Akbar so now their lands bordered each other.

Akbar was so impressed with her battles that he wanted to meet her and wanted her to serve the Mughal Empire but she refused to accept the Mughal Suzerainty.

Akbar was furious and ordered his finest General Asaf Khan to mount an invasion of Gondwana and bring the Rani back alive to his court. He also sent another 6 major commanders as he knew that defeating her would not be an easy task.

Asaf Khan went with a massive army with elephants and horses to drub the Rani in to submission.  He started to plunder the borders of her kingdom and buying off her soldiers rather than attack her outright.  He sent spies to investigate her her revenues and expenditure through traders and merchants. Rani Durgwati’s men had pointed out their army was no match to the might army of Akbar but Rani Durgavati maintained that it was better to die fighting than to surrender and live in defeat.

Rani Durgavati had heard that Akbar’s army was at Damoh so she decided to move to Narai Nala with steep hills on the sides and rivers Gaur and Narmada with only a narrow passage of entry to the area as she thighs this would be difficult for the army of Akbar to reach. It was an unequal battle with their modern weapons and trained soldiers against her untrained few soldiers. When the Mughal army men arrived she fought a hard battle in which her Faujdar Arjun Das died. She decided to lead the defense herself. As the enemy entered the valley, soldiers attacked and many were killed but Rani was victorious in this battle. She had successfully chased the Mughal army out.

Two years later Asaf Khan decided to attack her yet again. She wanted to attack them the same night but her generals were not in agreement. By morning Rani rode out on her elephant Sarman to join the battle with her son Vir Narayan who was able to move the Mughal army back 3 times before being injured and at the request of Rani Durgavati to be moved to a safe place in Chauragarh. Rani continued the fight but was hit by an arrow near her ear and one in the neck which she had pulled out. She was aware that she could not continue and asked her Mahut to kill her but he refused to do so. At which point she took the dagger to herself rather than surrender to the army of Akbar. 24th June is considered Martyrdom day in her honour.  Her son was killed in the Fort by Akbar’s army who continued to plunder.

Today only 20 of the Khajuraho temples remain of the 85 that were built by her ancestors.

Madhya Pradesh renamed Jabalpur University in her honour as Rani Durgavati Vishwavidyala. There is also a stamp in he honour and a train named as Durgavati Express from Jabalpur to Jammu Tawi.

Over 500 years ago, Rani Durgavati showed how a young woman had the courage to fight against the might  of Akbar and many other invaders as many as 51 times and at the same time be generous and kind to the people of her Kingdom. She is a rare example of determination, courage, and bravery in the face of adversity can win you through.

She is great role model for young women to stand on their own and be counted.

Deepak Prasher is an Emeritus Professor of Audiology at University College London. He divides his time between London and Trivandrum. He loves traveling, Photography and Indian Philosophy.