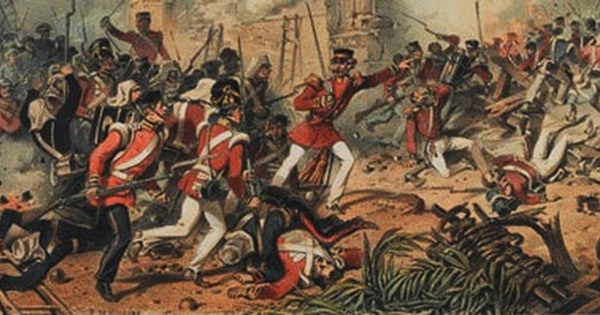 I was in Varanasi recently. One morning I was just going through the newspaper when the door below opened. Tapanda, in his baritone voice called out my name from the ground floor. I asked him to come up. Tapanda is a an expert in the history of Kashi and a very close friend and associate, though very senior. After some meaningless time-killing, I suddenly remembered and asked, “Tapanda, have you seen the article on the Kohima War Cemetery, which is still being maintained by the Commonwealth War Graves Commission?”. He replied in the affirmative. He said even in Varanasi there are such graves. Aroused with curiosity, I quickly prepared another cup of tea, as I knew it is the quickest turn on for him. “Ahh” he said after the first sip. I knew I had history coming. He invited me to Shivala, where used to be my in-laws’ place. One fine evening, I went with Tuki (my daughter). Tapanda was waiting. I witnessed one big graveyard in the midst of a thickly populated locality. They are in a totally dilapidated state. The story of the battle of Shivala goes like this –

Kashiraj Balwant Singh had two queens. The first Gulab Kunwar was a ‘Bhumihaar’ just like the king himself, whereas the second one Panna was a ‘Rajput’, the daughter of Raja Bhim Singh of Dobhi Pargana. The former had a daughter Padma Kunwar, whereas the second one had two sons – Chet Singh and Sujan Singh. Balwant Singh was apprehensive of repercussions from his own Bhumihaar clan, which was preventing him to declare the sons as heirs. He was running the throne by adopting Maniyar Singh, his nephew. Chet Singh, however, was trying to gain importance and had by his side a distinguished Bhumihaar Sardar Ausan Singh, who was actually an ordinary labourer and who was educated and nurtured by Raja Balwant Singh. On the other hand, Maniyar Singh also was under the impression that Ausan Singh was by his side. 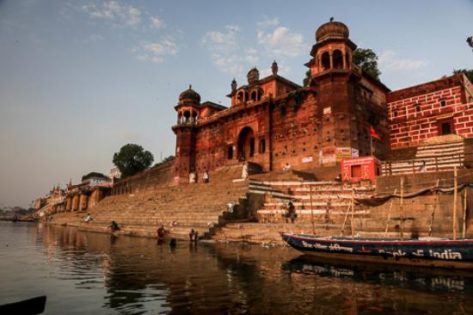 Chet Singh Fort and Ghat on the banks of the Ganga; Image courtesy: TripAdvisor

With the support of Warren Hastings and trials and tribulations, Chet Singh captured the throne of Kashi on 22nd August, 1770. This enraged the Nawab of Ayodhya – Shujauddaullah. He marched towards Kashi. Sensing trouble, Chet Singh met him midway in Jaunpur and convinced him somehow. The Nawab was so pleased that he asked his son Asfuddaullah to establish a brotherly relationship with Chet Singh by exchanging Pugris (turbans). The British viewed it cautiously as they always wanted the kingdoms to fight each other. After the death of Nawab Shujauddaullah in 1774, his son ascended the throne of Ayodhya and as per the new agreement with the Company (East India), Kashi was taken out of the control of Ayodhya. The Resident of Kashi Mr. Warbel was directed to confiscate all land and property of Chet Singh and allow him to remain as just a Zamindar. Chet Singh was cautious and was in dialogue with the Marathas.

With the sudden turn of events, England engaged in war with France. Warren Hastings demanded Rupees Five Lakhs from Chet Singh for three years. Chet Singh somehow paid the money in the first year, but when he failed to pay the amount in the subsequent year, Hastings levied a fine of Rupees one lakh on him. Chet Singh had to pay it. Hastings did not deposit the money in the treasury and continued to haggle Chet Singh. Apart from this, he also demanded one thousand horse-mounted soldiers. Chet Singh somehow provided five hundred. Annoyed, Hastings this time levied a fine of Rupees fifty lakhs. Chet Singh expressed his inability to pay it. The then Resident of Kashi Mr. Markhom accepted it. Hastings wrote to Chet Singh that an army unit under the command of Geham was being sent to Kashi after informing the council. If the fine was made good, they will be stopped if not, then Chet Singh will have to bear the expenses of the army unit too, in addition to the fine. Chet Singh somehow, with the help of his younger brother Sujan Singh, deposited Rupees one lakh, but Hastings was not pleased. He again demanded money in 1780. 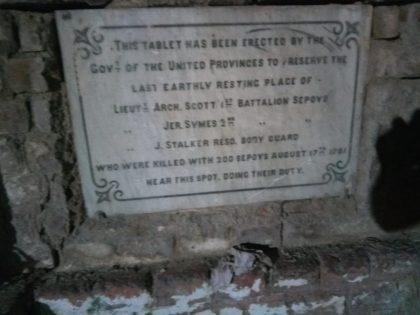 Graveyard at Varanasi of British soldiers killed in Battle of Shivala; Image clicked by author

On 15th August, 1781, Hastings came to Kashi and stayed in the famous “Madho Das ka bagicha’ (garden house of Madho Das), now situated just beside the district hospital (Shiv Prasad Gupt Hospital) and known as Radhaswamy Bag. The local people who then helped Hastings were Hunchback Moulvi, Gopal Das of Chunar, Pandit Beniram, Chet Ram, Kant Babu (of Kasim Bazar), Nandlal, to name a few. Immediately upon his arrival, Hastings ordered the Resident Mr. Markhom to arrest the king and secure the dues. He thought that the king would find it difficult to prepare for a battle at such a short notice. Markhom reached Chet Singh with the letter of Hastings. Chet Singh sent a reply in the evening, expressing his inability to pay.

The rumblings could have been sorted out amicably, but the local side-kicks of Hastings wanted things to escalate. On 17th August, 1781, Kashiraj Chet Singh had come to the palace situated on the bank of Ganges, now known as “Chet Singh Ghat” from his palace at Ramnagar, situated on the other side of the Ganges for doing some puja.

One representative of the Resident of Kashi, Chet Ram, who was a known miscreant of the city, was sent to that palace, as representative of Markhom to demand the money. Conceited and blinded with swagger, being the representative of “Company Bahadur” Chet Ram was abusive with the King. He said “I am Chet Ram. You are only Chet Singh. You should know that even a pyada (soldier) of the (East India) Company is as powerful as the Company itself. If anything is said to him, I’ll drag you to the Governor General by tying a rope in your waist” ….. so on and so forth. The verbal duel escalated. 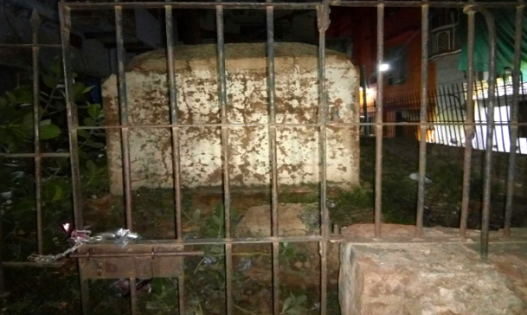 Graves in Varanasi of Lt. Arch Scott, Lt. Jar Symes and Lt. J. Stalker, who were killed in the Battle of Shivala

The insult of the king became untolerable for a patriotic soldier Nanhku Singh. With one strike of sword, he beheaded Chet Ram. Hunchback Moulvi was also killed. Maniyar Singh, the courtier of Chet Singh and Bhumihaar Sardar advised Chet Singh to arrest Warren Hastings, but Baxi Sadanand advised against it. It was a historical mistake.

Stunned by the news of Shivala, Hastings sent two companies of the Army under the command of Lt. Arch Scott and Lt. Symes to bring the king, chained. The bodyguard of the Resident of Kashi Lt. J. Stocker also accompanied them. Lt. Arch Scott wanted to forcibly enter the fort at Shivala, but was stopped by the bodyguards of Chet Singh. A verbal spat ensued and it spilled over into a full scale battle.

Now, the point to be seen here is that Chet Singh had arrived at Shivala fort only with a handful of soldiers, as this was not his usual residence. But when the residents of that mohalla (mostly were “Mallahs” – Boatmen) and other soldiers came to know that alien forces had arrived to capture their king, their patriotism aroused and they joined the battle of Shivala. Lieutenants Arch Scott, Symes and Stocker, along with two hundred (200) British Indian soldiers were killed on the spot. 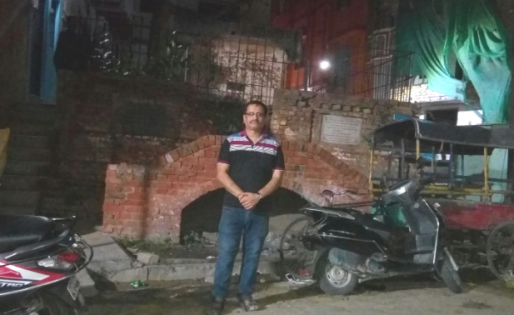 The author in front of the graveyard (of few British soldiers killed in battle of Shivala), located in a densely populated area.

The news of the battle of Shivala spread like wildfire in the whole city. The public attacked the Resident’s House (situated near the present IMA building). Fierce battle ensued and many British soldiers were killed. When the news reached Warren Hastings, with the help of Pandit Beniram and Bishwambhar Das, fled in a paalki, in the disguise of a Woman. There is a famous saying in Kashi about the hurried escape of Hastings:

I had the same feeling here, which I had standing in the “Kohima War Cemetery”. While British Soldiers who fought to keep our country in chains, are being sung and their heritage carefully preserved, the Indian soldiers, who fought and laid down their lives in the line of duty, are never known or sung.

Featured image (courtesy: scroll.in) is for representation purpose only for battle of Shivala.