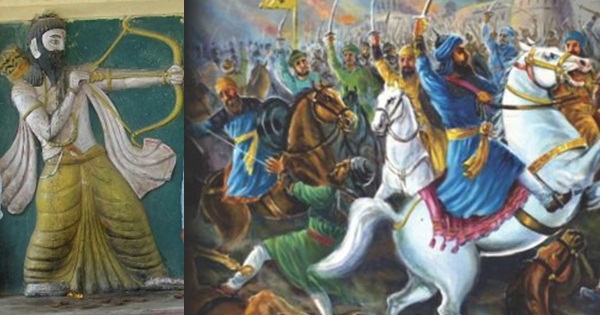 Sikhism was established as a Panth by Guru Nanak while it was transformed as a Militia under the guidance of Guru Govind Singh, the 10th Guru. The main motive of Sikhism was to fight against the .tyranny of Muslim rulers in our Country. The basic tenets of our Dharma like Vedas, Cow, Temples, Yajnopavit and Agnihotra were under threat.  When no other alternative was left, the struggle with arm was the only option. Hindus gifted their elder son to join the Khalsa Army for protection of our Motherland and Dharma. Whoever embraced the teaching of Gurus and became their disciple was considered as Sikh. There are vast stories of numerous sacrifices and inspiring tales full of bravery and valor in the Sikh History. One such tale is of Bhai Singha Purohit.

Bhai Singha Purohit was a Brahmin by birth and Kul-purohit of Guru Hargobind Singh’s family. So, he was very close to his family as well as a trusted lieutenant. Guru Hargobind Singh was the sixth Sikh Guru. Once Shah Jahan with his army invaded Amritsar. He wanted to crush the power of the Sikhs forever. Shah Jahan wanted the Guru to stop preaching his faith to the people.

A large army of Mughals set out for Amritsar under Mukhlis Khan’s command. Guru Hargobind instructed the Sikhs to leave Amritsar complex and confront Mukhlis Khan in the outskirts. He wanted to minimize casualties for the battle and not disrespect by starting battle within the complex of Amritsar. When Guru’s family reached Ramsar Sahib, they came to know that Bibi Viro, the daughter of Guru Hargobind Sahib was missing. She was just a child at that time. When the family was leaving the city, she was playing with toys. In such haste, no one could know that she did not sit on any carts, which were being used to take the family members out of the city. Meanwhile, the Mughal Army had entered the city. Bibi Viro was then all alone there in the complex.

It was a very difficult situation. Guru Hargobind Sahib thought that any reliable warrior should go there and bring Bibi to Ramsar Sahib safely. He needed a person, who was a fearless warrior, reliable, and above all, known to Bibi Viro. It was obvious that Bibi would not go with an unknown person. In such a critical time, Guru selected his ‘Purohit’ for this challenging job. Bhai Singha Purohit was a great warrior. He was a mighty commander of the Sikh Army. Above all, he was like a family member to Guru and Bibi Viro knew him very well.

Bhai Singha Purohit was accompanied by Bhai Babak Rababi. Both went to Amritsar in disguise of Mughal soldiers. Both the brave Sikhs reached in front of the Guru’s palace. He called Bibi Viro. The child opened the window and saw Bhai Singha. She came out of the palace and sat behind Bhai Singha on his horse.

Bhai Singha said to Bhai Baabak, “Let us go without any delay”. They prayed to the Almighty and left from there. A Mughal chief was on guard in the front of ‘Darshani Deodi’ (entrance door of Darbar Sahib) along with other soldiers. He had a spear in his hand. When Bhai Singha and Bhai Baabak reached near him, he said, “Who are you? Where are you going?”

Bhai Babak replied, “All are our brothers. Be careful. Everybody is looking for the Guru. Have you not seen the Guru yet?”

When Bhai Singha galloped away on his horse with Bibi Viro, the latter’s shoe fell down. Some small bells were attached to that shoe, which rang. This alerted the Mughal guard. He in turn alerted the other soldiers and the chief. Bhai Singha and Bhai Baabak galloped away fast on their horses. The Mughal army started chasing them. They shouted, “Enemies are running. They are carrying Guru’s family. Catch them, catch them”. Bhai Singha instructed Bhai Babak to shoot back at the following Mughal soldiers. The latter followed his instructions, killing Mughals, as they galloped fast. Both the warriors reached in front of Guru Hargobind Sahib and thus saved Bibi Viro.

The next morning five hundred warrior Sikhs were under the command of Bhai Singha Purohit. Riding on horseback, he and his army reached the battlefield. The enemy attacked with guns like a full flowing river. Mohammed Ali was leading the Mughal army then. Bhai Singha Purohit deployed his soldiers in a trench. When he saw the enemy shouting near the holy city, Bhai Singha said to his warriors, “Fire at once at these ‘Malechh’ people you are looking at. Kill all of them”. As soon as Bhai Singha ordered to fire, Sikhs started to fire their guns. Many Mughal soldiers were killed in great numbers instantly. With the guns now unloaded, it was time to use swords, the common weapon of those days. Bhai Singha advanced towards the enemy. Other Sikh warriors followed him. The limbs of the warriors were being cut into pieces.

Bhai Singha started to shot his arrows towards enemies. Wherever he shot his arrows that hissed like snakes, they would cross the bodies of enemies. He killed whoever came in his way. The fight by Bhai Singha created tumult (commotion and disturbance) in the enemy’s camp. The enemies could not face the bloodthirsty arrows of Bhai Singha Sahib. At last, the enemies had to run away.

Mohammed Ali, the Mughal army chief, gathered his army again and thus the Mughal army confronted the Sikhs again in the battlefield. Until now, Mohammed Ali had understood that it was Bhai Singha Purohit, who was creating trouble for Mughals. Hence he decided to confront him.

Bhai Singha was a target of many guns, but he continued to shoot his arrows and was killing the enemies continuously. This made Mohammad Ali very mad. Ali fired at Bhai Singha Purohit’s horse. Bhai Singha’s horse was shot and Singha fell down on the ground. The Purohit was now without his horse among the hundreds of enemy horsemen.  Hundreds of Mughal horsemen surrounded Bhai Singha, who was fighting all alone there. He was very alert; he continued to shoot his arrows towards enemies.

A single man was killing many Mughal soldiers. This made Mohammed Ali very angry. He ordered to fire at Bhai Singha from all the directions. It was not possible for Bhai Singha to save himself from bullets. Some bullets injured him. Even then, he continued to shoot. One of his arrows struck into Mohammed Ali’s forehead. The gun fell down from Ali’s hand. Now, Bhai Singha shot another arrow, which gave salvation to Mohammed Ali. Ali died there and his horse ran away.

Why I am writing this article is to give a remarkable message to all readers. We often see that few radicalized Sikhs are constantly attacking Hindus in the name of Gangu Brahmin. Gangu is considered as the person who betrayed Sikhs and he told Nawab of Sirhind the hiding place of Mata Gujri and young sahibzadeys. Few Sikhs often try to blame the Brahmin Community for the betrayal of Gangu. I want to ask the same Sikhs the following:

We cannot change our History, our pride, our heritage, our sacrifices. So, instead of forgetting it we must take inspiration from it.