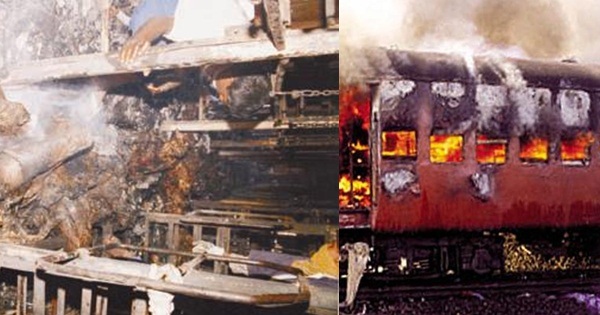 “Godhra”. The word is more than just the name of a town located in Panchmahal district in the western Indian state of Gujarat. The word used also indicates an event. A mind-numbing one.  A horrifying one. An unimaginable one. A barbaric one. The word “Godhra” records the gruesome killing of some 59 innocent people, including 25 women and 15 children and injuries to 40. Independent India saw many horrors. This was one of the worst of them.

Communal History of Godhra for the Record

Godhra is the main centre of Panchmahal district, which is considered to be communally very sensitive.Chronology of a few communal riots/atrocities, as reported by Vishwa Samvad Kendra, Gujarat is appended below:

1928: Murder of P.M.Shah, a leading local representative of Hindus.

1946: Mr. Sadva Hazi and Mr.Chudighar,pro-Pakistani Muslim leaders were responsible for attack on a Parsi Solapuri Fozdar during communal riots. After partition, Mr. Chudighar left for Pakistan.

1948: Mr. Sadva Hazi conspired an attack on the District Collector, Mr. Pimputkar in 1948 but his bodyguard saved him at the cost of his own life. After that, Mr. Sadva Hazi also left for Pakistan in 1948.

On 24th March, 1948, one Hindu was stabbed to death near a mosque in Jahurpur area. Around 2,000 houses of Hindus were burnt, besides Hindu temples. District Collector Pimputkar could save the remaining areas belonging to Hindus by imposing curfew, which lasted for six months.

1965: Shops belonging to the Hindus were set ablaze near police chowki No.7 by throwing incendiary material from the nearby two Muslim houses, viz. Bidani and Bhopa. It could be possible allegedly because of the Congress MLA belonging to the minority community. PSI of this police chowki, which was near the Railway Station, was also attacked by anti-social elements.

1980: A similar attack was made on the Hindus on 29th October, 1980, which started from the Bus Station of Godhra. This attack was planned by Muslim miscreants who were involved in anti-social activities near the Station Road area.

Five Hindus including two children of five and seven years of age were burnt alive. A Gurudwara was also set on fire, in Shikari Chal of this area. Forty shops belonging to the Hindus were also set on fire in station area. Due to these communal riots, Godhra was put under curfew for a year, which severely affected the business and industries.

1990: Four Hindu teachers, including two women teachers, were murdered (cut into pieces) by miscreants in Saifia Madarsa in Vhorvada area of Godhra on 20th November, 1990 in front of children. One Hindu tailor was also stabbed to death in this area. All this was done by anti-social elements allegedly at the instance of the Congress MLA of the area.

1992: More than 100 houses belonging to the Hindus were set on fire near the Railway Station in the year 1992 to snatch away this area from Hindus. This area in 2002 was lying vacant as most of the Hindu families had shifted elsewhere.

2002: The bogies of Ahmedabad-bound Sabarmati Express were set on fire on 27th February, 2002 by Muslim miscreants. S-6 coach carrying karsewaks returning from Ayodhya was targeted as a pre-meditated plan/ conspiracy. 59 innocent men, women and children died and 40 sustained injuries. The attackers had a plan to set on fire the entire train but could not do so because the train was late for four hours and they could not take the advantage of darkness of night.

Wednesday, March 13, 2002 (Godhra): Within a fortnight of the February 27 railway station mayhem and subsequent violent fallout, tension escalated again today with a minority mob allegedly attacking people in the town, leading to police firing. Police said a ‘500-people strong mob of minority community’ attacked people in the Jahurpura area near the Old Bus Stand. They resorted to stone pelting and also ‘opened fire’ with private arms, police said. Police opened fire and hurled tear gas shells to disperse the mob. There was no report of any injury or casualty so far.

Additional forces of police, State Reserve Police and anti-riot Rapid Action Force (RAF) personnel led by senior DSP, Raju Bhargava, rushed to the spot and carried out a combing operation. ‘Twelve persons including two women were picked up from a nearby place of worship,’ police said. The situation was under control but tense, police said”.

Thus Muslims attacked Hindus in Godhra again soon after the 27th February carnage. The Times of India also reported this PTI news, and it can be read today here.

2003 September: Ganesh idol immersion saw stone pelting and conflicts between Hindus and Muslims. This was reported by rediff.com and the Times of India, but was forgotten by everyone, including the Sangh Parivar leadership.

All the above details of Godhra (except the 2003 stone pelting and mob attack of March 2002) are also mentioned in an article titled “Godhra in Ferment even before Independence” in the Milli Gazette magazine on 16 March, 2002.

This magazine is considered as a voice of Muslims in India. This is the Indian Muslims’ leading English newspaper and it has also published these details about Godhra. 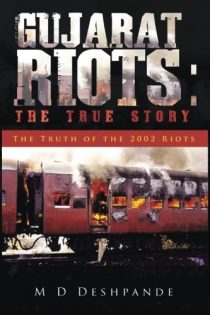