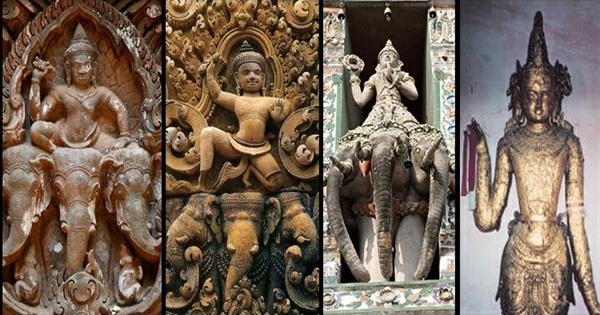 In Vedic age, Indra was the king of the gods and ruler of the heavens. He was the god of rain and thunder and a great warrior, a symbol of courage and strength. He was the defender of gods and mankind against the forces of evil, and since he was the one who brought water to earth, he was also deemed a fertility god. 25% hymns in the Rig Ved are dedicated to him.

Indra held court in the clouds surrounding the highest peak of the sacred mount Meru. He rode on the great white elephant Airavat when not in his chariot. Vajra was his most popular weapon. He was known by numerous names Surendra (chief of deities), Devaraja (king of deities), Devendra (the lord of deities), Sakra (Powerful), Vajrapani (the Thunderer), Meghavahana (Rider of the Clouds), Svargapati (the Lord of Heaven), etc.

In the Mahabharat, Arjun was the son of Indra. Rama, the hero of Ramayan, was referred to as Raghavendra (Indra of the clan of Raghu). Although in later Puranic age, he lost importance to trinity of gods (Vishnu, Shiva and Brahma) yet he continued to hold sway as the prototype for all human lords. Variations of his name served as a suffix (e.g. Raghavendra, Jitendra, Rajendra) for mostly Kshatriyas and rulers.

Indra finds importance in other Indian schools of religion. According to Jainism, it was Indra who awarded Mahavira with a golden robe during his earthly life. Buddhists also acknowledge the Lord as the original leader of the Devas. In the Guru Granth Sahib of Sikhism, he is mentioned with other Hindu deities; many Sikh names suffixing ‘Inder’, represents the strength and virility in battle that the Lord embodies, used by both males and females.

In pre-historic times, Indian Kshatriya adventurers took Indra cult to far flung places. The Lord finds mention and is worshiped across many cultures and civilizations in Southeast Asia. Indra is known as Daeva in Iran, Thagyamin in Burma, and Phra In in Thailand. In Khmer, he is known as Preah, in Malay as Indera, in Chinese as Dishitian, and in Japanese as Taishakuten.

Ancient Vedic community Bishnupriya Manipuri dedicated their rain invoking song boron dahanir ela (hymn invoking rains to pour) to Lord Indra. He was known as Soraren or Sorarel; a corrupt form of Surendra, another name of the Vedic Lord. This ancient folk song of this community composed in B. Manipuri language, continues to be sung to this day; it testifies the antiquity of this language.

Somnath Singha has keen interest on Indian History. He is continuously involved in historical studies and research. One of his goals is to trace the origin of the Bishnupriya Manipuri race and migration of Aryans beyond South Asia.

Secrets Behind This Cleanest Village in India and Asia