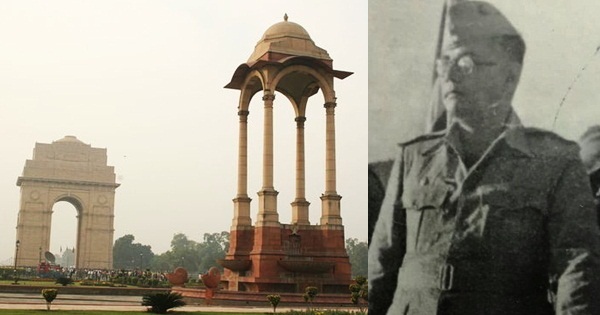 Very near to the India Gate in the heart of Delhi stands an empty sandstone canopy that once had the statue of King George V. It is also known as India Gate Canopy and King George V canopy. As the everlasting flame flickers in the India Gate premise in remembrance of martyrs, specially of World War II, this vacant monument stands as a silent spectator without life.

King George V canopy was built in the memory of George V, King of England by the British. It was constructed in 1911 when they announced the shifting of their capital  from Calcutta to New Delhi. It housed a statue of the king of England. After India declared independence on August 15, 1947, Indians pulled down this statue. Since then it has been left empty.

Why is the King George V canopy left vacant? Do we still want to remember that it once housed the statue of the king of England? Lakhs of freedom fighters sacrificed their lives for the freedom we enjoy today? Shouldn’t the statue of a freedom fighter, who made India free, adorn this canopy where lakhs of people witness it everyday? This vacant space is the right place for Netaji Bose.

Maj Gen GD Bakshi demands that the vacant King George V canopy should house the statue of Netaji Bose. He said in a Facebook post: “The Netaji campaign was a great success. Its highlight was when the PM himself unfurled the national flag for the second time from the ramparts of the Red Fort on the occasion of the 75th anniversary of the establishment of the Azad Hind Govt in exile. 99 Years old Naik Lalti Ram of INA was there with him on the dias. Next we were able to get four INA veterans on Republic Day parade. It has made a tremendous statement.
This must not stop. These must be annual features now and done every 21st Oct and 26 Jan. These have to be institutionalised.”

“There is one major Pending Issue. The King George V canopy near India Gate is still lyingvacant. Can we request the Modi Govt to kindly install the statue of Netaji Subhash Chandra Bose there and get the INA a permanent place on Rajpath?”

Why should Netaji Bose’s statue adorn the canopy near India Gate? Netaji Bose was not only a Military Leader but also the First Supreme Commander of modern India. He was instrumental in India getting her freedom. Netaji Bose and his Azad Hind Fauz (INA) was the primary catalyst that inspired the military revolts that ultimately forced the British to quit. The truth about Netaji Bose and the sacrifices he made for India have been wiped out from History.

In 1940, at the age of 43, Netaji Bose escaped from India. Why? To seek help from Indians settled and working overseas to drive the British out of India. To arrange an army with the help of Japan and other countries to attack the British forces in the Indian soil and free India. He was confident about it. And he succeeded! Netaji Bose established the Provisional Government of Free India, i.e. Azad Hind Govt. in Singapore on 21 October 1943. Its army was the Azad Hind Fauj. He allied with the Axis powers and his cause was funded by Imperial Japan monetarily, militarily and politically. It was recognized by 11 countries including Russia.

Such was Netaji Bose’s determination, dedication, and commitment to free Mother India from the hands of the British Raj that he managed to raise a huge army of 60,000 soldiers in a foreign land! He underwent big hardships to create his army. Many Indians donated huge amount of money for the formation of the Azad Hind Fauz and themselves became part of the army. The son of an INA veteran says,  “My father joined Netaji Bose’s INA from Singapore. He donated a huge amount for forming of INA. Due to this, after freedom, our family was under severe poverty, and my father could not send me to school. I was brought up illiterate. I have seen some of my father’s friends who were INA soldiers. They all perished in poverty and their families have vanished.” This is very unfortunate. After India gained freedom, the Nehru government should have recognized the INA soldiers role in India’s freedom movement. Hope the current government gives the surviving INA veterans their due rights.

In the words of Bhuvan Lall, author of a book on Netaji titled The Man India Missed the Most, “Netaji Bose embarked on death defying journeys for India’s freedom across the treacherous mountains of Afghanistan, threatening waves of Atlantic and Indian Oceans, tortuous jungles of Burma – pursued by assassins and the spectre of death. Faced with impossible odds, he was determined to triumph over an undefined future with courage, dignity and honor. He became the stuff of legends in his own lifetime.”

A succession of court historians have tried to craft a narrative that India had obtained her freedom entirely by the soft power of ahimsa (non-violence) and Satyagraha; and that hard power had no role to play whatsoever. This is a huge sacrilege. As per the INA’s official history, the force had a total strength of 60,000. Of these, 26,000 were killed in action. Was that non-violence?

In the words of Maj Gen GD Bakshi, “The pity is that the Nehruvian dispensation treated these men as traitors. There is no memorial for the 26,000 martyrs. The INA veterans were not taken back into the Army (on Mountbatten’s advice) and denied their war time pensions. Any nation that seeks to gloss over the martyrdom of 26,000 of its soldiers erodes the very basis of its nationhood.”

“The problem arose from the Nehruvian dispensation’s quest for political legitimacy. It claimed that its non-violent struggle alone had liberated India from the colonial yoke and as such, that gave it the right to rule. This was a deliberate distortion of History to downplay the role of violence and completely bury the role of Netaji Bose and the INA. In denying this obvious legacy of force and violence, the Nehruvian dispensation went to inordinate lengths to underline the relevance of its ideology of pacifism and non-violence.”

When the INA memorial was set up in Singapore, Nehru was to visit it, but he didn’t. In the words of Maj Gen GD Bakshi, “Nehru was to visit this but Mountbatten told him not to and he meekly complied. Mountbatten then ordered the memorial blown up. It remained that way for 50 years. The Indian Govt did absolutely NOTHING. It was the Govt and people of Singapore who rebuilt that memorial in 1995.”

Maj Gen GD Bakshi has raised these questions pertaining to Netaji Bose and the INA right, “What is the problem with our govt? Are we still full of stooges of the British Raj? Why can’t we dare to own up Netaji Bose as our true liberator? Why is the present govt still energetically protecting the Nehruvian thesis? Why has the present Parliament not accepted the justice Mukherjee commission report? Why are the people of Bengal and India so dead???”

Let the canopy near India gate no longer remain as King George V canopy. Let the statue of Netaji Bose be installed and the canopy renamed as Netaji Bose canopy. Jai Hind!

Featured image courtesy (left): Atlas Obscura. Image of Netaji is the author’s personal collection sourced from Lt Asha Sahay, Azad Hind Fauz Veteran. This image of Netaji Bose, available with the author, is copyright free. Anyone can copy it. A pic of Netaji posted earlier (if it appears elsewhere in the Internet) was sourced from DNA India (same image also available in hindi.webdunia.com and 40 plus more leading news platforms).