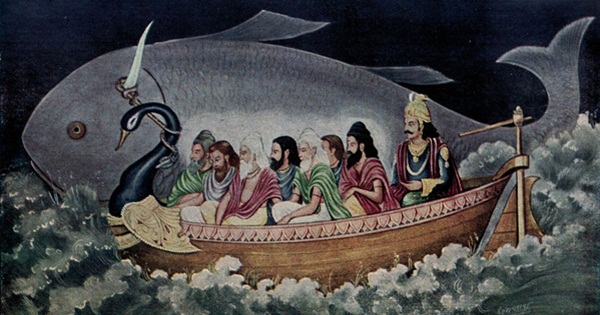 In the year 1872, an amateur Assyriologist made a path breaking discovery which would be an act of revelation for the world. He Achieved overnight reputation and fame by his translation of the Chaldean account of the great flood which he presented before the Society of Biblical Archaeology, whose audience included the then Prime Minister of United Kingdom, William Ewart Gladstone.

The work is better known as the eleventh tablet of the epic of Gilgamesh, one of the oldest known work of Literature. Smith being successful in deciphering the text realized that the tablet tells a tale of an ancient Mesopotamian legend that runs collateral to the story of Noah’s Ark from the book of Genesis in the Old Testament.  In 1873, Smith left for Nineveh for the second expedition and continued his expeditions in Nineveh itself.  An account of his work is published in the year 1875 under the name Assyrian Discoveries.

Today, in the age of discovery and revelations, we know that flood myths are not only confined to the near eastern civilizations, but there are references of such flood myths also in many ancient civilizations throughout the world. Accounts of a  great deluge are found in the Ancient Sumerian tablets (The Eridu Genesis), Calio inn Greek mythology, the lore of the K’iche’ and Maya peoples in Mesoamerica, the Gun-Yu myth of China, the stories of the Lac Courte Oreilles Ojibwa tribe of North America, and the stories of the Muisca people are the few examples.  In the same context, there is an old and interesting account in ancient Hindu texts that bear a striking familiarity to the Story of Noah and his Ark.

The Hindu Flood account of Manu can be traced back to different sources. The earliest account is said is said to be written down in the Vedic Satapatha Brahmana, whilst other accounts can be traced to the Puranas, including the Bhagavata Purana, Matsya Purana and even the Mahabharata.  Notwithstanding, all these accounts agree that the main character of the flood story is a man named Manu Vaivasvata. Like Noah, Manu is described as a virtuous individual. The Satapatha Brahmana, for instance, has this to say about Manu: “There lived in ancient time a holy man called Manu, who, by penances and prayers, had won the favour of the lord of heaven.”

Manu was said to have three sons before the flood – Charma, Sharma, and Yapeti, while Noah also had three sons – Ham, Shem, and Japheth.

In the Book of Genesis, the cause of mankind’s destruction is told as, “And God saw that the wickedness of man was great in the earth, and that every imagination of the thoughts of his heart was only evil continually. And it repented the Lord that he had made man on the earth, and it grieved him at his heart. And the Lord said, I will destroy man whom I have created from the face of the earth; both man, and beast, and the creeping thing, and the fowls of the air; for it repenteth me that I have made them.”

In Manu’s story, the destruction of the world is treated as part of natural order and not as a divine punishment.  According to the Matsya Purana – Manu then went to the foothills of Mount Malaya and started to perform tapasya (meditation). Thousands and thousands of years passed. Such were the powers of Manu’s meditation that Brahma appeared before him. “I am pleased with your prayers,” said Brahma. “Ask for a boon [favor].” “I have only one boon to ask for,” replied Manu. “Sooner or later there will be destruction (pralaya) and the world will no longer exist. Please grant me the boon that it will be I who will save the world and its begins at the time of the destruction.” Brahma readily granted this boon.

In the Old Testament, God saves Noah by instructing him to build an Ark. Similarly, in the Hindu version of the story, it is also through divine intervention, in the form of god Vishnu, that mankind is preserved from total destruction. In this story, the God appears to Manu in the form of a little fish whilst he was performing his ablutions in a pond. Manu kept the fish, which grew so quickly that its body occupied the entire ocean in a matter of days. It was then that Vishnu revealed his identity to Manu, told him about the impending destruction, and the way to save humanity. There is also a large boat involved in this story too. Vishnu instructed Manu to build a boat and fill it with animals and seeds to repopulate the earth:

“O kind-hearted man, you have care in your heart, listen now. Soon the world will be submerged by a great flood, and everything will perish. You must build strong ark, and take along rope on board. You must also take with you the Seven Sages, who have existed since the beginning of time, and seeds of all things and pair of each animal, when you are ready, I will come to you as Fish and I will have horns on my head. Do not forget my words, without me you cannot escape from the flood.”

When the time came, Manu was to tie the boat to the horn of fish, so that it could be dragged around. Interestingly, this would not be the only time that Vishnu saves mankind from destruction, as he would re-appear as avatars over the course of time to preserve life on earth.

After the event of the flood, Noah’s Ark is said to have rested on the mountains of Ararat. In case of Manu’s Legend, THE boat was described being positioned at the top of the range of mountains (The Malaya Mountains in this case) till the waters had subsided.  Both Noah and Manu were then said to repopulate the earth, and all human beings could trace their ancestry to either one of these flood survivors.