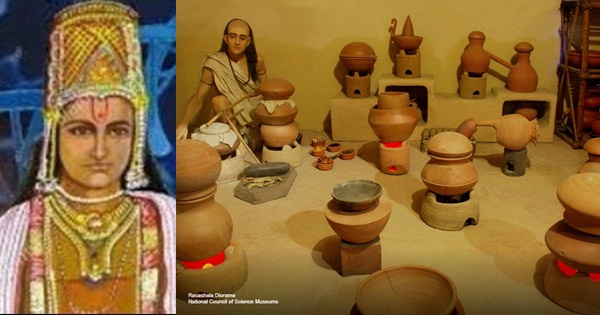 Ancient and medieval India had a legacy of being home to a great number of prominent scientists. In the field of Alchemy, which in today’s terms called ‘the medieval forerunner of chemistry’, ancient Indians achieved great progress. There have been continuous experiments on the transmutation of matter. Creating a universal elixir that would increase lifespan, converting base metals to another substance, especially gold (or like gold), distillation, and related processes were part of the experiments. Archaeological excavations in Taxila (part of ancient India then) led to discovery of artefacts pertaining to distillation of alcohol – the earliest distillation of alcohol as claimed by Joseph Needham, a British biochemist, historian and sinologist. To quote Dominik Wujastyk from his book An Alchemical Ghost: The Rasaratnâkara by Nâgârjuna, “There are at least seventy or eighty primary Sanskrit works on Alchemy. Approximately one fifth of these have been printed, few critically edited, and none completely translated.”

Nagarjuna is a name synonymous to Alchemy, Chemistry and Metallurgy. He is also a well known name in Ayurveda. He conducted a number of alchemic and metallurgical experiments directed towards transforming base elements into gold. His book Rasaratnakara is one of the earliest documented texts in Sanskrit on Alchemy and related subjects. At a time when the Western scientists conducted subsequent experiments in Alchemy and failed, in India, alchemy saw a prominence in similar experiments by Nagarjuna. He discovered through his experiments in his laboratory the alchemy of transmuting base metals into gold. It was not the actual gold, but a gold-like substance or element that looked like gold and shone like gold. This gold-shine mechanism technology is used today by the jewelry industry for making imitation jewelry. The gold shine in imitation jewelry we wear today is a gift by Nagarjuna.

10th-11th century Iranian historian Al Beruni describes in his book on India about this art of alchemy and cites Nagarjuna as a ‘famous representative of this art’. Eduard Sachau in his book Alberuni’s India quotes thus about the art, “They have science similar to alchemy which is quite peculiar to them. They call it Rasayana, a word composed with rasa, i.e. gold. It means an art which is restricted to certain operations, drugs, and compound medicines, most of which are taken from plants.”

Extract from the book ‘Alberuni’s India’ by Eduard Sachau describing the art of Indian Alchemy. Another screenshot on Nagarjuna described as a Wizard of this art, follows a few paragraphs below

Nagarjuna’s treatise Rasaratnakara describes methods for the extraction of metals like gold, silver, tin and copper.  He also wrote Rasahrdaya and Rasandramangala. In Ayurveda, intake of swarna bhasma (gold powder) as a therapeutic agent is suggested for treating several ailments. This swarna bhasma is not the direct powder of the physical gold but a substance obtained after being subjected to chemical process such as heating to high temperatures in air or oxygen (termed calcination) of metal (gold) and subsequent mixing with herbs. Ancient Indian Ayurveda treatises describe in detail about it. Experiments by ancient Indian scientists, alchemists, and Ayurveda experts have led to the development of swarna bhashma.

The antiquity of metals and metallurgy dates back to thousands of years. Ancient Indian scriptures find mention and description of metals. The Rig Veda finds mention of ayas, which means metal. The Yajur Veda, Sathapatha Brahmana, and many other ancient Indian texts find mention of metal. Chanakya’s Arthashastra describes roles allotted to people who managed metal work, especially metals and mines. According to the book Chronology of Ancient India by Vedveer Arya, the Vedic age flourished around 14000 BCE. According to the same book, Maurya dynasty flourished in 16th century BCE, which means Chanakya lived around 3600 years ago. In ancient India, crucible steel was produced in Kodumanal in Tamil Nadu, Golconda in Telangana, Karnataka exported globally. Tamils of the Chera Dynasty produced the finest steel in the world called the wootz steel. It was exported as cakes of steely iron. There are several archaeological evidences on ancient Indian metallurgy. Excavations in Middle Ganges Valley led to discovery of iron workshops dating back to 1800 BCE. Excavations at different sites in Uttar Pradesh revealed ancient Indians used iron implements around 1800 BCE to 1200 BCE. Many more excavations at different sites further corroborate use of metals in ancient India.

When was Nagarjuna born and where? The founder of the Madhyamaka school of Mahayana sect of Buddhism was also Nagarjuna; hence confusion often prevails when identifying the two great personalities of India. According to Eduard Sachau’s Alberuni’s India, as quoted by Al Beruni, metallurgist Nagarjuna was born around 100 years before his time. Al Beruni was born in 973 CE and lived up to the mid 11th century. Going by this record Nagarjuna was born in the 9th century CE. But Al Beruni did not cite any references to prove his point. According to the same records, the wizard was born in Daihak near Somnath in Gujarat.  According to Tibetan and Chinese literary sources, Nagarjuna was born in Vidharbha in Maharashtra and later migrated to the Deccan region where the Satavahanas were then the rulers. The Satavahana dynasty flourished in a much earlier period preceding the start of BCE. Going by the Tibetan sources, metallurgist Nagarjuna probably lived much earlier. Besides, literature on medicine and alchemy finds authorship of one or two more authors by the name of Nagarjuna. But they are different from Nagarjuna, the founder of Madhyamaka school of Mahayana Buddhism, who lived from 1090-1020 BCE according to the book Chronology of Ancient India by Vedveer Arya though he also wrote several treatises on rasayana. More works ascribed to Nagarjuna are Yogaratnamālā, Jīvasūtra, Yogaśataka, Rasavaiśeṣikasūtra, and Kakṣapuṭa.

Eduard Sachau’s Alberuni’s India describes Nagarjuna thus: ‘A famous representative of this art was Nagarjuna, a native of the fort Daihak near Sumnath. He excelled in it, and composed a book which contains the substance of the whole literature on this subject, and his very rare. He lived nearly a hundred years before our time.” An Iranian historian, scholar, and an alchemist himself full of praises for the Indian metallurgist Nagarjuna proves how endowed he was. The book Nagarjuna wrote on his alchemic/metallurgical studies and experiments ‘which contains substance of the whole literature on this subject’ and termed ‘very rare’ by Al Beruni is Rasaratnakara.

While the date of birth is a matter of debate, the works and contribution described of Nagarjuna in Tibetan sources is same. Hindu Culture and Lifestyle by Vaishali Shah mentions the Alchemy wizard to be born in early second century BCE. According to this book, Nagarjuna learned alchemy from a Brahmin.

Major Contributions of Nagarjuna in Alchemy (Chemistry), Metallurgy, and Ayurveda

1. His books deal with the preparation of mercury (rasa) compounds.

2. He described extraction of metals such as gold, silver, copper, tin from their ores and their purification.

3. Described design of chemical lab including instruments to be used in the lab, shape and size of instruments and their uses.

5. Described preparation of the elixir of life – of creating medicines for increasing lifespan.

6. Described corrosion and loss on heating.

7. Wrote on metals and their stability.

8. Described preparation of yellow metal which shines like gold, but not gold.

Nagarjuna had a standard laboratory of his own where he conducted experiments. There are evidences of his experimental laboratory in Nagalwadi village of Maharashtra. Nagalwadi is located in Saoner Taluka in the district of Nagpur. Probably Nagarjuna migrated from Gujarat to Maharashtra and settled here.  Considered the most prominent scholar in Indian Alchemy, Nagarjuna is featured in the National Science Centre (Delhi) in the ‘Our Science & Technological Heritage of India’ gallery. His typical alchemical laboratory called the Rasashala is recreated in this gallery.

Besides the various experiments, Nagarjuna also experimented in various dimensions in the field of metallurgy and alchemy. He contributed a lot towards developing curative medicines for various ailments.

2. The Early Use of Iron in India by Dilip K. Chakrabarti

4. ‘The origins of iron-working in India: new evidence from the Central Ganga Plain and the Eastern Vindhyas’ by Rakesh Tewari

5. A History of Indian Medical Literature by Gerrit Jan Meulenbeld