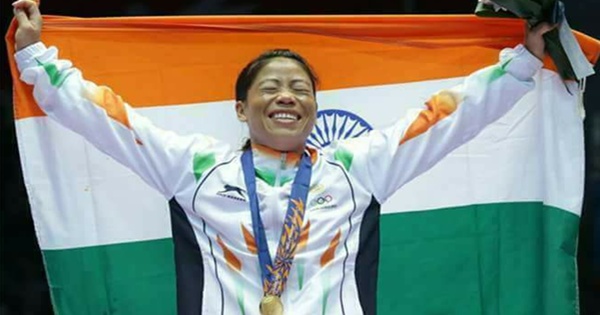 It is time to rejoice for India! Five-time world champion and Olympic bronze-medalist Mary Kom wins her 5th Asian Boxing Championship gold medal. She played in the 48kg category, defeating Korea’s Kim Hyang Mi. The championship took place at Ho Chi Minh City in Vietnam. She won in a unanimous 5-0 verdict. In the semifinals, she defeated Japan’s Tsubasa Komura, also in a unanimous 5-0 verdict.

In total, India won a gold, a silver and five bronze medals at the tournament.

35 year old Mary Kom has been away from the boxing ring for a long period. After a five year gap, she resumed her passion, returning to her favorite 48-49 kg category and emerged victorious!  After the 2014 Asian Games, it was her first international gold medal.

Chungneijang Mary Kom Hmangte, who hails from the Kom tribe in Manipur, started training in the art of boxing at the age of 15. She drew inspiration of pursuing boxing as a sport from Dingko Singh, a Manipuri, who won a gold medal in the 1998 Bangkok Asian games. She has been nicknamed ‘Magnificent Mary’.

2. 1st Indian woman boxer to get a Gold Medal in the Asian Games in 2014 in Incheon, South Korea.

3. Only woman boxer to have won a medal in each one of the six world championships

4. Only Indian woman boxer to have qualified for the 2012 Summer Olympics

6. Nominated as a member of the Rajya Sabha on 26 April 2016 by the President of India

7. Appointed as national observer for boxing in March 2017 by the Ministry of Youth Affairs and Sports, Government of India.

Mary Kom had expressed her desire that she would return to India with a gold ahead of the championship. She dedicates her victory to all of her supporters and her coaching staff.