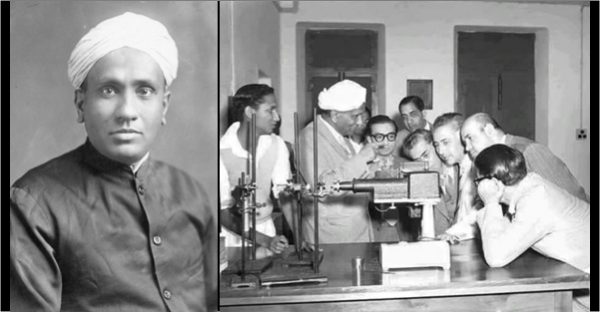 A glass of water has no colour. But a deep sea with the same water is a brilliant blue. Why is this so?

This was the question that CV Raman asked himself in 1921 on seeing the colour of the Mediterranean sea from a ship. He immediately began to conduct experiments on board the ship using some simple instruments he had with him. At that time, scientists believed the sea was blue because it reflected the colour of the sky, but Raman found that it was the water itself that caused blue light to scatter more than other colours in light.

At that time Raman was a professor at the University of Calcutta. He returned from his visit of England and Europe and started experiments to study how light behaved when it passed through various substances. On February 28, 1928, one of the experiments gave a clear result. Light of only one colour was passed through a liquid, but the light that emerged had small traces of another colour. This meant that the molecules in the liquid were changing the colour of some of the light passing through it. The discovery created a sensation around the world and was named the Raman Effect.

In 1930, CV Raman became the first person from Asia to be awarded a Nobel prize in any field of science. The date of the discovery, February 28, is now celebrated as National Science Day in India.

The Raman Effect has been very useful in many areas of science. It was found that when light was passed through a substance, a series of colours were seen that could be thought of as a fingerprint of the substance. This idea has been used in chemistry, medicine, biology and many other areas of science to find out what a substance is made of. It is Raman Spectroscopy.  Recently, people have used the idea to make a device called a Raman Scanner. It can be pointed at a substance to tell what it is. Police have begun to use this scanner to find out if people are carrying any banned substances.

Simply Brilliant
Raman was a man of extraordinary ability. He passed his Std. X when he was just 11 years old. At 15 he had a degree, with gold medals in Physics and English. By the time he was 19 he had an MA. Professors at college used to allow him to skip science classes because they knew he didn’t need them. In addition to being brilliant, Raman was also intensely curious about the world around him. We saw how his curiosity about the colour of the sea led to the discovery of the Raman Effect.

Similarly, his curiosity led to a wide range of scientific work. On his 1921 trip to England he was taken to see St. Paul’s Cathedral. Raman became so excited by the whispering gallery there that he performed some experiments and wrote scientific papers about it. As a child, Raman had seen his father play the violin. Much of his life’s research work was about the science behind music. He also investigated the effect of sound on light and the structure of crystals. His collection of crystals is preserved at the Raman Research Institute in Bangalore. This article is modified from one that first appeared in The Hindu newspaper.

Chandrasekhara Venkata Raman was born at Tiruchirappalli in Southern India on November 7th, 1888. His father was a lecturer in mathematics and physics so that from the first he was immersed in an academic atmosphere. He entered Presidency College, Madras, in 1902, and in 1904 passed his B.A. examination, winning the first place and the gold medal in physics; in 1907 he gained his M.A. degree, obtaining the highest distinctions.

His earliest research was in optics and acoustics – the two fields of investigation to which he has dedicated his entire career – were carried out while he was a student.

Since at that time a scientific career did not appear to present the best possibilities, CV Raman joined the Indian Finance Department in 1907; though the duties of his office took most of his time, Raman found opportunities for carrying on experimental research in the laboratory of the Indian Association for the Cultivation of Science at Calcutta (of which he became Honorary Secretary in 1919).

In 1917 he was offered the newly endowed Palit Chair of Physics at Calcutta University, and decided to accept it. After 15 years at Calcutta he became Professor at the Indian Institute of Science at Bangalore (1933-1948), and since 1948 he is Director of the Raman Institute of Research at Bangalore, established and endowed by himself.

He also founded the Indian Journal of Physics in 1926, of which he is the Editor. Raman sponsored the establishment of the Indian Academy of Sciences and has served as President since its inception. He also initiated the Proceedings of that academy, in which much of his work has been published, and is President of the Current Science Association, Bangalore, which publishes Current Science (India).

Some of Raman’s early memoirs appeared as Bulletins of the Indian Association for the Cultivation of Science (Bull. 6 and 11, dealing with the “Maintenance of Vibrations”; Bull. 15, 1918, dealing with the theory of the musical instruments of the violin family). He contributed an article on the theory of musical instruments to the 8th Volume of the Handbuch der Physik, 1928. In 1922 he published his work on the “Molecular Diffraction of Light”, the first of a series of investigations with his collaborators which ultimately led to his discovery, on the 28th of February, 1928, of the radiation effect which bears his name, the Raman effect (“A new radiation”, Indian J. Phys., 2 (1928) 387), and which gained him the 1930 Nobel Prize in Physics.

Other investigations carried out by CV Raman were: his experimental and theoretical studies on the diffraction of light by acoustic waves of ultrasonic and hypersonic frequencies (published 1934-1942), and those on the effects produced by X-rays on infrared vibrations in crystals exposed to ordinary light. In 1948 Raman, through studying the spectroscopic behaviour of crystals, approached in a new manner fundamental problems of crystal dynamics. His laboratory has been dealing with the structure and properties of diamond, the structure and optical behaviour of numerous iridescent substances (labradorite, pearly felspar, agate, opal, and pearls).

Among his other interests have been the optics of colloids, electrical and magnetic anisotropy, and the physiology of human vision.

Raman has been honoured with a large number of honorary doctorates and memberships of scientific societies. He was elected a Fellow of the Royal Society early in his career (1924), and was knighted in 1929.

From Nobel Lectures, Physics 1922-1941, Elsevier Publishing Company, Amsterdam, 1965. This autobiography/biography was written at the time of the award and first published in the book series Les Prix Nobel. It was later edited and republished in Nobel Lectures.

This article was first published at prasherworld.com.

Deepak Prasher is an Emeritus Professor of Audiology at University College London. He divides his time between London and Trivandrum. He loves traveling, Photography and Indian Philosophy.

Tadar Anang: Teen Scientist from Arunachal Pradesh who Developed Goggles for the Blind