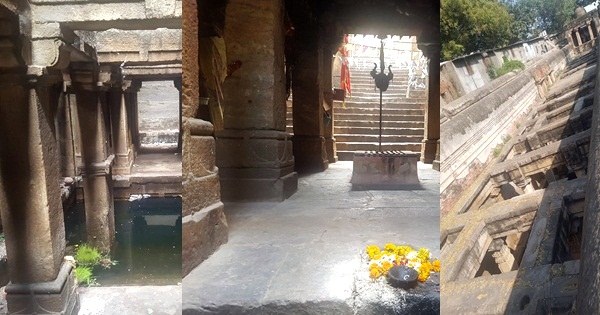 The Sevasi Vidyadhar Vav, situated in Sevasi  on the outskirts of Vadodara in Gujarat is a jewel in our midst but it is probably just a matter of a few years before it gives in, succumbing to decades of government neglect, losing the battle against the ravages of time, and completely withering away.

Carved completely out of stone, the vavs (step wells) of Gujarat are unique marvels of architecture. In their prime they provided respite, shade and cool water to travellers. The walls of these wells are adorned with captivating sculptures from holy epics.  The science and aesthetic behind these high utility structures has always been awe inspiring.

The Sevasi Vidyadhar Vav is probably one of the least known and most neglected vavs. It exists unassumingly on a humble side lane of the Sevasi-Sindhruot Road and travellers would definitely miss it unless someone told them about it.

On our first visit there, we were stumped by the geometrical precision of the walls, the steps and the pillars. As is always the case with such monuments, we were left wondering how the architects and sculptors completed this detailed work with the limited means available then.

We took lots of pictures but there was no information about it anywhere. We left feeling terrible about the extent of neglect that it was under. The well which used to be full of drinking water today is full of soil and dirt. The pillars which lasted centuries may give way in a few years. The only respite was that it was clean. Also, at one level there was a small hawan kund which was lit probably by the locals.

We visited the Sevasi Vidyadhar Vav a few days later again. This time we met a man named Dinesh Patel who was cleaning the steps. We got talking and he told us that the vav was made by Raja Haridas in memory of the revered spiritual leader Shri Vidyadhar in the year 1543. Intrigued we asked him how he knew all this and he pointed us to the inscription on the walls right above our heads. He translated them to Hindi and Gujarati as we felt insufficient and ignorant in his presence.

Then he pointed us to the few surviving sculptures, ‘This one’, he said pointing to one which we had photographed but not understood last time, ‘is the shivling with eight naag around it’. Look here,’ he continued pointing to the other way, ‘ this is Krishna’s Sudarshan Chakra. This one is a Ganpati ka prateek,’ we watched rapt as everything around us, one by one got meaning and came almost alive.

We asked him how he is associated with the Sevasi Vidyadhar Vav and he replied, ‘I am just a local here and have been visiting the vav since childhood with my grandmother who lived till the age of 107. Hence, I am emotionally attached to it. After I retired I could not bear to see the way it was, hence have taken to caring for the place full time myself. I clean it daily and make sure no one defaces what is left of it or disrespects the prayer area.’ 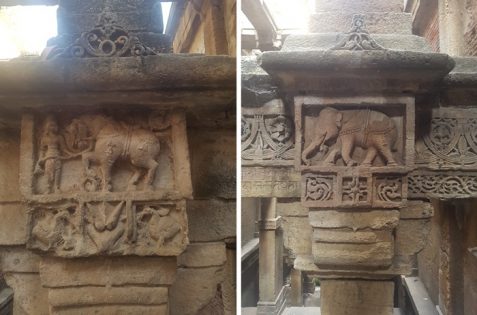 Showing us the cracks in the walls and pillars he shares, ‘in spite of repeated requests and reminders to the concerned authorities no one has bothered to do anything. It’s been years, I don’t know what else to do now…’

We left the vav for the second time, the feeling of despondency heavy in our hearts.

For travellers who love to visit the lesser known destinations, the Sevasi Vidyadhar Vav is a ‘must see’ and probably soon, before it crumbles collapses due to absence of both the literal and metaphorical external support, it so dearly deserves.

All images of Sevasi Vidyadhar Vav clicked by the author herself.

How Heliodorus, a Greek, Built Vishnu Stambh and Temple 3300 Years Ago