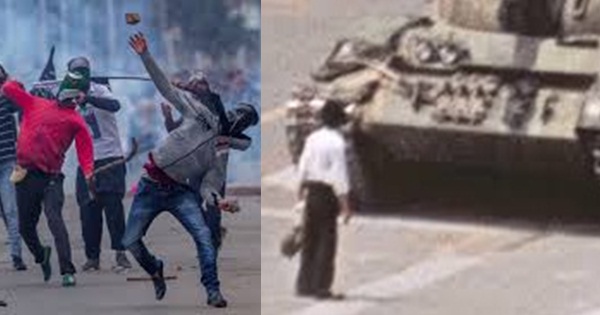 “When a Chinese athlete wins a gold medal at the Olympics, what do you feel?”

“Does it bring tears to your eyes when the Chinese anthem is played and the athlete stands on the podium?”

“If you don’t feel anything, go to your class teacher and understand why you don’t have tears?”

The above are some of the questions that the school students in Hong Kong had to answer before the last Olympics. Their teachers presented it to them. It was compulsory for them to answer. Shown by a friend who translated it from Chinese, she had asked my opinion as a psychologist.

As she also told me almost all the students in the schools had answered in the negative making the Principals being called to explain why their students were so insensitive and what steps they would take to bring patriotism in them.

Each question was a subliminal statement designed to brainwash the mind of a child.

“Who has thought of it?” I had asked her.

“Chinese authorities are very angry,” she had replied. “They find that time is passing out and Hongkongers do not show patriotism towards China. So, now they are determined and want to make them true citizens by posing such questions.”

The above is one of the many ways in which China is trying to gain control over the minds of the children of Hong Kong. Nothing less than falling teardrops from eyes will convince the authorities that the Hong Kong children are becoming true Chinese citizens, human beings devoid of spontaneity and any emotions of their own, a characteristic of a totalitarian society where any dissent or protest against the authorities is a cardinal sin often punishable by death. This is what the Hongkongers have understood too well in the last thirty years ever since the British left them.

When the choice is to be between turning into a robot devoid of will and humanity, where you prove your citizenship by laughing and crying as dictated by the State as in an Orwellian nightmare, the people of Hong Kong are choosing the right to be, the right to have their own emotions first. It is a choice between freedom and being part of a totalitarian State where you lose the last of the freedoms to be as Victor Frankel put it in his book ‘Man’s search for meaning’.

There was no religious issue in Hong Kong protests. No call from mosques asking the ‘infidels’ to leave or they will be killed like in Kashmir. No threats that their women will be converted to make a new country. No, those aren’t the issues that the Hongkongers are protesting about. They are protesting about a basic right – the right to live not as an automaton but as a free being with a choice unknown to totalitarian States.

Unlike his Hong Kong counterpart, the protester of Kashmir walks as a free being. He flaunts his stones and guns with pride and without much fear. He walks out of the mosque after the sermon, a stone in one hand, a cloth covering his face. He has just been paid rupees few hundred for the day by his leaders to throw stones at the Indian army and the police. Little do they know why they are throwing stones except that they are infidels who are his oppressors. This has been going on for the last thirty years and started by throwing out half a million infidels from the valley and destroying their temples. If they had tried to do something similar in China, the results can be well imagined.

Maybe there is one similarity and only one between the two. Both are at the prime of youth, boiling with rage against the power, the authorities but while one is genuine and is against injustice, the other has its origin in religious bigotry and hatred. Its origin perhaps lies in the sermon which they have just heard where imams have told him to go throw stones, pick up Kalashnikovs and threaten violence.

Not very many people know that brainwashing as a tool originated in China. It was a psychological form of torture used by Communists to force political dissidents to toe the official ideology, to tell them they are wrong in their thought processes and need indoctrination. Millions were incarcerated. Some even died or led a vegetable like existence. Those who didn’t, the only way was to follow the official line and orders like an automaton, be a subservient obedient robot who moves at the command of his masters.

While in Hong Kong the protesters are resisting a violent ideology, in Kashmir it is the very protesters who have been brainwashed being made to believe that they are victims of persecution.

What many journalists choose not to see in their writings about Kashmir is that the Indian government has corrected a historical wrong that denied the rights to its own people. In doing so the media shows one thing unequivocally that neither has the fault line that colonialism constructed towards Hindus has changed nor the mindset remaining the same even after seventy years.

A human rights worker once told me that Hong Kong, Tibet and Taiwan are three mirrors around China showing the Chinese a reality they have to face one day. When asked what she meant, she said that all three are perpetual reminders of the power of the State vs Individual.

“Do you know,” she had said, “Hong Kong remembers Tienanmen Square more than China ever does. China can never understand why Hongkongers remember it so much and its deepest fear is the spirit of Hong Kong that is the spirit of freedom will flow and destroy every trace of totalitarianism. That is why they want to crush Hong Kong.”

During the years I spent in Hong Kong, every year I went for the commemoration of Tienanmen Square massacre. It was a unique ceremony to remember and commemorate those who died there thirty years ago in 1989. Almost half a million people come together to remember the students and pro-democracy people who captured the Square protesting and asking to be treated with dignity and equality, a language China has known only to silence.

This happened almost at the same time when the protesters of Kashmir threw out half a million Hindus from amidst them making the valley Islamic. They denied the human right of the Hindus and their right to live there because they belonged to another religion and refused to convert. The world had remained silent then to both the human tragedies.

The journalists who are today comparing the two and finding the similarities perhaps will do well to ask their conscience why they remained silent then and are once again silent and will only prove that it is the perpetrator and the powerful whose side they chose to take and write. They may soon learn they are on the wrong side of the history.

To China, who today is talking of the rights of Kashmiris and their freedom, would do well to remember that it is her own people who are longing for freedom and justice.