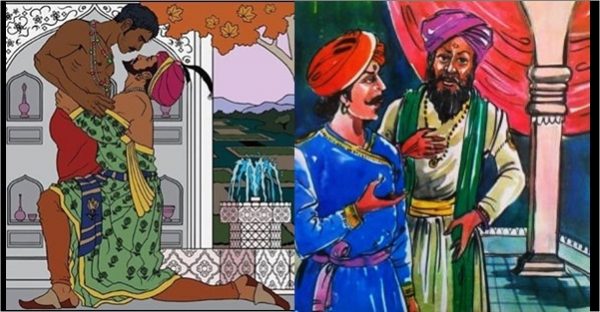 Not many are familiar with Alauddin Khilji’s gay relationship with Malik Kafur. Have you heard about an aged Gora Singh thundering and ripping off Khilji’s bottoms? Have you heard about how a teenage Badal Singh held Khilji’s army with a handful of braves to allow the king Rawal Ratan Singh reach Chittor Fort safely?

But everyone is familiar with Alauddin Khilji after Bollywood glorified him in the film Padmavat.  His real name was Ali Gurshasp. He was both a nephew and son-in-law of Jalaluddin, who laid the foundation of the Khilji dynasty in India in 1290 after deposing the Mamluks. The Mamluk dynasty was founded by Qutub-ud-din Aibak. Jalaluddin, after assuming power of the Delhi Sultanate, made Alauddin Khilji the Amir-i-Tuzuk (equivalent to master of ceremonies).

By dint of his capabilities of raiding and plundering kingdoms, razing temples to the ground, converting many to Islam, and looting wealth, Khilji became the governor of few dominions under the Delhi Sultanate. He proclaimed himself the Sultan of Delhi after killing his father-in-law and uncle Jalaluddin in 1296 AD. Do you know Khilji wished to become the second Alexander? His title of Sikander-e -Sani was mentioned on coins and public prayers!

Malik Kafur was a fearless beardless handsome eunuch. Alauddin Khilji had a weakness for beardless boys. According to historical sources, he had several thousand beardless boys in his harem. He bought Kafur for 1000 dinars during his Gujarat expedition. Taking advantage of Khilji’s weakness, Kafur gave in and took complete advantage to rise to ranks of power, by successfully raiding kingdoms, winning wars, plundering wealth, destroying temples, and converting many to Islam. Chronicler Ziauddin Barani, also a political thinker of the Delhi Sultanate in the 14th century, has mentioned about the gay affair between Alauddin Khilji and Malik Kafur in his book Tarikh-e Firuz Shahi.

According to an account by Abdul Malik Isami, a 14th-century historian and court poet under Ala-ud-Din Bahman Shah, the founder of the Bahmani Sultanate, Malik Kafur was a Hindu. He was forced to convert to Islam after he was captured. Isami described Kafur as a Maratha. Before being sold to Khilji, Kafur, as a Hindu, worked for a Sufi teacher in Gujarat. Malik Kafur was also called Malik Naib.

Alauddin was so infatuated with Malik Kafur that the Sultan always gave him the highest regard, compared to his other friends and helpers. As per accounts by Ziauddin Barani, when Alauddin was ill and was losing his memory and his senses, he had fallen deeply and madly in love with Malik Kafur. He even entrusted him with ‘the responsibility of the government and the control of the servants’. According to Ruth Vanita and Saleem Kidwai, both gay studies scholars who studied Barani’s book, Khilji and Kafur were in a homosexual relationship.

80-year-old Gora Singh and teenage Badal Singh were chacha – bhatija who belonged to the Chauhan dynasty of Jalore! Gora Singh was one of the generals of the Chittor army. According to one account, he was a chief, who along with Badal and four other chiefs, accompanied Rani Padmavati to Chittor after her marriage with the Chittor king. All of the six chiefs were considered higher in rank than all the warriors in the Chittor army.  Gora and Badal were also kinsmen of queen Padmavati. They addressed the Raja as ‘jija’ (brother-in-law).

In the history of Rajasthan, the names of Gora and Badal have been written in golden letters. Pandit Narendra Mishra has given a wonderful tribute to Gora Singh and Badal Singh through a poem, reading which you will experience goose bumps.

During the reign of Khilji, Mewar was ruled by Rana Ratan Singh. Mewar’s defense was the formidable and well fortified Chittor Fort, built during the 7th century. This fort, spread across 700 acres the fort, had stood robust against the tides of time and attacks!

Rana Ratan Singh married Padmavati, the daughter of the Singhal (Manohargarh) king Samman Singhji Panwar, in a swayamvar ceremony.  Padmavati was so beautiful that her charisma was the talk of the continent, far and wide.

Khilji heard a lot about the zinc and silver mines of Rajasthan. He also heard a lot about Rani Padmavati’s beauty. He developed feelings of lust for the queen and desired to make her his mistress. In January 1303, he marched to Chittor Fort with a huge army. The strong defense in and around the fort dampened his spirits.

Rana Ratan Singh, identifying the strength of Khilji’s army, pondered on how to avoid a battle. Alauddin Khilji sent a messenger to the Chittor court that he would return to Delhi with his army if was allowed a glimpse of Rani Padmavati.

In Ratan Singh’s court, it was Gora Singh who first objected to the proposal by Khilji.  Following his advice, the witty Padmavati agreed to the proposal on one condition that Khilji could look at her reflection only in a mirror. The sultan agreed. He came with his trusted generals. Seeing Padmavati’s reflection in the mirror, Khilji was dumbfounded. His desire to possess her only increased. According to some accounts, the Rajputs did not allow the Sultan look at the queen’s reflection in the mirror.

Keeping his words, Khilji proceeded towards his camp. Ratan Singh escorted him, as a sign of courtesy, to the gate of the fort. Khilji deceitfully made Ratan Singh a prisoner and imprisoned him in his camp. He sent a message to the Chittor fort, demanding Rani Padmavati in exchange for the king.

The witty Padmavati, following the advice of Gora Singh, devised a plan. She sent a messenger to Khilji, saying she would reach the camp in the morning with her maids in palanquins. Gora Singh and Badal Singh along with several soldiers armed with weapons, were to go to Khilji’s camp in the morning. Disguised as women, few sat in the palanquins while the rest took the role of bearers of 200 palanquins.

On reaching the camp, Gora Singh himself went to Ratan Singh’s tent and asked Badal to handle Khilji’s army and rescue the king. At Khilji’s tent, he single handedly resisted the advances of Khilji’s guards. Gora ripped Khilji’s bottoms. He was about to kill the Sultan, but stopped short. He failed to strike at him. Why? Because Khilji suddenly hid behind his concubine. Indian warriors never attacked women. Killing Khilji would mean killing the woman too. As he was hesitating to strike, Ghazi Malik struck Gora Singh from behind. The brave old general attained martyrdom.

Meanwhile, Khilji’s army reached the spot and a fierce fight ensued. Rana Ratan Singh was rescued amid bloodshed. Gora and Badal and almost all of the Rana’s army sacrificed their lives.

Khilji laid siege of Chittor Fort on all sides. All gates remained closed. This continued till August (started in January). The stored food items were all exhausted. On 26th August, 1303, Ratan Singh with his army, donning saffron turbans, made a suicide attack against the enemies. Their goal was to defend or die. In the battle that followed, they perished.

A huge pyre was lit within the fort following Rani Padmavati’s orders. Rani Padmavati and thousands of her companions, to save their honor, rather than being dishonored in the cruel enemy’s hands, jumped into the pyre, performing Jauhar. They perished in the flames.

1. The African Dispersal in the Deccan: From Medieval to Modern Times, Shanti Sadiq Ali