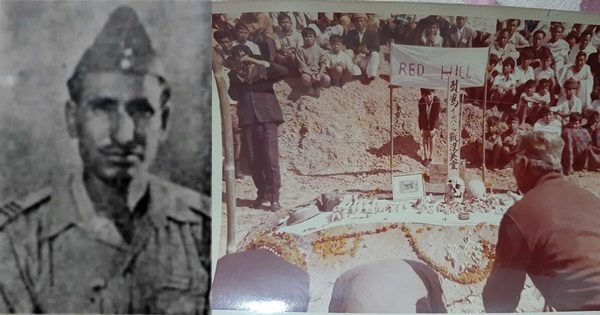 Capt Mansukhlal was one of the bravest soldiers of Azad Hind Fauz (INA), who was awarded with two gallantry medals (Sher e Hind – highest gallantry award and Sardar e Jung) by Netaji Subhash Chandra Bose for his valor in battlefield against British. He commanded a company of Gandhi Brigade that was the part of Second Battalion Number 2 Guerrilla Regiment (Gandhi Brigade) in the Battle of Imphal against the Scottish C Highlanders forces of the British.

In this battle Capt Mansukhlal was hit by 13 bullets and was badly wounded yet he continued with his battlefield exploits. The INA won this battle initially but was asked to retreat due to lack of supplies on the advice of Lt Gen Kawabe of the Imperial Japanese Army. Capt Mansukhlal breathed his last in the early 1990s. 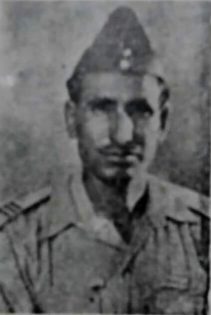 The Scottish C Highlanders were 3000 in number while INA forces were about 600. Gandhi Brigade’s second Battalion was deployed in the operations.

As per strategic planning, there are only two major roads till date that connect Imphal, National Highway number 37 connecting Silchar to Imphal and NH 2 connecting Imphal to Kohima. Both highways and strategic hills were fortified by INA along with Japanese 30th and 33rd division in the Imphal Kohima campaign. Heights play a great role in securing objectives such as security of strategic roads in the military operations. 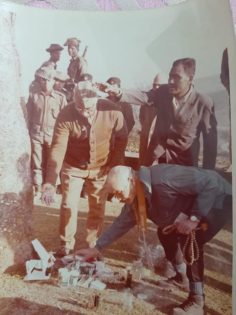 Col Gurbakhsh Singh Dhillon of Indian National Army with troops of Gorkha Regiment of Indian Army on the top of red hill in January 1973.

When Capt Mansukhlal was leading assault for the Red Hill, it was a suicidal operation because INA forces was heavily outnumbered but yet the brave troops assured their Brigade commander Col Inayat Kiani and Divisional Commander Maj Gen Mohammad Zaman Kiani that they would not give up.

When Col Inayat Kiani asked who would volunteer assault, Captain Mansukhlal came forward. He volunteered to lead the assault to capture Red Hill. 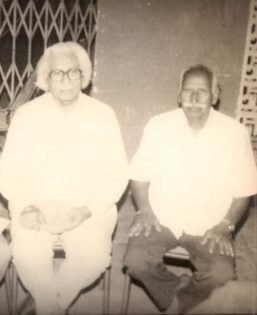 The battle started. In this battle Capt Mansukhlal was hit by 13 bullets. Yet he denied to be evacuated. He kept inspiring his troops when the blood was flowing out from his wounds. His legs were shaking yet he ordered his troops to forget him and just get the hill captured at any cost. There was no artillery fire too during the assault when INA troops were advancing towards the hill.

When the INA troops saw such was the valor and dedication of their commander, their emotions were filled with fierce bravery and inflicted heavy casualties on the forces of SC Highlanders. The British commanders ran away like rats. 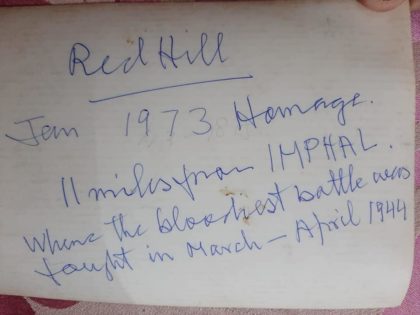 Hand written note of Colonel Gurbakhsh Singh Dhillon during his homage to the martyred soldiers when he visited red hill in 1973.

This fierce Battle reminds me the assault of Tololing hill, Tiger Hill during Kargil War and the battle of Hajipir Pass during 1965 Indo Pak War. At least during Kargil War, there was artillery cover provided but in the Battle of Red hill, there was no artillery fire support for INA troops. The enemy was sitting with light machine guns on the top of the hill.

Later on when Captain Mansukhlal was taken back to the hospital, British Captain Brown had launched a counter attack but the brave INA Major Khazan Singh of Gandhi Brigade had captured him alive and was taken as a POW by INA. This paralyzed the momentum of the British forces for many days. 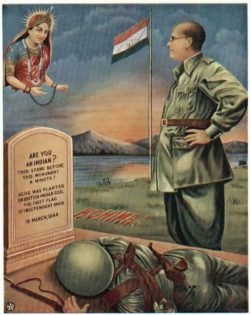 Col Gurbakhsh Singh Dhillon of INA in a function during 1980s in Ghaziabad said, “Though I was senior to Capt Mansukhlal in rank during the time of INA yet he was senior among all of us in bravery and hence Netaji Subhash Chandra Bose awarded him highest wartime gallantry award of INA- Sher E Hind”. This is one of the bloodiest battles that INA fought.

As per the article published by international agency Reuters during the 70th anniversary of World War 2 in 2013, the toughest battle that British Forces fought was the Battle of Imphal-Kohima Campaign.

To quote article published by Journalist Angus Macswan in Reuters published on 21st April 2013,  “The Battle of Imphal/Kohima, when British troops fighting in horrendous jungle conditions turned the tide against the Japanese army in World War II, has been chosen as Britain’s greatest battle. 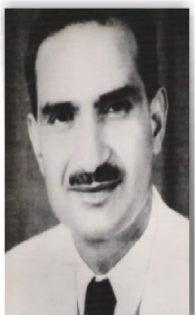 Kohima was picked over the more celebrated battles of D-Day and Waterloo in a contest organised by the National Army Museum. Rorke’s Drift in the 1879 Zulu War and the Battle of Aliwal in the Anglo-Sikh War in Punjab in 1846 brought up the rear.

“Great things were at stake in a war with the toughest enemy any British army has had to fight,” historian Robert Lyman said, making the case for Kohima in a debate at the museum. 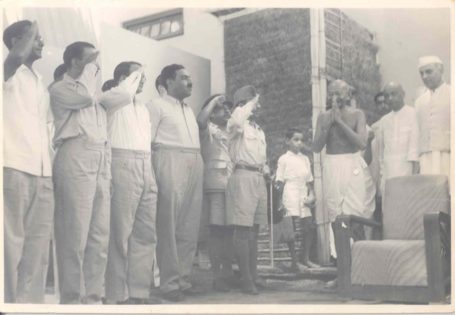 If Lieutenant General William Slim’s army of British, Indian, Gurkha and African troops had lost, the consequences for the allied cause would have been catastrophic, he said.

The contest’s criteria included a battle’s political and historical impact, the challenges the troops faced, and the strategy and tactics employed.

Waterloo had topped an online poll which produced a list of 20 land battles fought since the English Civil War. The top five were debated on Saturday before going to an audience vote.

The winner was something of a surprise given the enduring prominence of Waterloo and D-Day/Normandy in Britain. Indeed, the troops who fought in India and Burma in World War II called themselves “The Forgotten Army”. 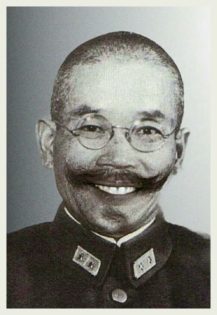 Lt Gen Kawabe of the Imperial Japanese Army who had withdrawn supplies in the later phase.

The Battle of Imphal/Kohima took place in 1944 in Nagaland when Japanese troops poured over the Burmese border to strike at India. Fought over a vast area of jungle and mountain, it was marked by vicious hand-to-hand fighting.

In fact, Lyman said: ‘This was the last real battle of British Empire and the first battle of the new India.’ The Indian troops “weren’t fighting for the British or the Raj but for a newly emerging and independent India and against the totalitarianism of Japan.’

He ranked it with Midway, El Alamein and Stalingrad as the main turning point battles of World War II.”

This article is written by Shubham Sharma, great grandson of Maj KP Sharma, who led a mass revolt against British in Jabalpur following INA Trials in Red Fort; Shubham’s forefathers were in Azad Hind Fauz. His youngest great grandfather was Lt Colonel Kunwar Bahadur Sharma who was second in command of Bahadur Brigade of INA. He is also a close associate of Col GS Dhillon’s family who was tried in Red Fort, famous as INA Trials. All photographs provided by Shubham Sharma.

Through the Rain of Bullets: How Haifa was Captured by Indian Gallantry