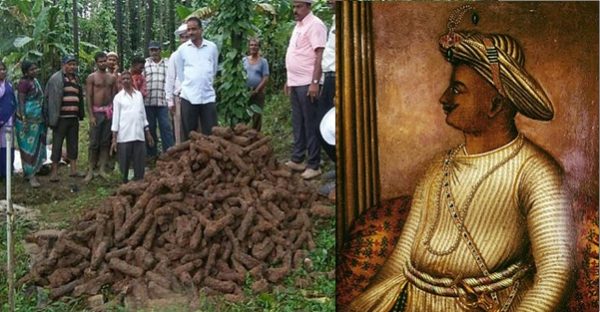 Dailymail.co.uk carries this news headlines on 31st July 2018 – ‘The rocket cache of an 18th-century Indian warrior king: 1,000 missiles believed to be among the first ever used in battle are found in abandoned well’ on the excavation of over a thousand rockets of Tipu Sultan. Excavations were done in an abandoned well at Old Bidanuru village of Hosanagara taluk in Shivamoga, some 385 kilometres (240 miles) northwest of state capital Bangalore in Karnataka. Department of Archaeology, Museums and Heritage (DAMH) took up the research and excavations.

During Tipu Sultan’s times, these rockets were kept hidden in a well. The mud of the dry well smelt like gunpowder. This led the 15-member team of archaeologists, excavators and labourers to dig the well. It took three days for the team to unearth the missiles. These were in a pile. The missiles measured between 23 and 26 centimetres (12-14 inches). Interested visitors can view them; these would be kept for public display at a museum in Shivamoga.

Though rockets have been in use in ancient India as depicted in the epics and scriptures, the dailymail.co.uk report mentions about use of rockets in warfare since the 13th century. In the book BAKHAR OF PANIPAT, a first hand account of the battle of Panipat by Raghunath Yadav, the Marathas took 25,000 rockets in their military expeditions. This proves that even before Tipu Sultan, the Marathas developed and used rockets. But, Tipu has been glorified here in the report as one of the first developers of the rocket.

As per the report, ‘Tipu Sultan is credited with developing an early, indigenous rocket known as the Mysorean rocket, a prototype of British Congreve rockets used in the Napoleonic wars. Tipu planned, designed and crafted cylindrical iron tubes that would allow for great compression of the filled gunpowder and consequently, greater range (nearly 2 km). Tipu then fastened them to swords or bamboo poles to provide stability, that would, in turn, lead to better accuracy (right). These missiles were fitted with swords and traveled several metres through the air before coming down with edges facing the enemy.’

‘Rockets could be of various sizes but usually consisted of a tube of soft hammered iron about 8 inches (20 cm) long and 1.5 to 3 in (3.8 to 7.6 cm) in diameter, closed at one end and strapped to a shaft of bamboo about 4 ft (1 m) long.  The iron tube acted as a combustion chamber and contained well-packed black powder propellant. Hyder Ali, the 18th century ruler of Mysore, and his son and successor Tipu Sultan used them effectively against the British East India Company during the 1780s and 1790s.’

Did Tipu Sultan develop these rockets only to use against the British? If the answer is ‘yes’, it is vague. The Mysore Sultanate did involve in wars against the British in succession with signing of peace treaties in between. But both powers indirectly tried to maintain supremacy over the other and directly over the Indians. Tipu was killed during the 4th Anglo Mysore war on 4th May 1799.

Within a short period of their military expeditions in Southern India, both Hyder Ali and Tipu Sultan massacred thousands of Hindus, razed almost all temples to the ground, destroyed the idols and confiscated temple wealth. They converted many to Islam. This fact is proven by numerous historical accounts.

The truth about what the father-son duo had done in the Malabar region had been veiled in History text books. The major part of Tipu Sultan’s rule was spent in conducting military operations for subjugating Malabar. Wars of territorial conquest waged in Malabar by Hyder Ali Khan were intended more for spreading the Islamic faith by killing and forcible conversion of Hindus , than for expanding his kingdom. His atrocities were coupled with widespread destruction of Hindu temples.

Hyder Ali Khan had expressed his satisfaction for these cruel achievements. A broad picture of atrocities committed against the Hindu population of Malabar by the army of Hyder Ali Khan can be had from the diary notings of a Muslim officer of the Mysore army as edited and published by the then surviving son of Tipu Sultan, Prince Ghulam Muhammed (Cited in Malabar Manual, William Logan).

Before his efforts to conquer the entire Malabar region could succeed, Hyder Ali Khan died in December, 1782. Tipu Sultan who succeeded his father, considered it his primary duty to continue this unfinished task. However, the Islamic fanaticism of Tipu Sultan was much worse than that of his father. His war-cry of jihad was ‘Sword’ (death) or ‘Cap’ (forcible conversion). This makes very clear the character of Tipu Sultan’s military operations that started in 1783.

The intensity and nature of sufferings which the Hindu population had to bear during the nightmarish days of Padayottakkalam (military regime) were vividly described in many historical records preserved in the royal houses of Zamorin and Kottayam (Pazhassi), Palghat Fort and East India Company’s office. There is no apparent reason to disbelieve them. It is absurd and against reason to describe all this evidence as being forged for the purpose of creating enmity between Hindus and Muslims (as presumed by Dr. C.K. Kareem and others).

During the cruel days of Islamic operations from 1783 to 1791, thousands of Nairs besides about 30,000 Brahmins had fled Malabar, leaving behind their entire wealth, and sought refuge in Travancore State (according to the commission of enquiry appointed by the British soon after Tipu Sultan’s death).

If one accepts even a small portion of the Islamic atrocities described in this monumental work of history, then Tipu Sultan can be depicted only as a fanatic Muslim bigot. The historical works of Col. Wilks (Historical Sketches), K.P. Padmanabha Menon and Sardar K.M. Panicker (Kerala History), Elamkulam Kunjan Pillai (research articles) and others, also do not project Tipu Sultan in any better light. One of the leading Congressman of pre-independence days, K. Madhava Nair, observes on page 14 of his famous book, Malabar Kalapam (Mappila outrage):

“The communal Mappila outrage of 1921 in Malabar could be easily traced to the forcible mass conversion and related Islamic atrocities of Tipu Sultan during his cruel military regime from 1783 to 1792. It is doubtful whether the Hindus of Kerala had ever suffered so much devastation and atrocities since the reclamation of Kerala by the mythological Lord Parasurama in a previous Era. Many thousands of Hindus were forcibly converted into Muhammadan faith.”

So are the recently excavated missiles a sign of Tipu Sultan’s failed attempt of murdering of more Hindus of South India?