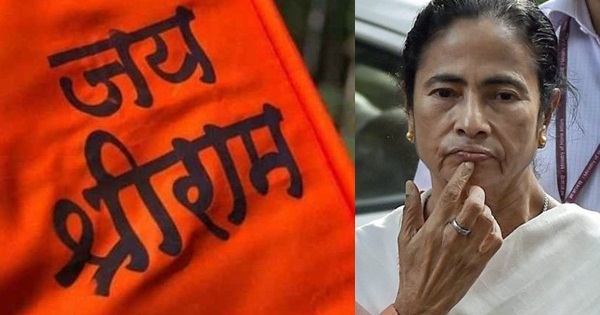 India, it is said, lives in her villages. But she can be understood through the slogans that rents her skies and the way her rulers try to suppress them. In today’s Bengal saying ‘Jai Shri Ram’ is like showing a red flag to a bull, or as some might say in the present times, a cow.

Slogans have led to many changes in India’s history. They have even led to its vivisection. The slogan of ‘Vande Mataram’ and the British retribution to it filled Indians with a yearning for freedom. Some other slogans have led to mass violence and soaked our land in blood.

All of them without doubt are linked to memories of a turbulent past that have not found a closure to. The slogan ‘convert to Islam or leave Kashmir or die’, ‘leave your women behind to make a new Pakistan’ from the loudspeakers of the mosques in Kashmir made half a million Hindus leave their homeland and run away to safety. The slogan ‘ladke lia Pakistan, jitke lenge Hindustan’ in 1947 made Hindus and Sikhs of Pakistan realize that they were against an enemy who will one day exterminate them.

Slogans have power to change minds and therefore, the retaliation to it is as brutal as it can be. For many a paranoid and delusional leaders, it represents a danger to their power that people are no longer with them.

The slogan of ‘Jai Shri Ram’ is as old as the Indian civilization itself and rooted in the identity of India. It is used as a greeting in village corners, your religion being immaterial. But what is unique today is the reaction of someone in power who has decided it won’t be allowed to be said anywhere nearby where she goes. She reacts as the head of a theocratic Islamic state where raising slogans by ‘infidels’ must be punished. Travelling with a cavalcade of policemen, eyes glaring, she stops whatever she is doing and runs towards the people daring them to say in front of her. A new role model has arisen on the horizon for all ‘jihadis’ and ‘missionaries’.

Prohibiting slogans to express your faith is nothing new for Hindus. Mughal emperors prohibited it though they didn’t get down from their elephants to chase their subjects and put them in jail. The Christian priests of Goa went a step further. They skinned the infidels alive who refused.

Today the most rabid bigoted fanatic may find it unable to match this behavior for sheer madness. No Zakir Naik, no missionary out to convert Hindus perhaps even thought they would find such an icon as their messiah. This is an example of a leadership that will make their task easier. The two hundred men who came in a lorry yesterday to kill, where is their inspiration coming from? Where is this hatred coming from? Why is the political getting mixed with the personal in today’s Bengal in such a diabolical form? A language soaked in violence flows from an elected leader along with a threat to remain silent? Is it not churning out of hatred against Hindus? Why is everyone silent? Isn’t this hatred a forerunner of a mass violence that has been repeated many times in our history? When the cup is filled to the brim and one more drop falls, doesn’t it overflow?

The Direct Action day 2019, part two, act one. The blame will be put on Hindutva as usual. They deserved the killing by raising slogans just like they did in Godhra or in Kashmir where they took all the jobs away. The script is old and familiar, rotten with perfection by now and written with changes keeping in mind there is now social media.

Bengal has survived many a genocide in the past. Today it is a land soaked in blood. The origin of all genocide start when the people of a certain faith are thought of as less human and their faith, their religious practices including slogans as discriminatory. Today when you can go to jail for saying ‘Jai Shri Ram’ but not for saying ‘Allah o Akbar’, have to defer your immersion for your goddess in the river because it clashes with another festival, it signifies a society marked by bigotry and hatred for Hindus. A mass violence or genocide may be only a step away.

The slogan ‘Jai Shri Ram’ has a rather long and tragic history. There have been times when Hindus would not dare to raise it for fear of being punished. Not definitely during the times of Islamic invaders or Mughal emperors. Did they feel like after the Ram Temple was destroyed by Babur? Even if they could, they probably wouldn’t do it for shame. My mother tells me that in her home state of Bihar she saw some men raise ‘Jai Shri Ram’ on Ram Navami going on a road and they were attacked with stones.

If this slogan is stopped in Bengal, will it not give birth to more fanaticism? Can we learn from history and choose not to be silent?

In its history the slogan ‘Jai Shri Ram’ never created any war, never asked anyone to convert, never broke any religious structure, never created any hatred for another. Then why has it become so threatening? Is the power of this slogan touching a deep nerve because of a history associated with a million memories?

A few years ago, in Hong Kong there was a rally for the remembrance of Tiananmen Square victims. Almost half a million people gathered like they did every year. Next to me was a young Hong Konger. We exchanged pleasantries and he shared he works in a bank in mainland China and comes every year on this day.

“What gives you the courage?” I asked.

“Remember the ‘tank man’,” he said smilingly, “if he, a single man, could stand in front of the tank then why can’t I, for the sake of freedom of my children?”

Everywhere the battle for justice, for freedom is between a single person who is opposed by brutal state power. Like the ‘Tank man’, the men and women who shout slogans in Bengal do so knowing there lies a retribution that may even lead to death.

The slogan ‘Bharat tere tukde honge’ told the average Indian that his freedom is fragile and vulnerable and can be destroyed by enemies within and our nation is encircled by vultures. That if we don’t protect our freedom today, our religion may become extinct by another generation.

‘Vande Mataram’ taught us of our spiritual past and gave our shattered race a new identity after a millennia. The slogan ‘Give me your blood, I will give you freedom’ filled a defeated race with pride to fight the British Empire.

The slogan of ‘Jai Shri Ram’ may one day too stand out for something far more than a salutation to Sri Ram and tell the story to our future generations of why Hindus struggled hard for centuries to uphold their civilization.

Ambedkar on Mopla Atrocities against Hindus and Gandhi’s Attitude