Ambedkar on Mopla Atrocities against Hindus and Gandhi’s Attitude 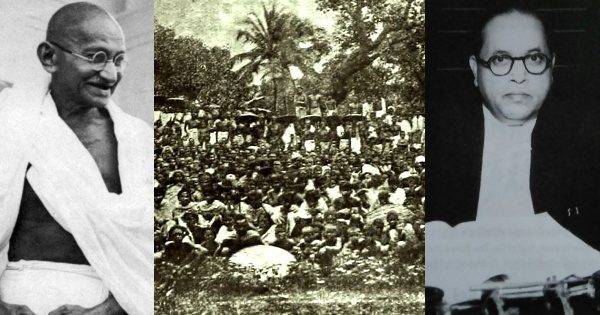 What is the outcome when a twisted narrative about certain genocide is portrayed? The truth gets hidden and the perpetrators gloried! This is the case with the Mopla genocide of Hindus that took place in the year 1921. Location: Mopla (also called Moplah), Malabar in Kerala. What started in support of the Khilafat movement and resistance against the British ended up in massacre of thousands of Hindus! Thousands were forcefully converted, Hindu women raped, temples destroyed, and properties of Hindus destroyed and looted by the Muslims. But neither history textbooks nor mainstream narratives describe this brutal atrocity against the Hindus of Mopla.

The Khilafat movement, a pan-Islamist protest launched in India, had nothing to do with the freedom struggle. It was a protest to restore the caliph of the Ottoman Caliphate. But Mohandas Karamchand Gandhi supported the Khilafat Movement, which later led to partition of the country and suffering of Hindus.

Dr BR Ambedkar in his book Pakistan of Partition of India, first published in December 1940 by Thacker & Co Ltd., has described in detail about the atrocities in Mopla against Hindus and on Gandhi’s attitude. Here are excerpts from the book (text put as it is; italicized words are put by team for maintaining uniformity):

Mr. Gandhi has been very punctilious in the matter of condemning any and every act of violence and has forced the Congress, much against its will to condemn it. But Mr. Gandhi has never protested against such murders. Not only have the Musalmans not condemned these outrages but even Mr. Gandhi has never called upon the leading Muslims to condemn them. He has kept silent over them. Such an attitude can be explained only on the ground that Mr. Gandhi was anxious to preserve Hindu-Moslem unity and did not mind the murders of a few Hindus, if it could be achieved by sacrificing their lives.

This attitude to excuse the Muslims any wrong, lest it should injure the cause of unity, is well illustrated by what Mr. Gandhi had to say in the matter of the Mopla riots. 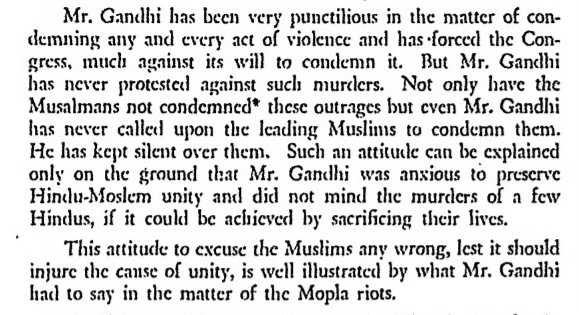 The blood-curdling atrocities committed by the Moplas in Malabar against the Hindus were indescribable. All over Southern India, a wave of horrified feeling had spread among the Hindus of every shade of opinion; which was intensified when certain Khilafat leaders were so misguided as to pass resolutions of “congratulations to the Moplas on the brave fight they were conducting for the sake of religion”. Any person could have said that this was too heavy a price for Hindu-Moslem unity. But Mr. Gandhi was so much obsessed by the necessity of establishing Hindu-Moslem unity that he was prepared to make light of the doings of the Moplas and the Khilafatists who were congratulating them. He spoke of the Moplas as the “brave God-fearing Moplas who were fighting for what they consider as religion and in a manner which they consider as religious”. Speaking of the Muslim silence over the Mopla atrocities, Mr. Gandhi told the Hindus,

“The Hindus must have the courage and the faith to feel that they can protect their religion in spite of such fanatical eruptions. A verbal disapproval by the Mussalmans of Mopla madness is no test of Mussalman friendship. The Mussalmans must naturally feel the shame and humiliation of the Moplah conduct about forcible conversions and looting, and they must work away so silently and effectively that such a thing might become impossible even on the part of the most fanatical among them. My belief is that the Hindus as a body have received the Mopla madness with equanimity and that the cultured Mussalmans are sincerely sorry of the Mopla’s perversion of the teaching of the Prophet”.

The Resolution passed by the Working Committee of the Congress on the Mopla atrocities shows how careful the Congress was not to hurt the feelings of the Musalmans.

“The Working Committee places on record its sense of deep regret over the deeds of violence done by Moplas in certain areas of Malabar, these deeds being evidence of the fact that there are still people in India who have not understood the message of the Congress and the Central Khilafat Committee, and calls upon every Congress and Khilafat worker to spread the said message of non-violence even under the gravest provocation throughout the length and breadth of India.”

“Whilst, however, condemning violence on the part of the Moplas, the Working Committee desires it to be known that the evidence in its possession shows that provocation beyond endurance was given to the Moplas and that the reports published by and on behalf of the Government have given a one-sided and highly exaggerated account of the wrongs done by the Moplas and an understatement of the needless destruction of life resorted to by the Government in the name of peace and order.

“The Working Committee regrets to find that there have been instances of so-called forcible conversion by some fanatics among the Moplas, but warns the public against believing in the Government and inspired versions…..

The resolution passed by the Working Committee of the Congress completely twisted the details of the Mopla atrocities against Hindus. It mentioned only three cases of forcible conversion. To quote from BR Ambedkar’s book, In reply to a question in the Central Legislature (Debates 16th January 1922) Sir William Vincent replied “The Madras Government report that the number of forcible conversions probably runs to thousands but that for obvious reasons it will never be possible to obtain anything like an accurate estimate”.

Several ‘instances of Muslim intransigence, over which Mr. Gandhi kept mum are recorded by Swami Shradhanand in his weekly journal called the ‘Liberator’. Swami Shradhanand wrote on the 26th August 1926 in this journal on Mopla genocide and Gandhi’s indifference thus,

“The first warning was sounded when the question of condemning the Moplas for their atrocities on Hindus came up in the Subjects Committee. The original resolution condemned the Moplas wholesale for the killing of Hindus and burning of Hindu homes and the forcible conversion to Islam. The Hindu members themselves proposed amendments till it was reduced to condemning only certain individuals who had been guilty of the above crimes. But some of the Moslem leaders could not bear this even. Maulana Fakir and other Maulanas, of course, opposed the resolution and there was no wonder. But I was surprised, an out-and-out Nationalist like Maulana Hasrat Mohani opposed the resolution on the ground that the Mopla country no longer remained Dar-ul-Aman but became Dar-ul-Harab and as they suspected the Hindus of collusion with the British enemies of the Moplas. Therefore, the Moplas were right in presenting the Quoran or sword to the Hindus. And if the Hindus became Mussalmans to save themselves from death, it was a voluntary change of faith and not forcible conversion — Well, even the harmless resolution condemning some of the Moplas was not unanimously passed but had to be accepted by a majority of votes only. There were other indications also, showing that the Musalmans considered the Congress to be existing on their sufferance and if there was the least attempt to ignore their idiosyncrasies the superficial unity would be scrapped asunder.”

What was the Mopla Rebellion? In BR Ambedkar’s words, as described in the same book quoted above,

Beginning with the year 1920 there occurred in that year in Malabar what is known as the Mopla Rebellion. It was the result of the agitation carried out by two Muslim organizations, the Khuddam-i-Kaba (servants of the Mecca Shrine) and the Central Khilafat Committee. Agitators actually preached the doctrine that India under the British Government was Dar-ul-Harab and that the Muslims must fight against it and if they could not, they must carry out the alternative principle of Hijrat. The Moplas were suddenly carried off their feet by this agitation. The outbreak was essentially a rebellion against the British Government. The aim was to establish the kingdom of Islam by overthrowing the British Government. Knives, swords and spears were secretly manufactured, bands of desperadoes collected for an attack on British authority. On 20th August a severe encounter took place between the Moplas and the British forces at Pirunangdi. Roads were blocked, telegraph lines cut, and the railway destroyed in a number of places. As soon as the administration had been paralysed, the Moplas declared that Swaraj had been established. A certain Ali Musaliar was proclaimed Raja, Khilafat flags were flown, and Ernad and Walluranad were declared Khilafat Kingdoms. As a rebellion against the British Government it was quite understandable. But what baffled most was the treatment accorded by the Moplas to the Hindus of Malabar. The Hindus were visited by a dire fate at the hands of the Moplas. Massacres, forcible conversions, desecration of temples, foul outrages upon women, such as ripping open pregnant women, pillage, arson and destruction—in short, all the accompaniments of brutal and unrestrained barbarism, were perpetrated freely by the Moplas upon the Hindus until such time as troops could be hurried to the task of restoring order through a difficult and extensive tract of the country. This was not a Hindu-Moslem riot. This was just a Bartholomew. The number of Hindus who were killed, wounded or converted, is not known. But the number must have been enormous.

Malabar has taught us what Islamic rule still means, and we do not want to see another specimen of the Khilafat Raj in India. How much sympathy with the Moplas is felt by Muslims outside Malabar has been proved by the defence raised for them by their fellow believers, and by Mr. Gandhi himself, who stated that they had acted as they believed that religion taught them to act. I fear that that is true; but there is no place in a civilised land for people who believe that their religion teaches them to murder, rob, rape, burn, or drive away out of the country those who refuse to apostatise from their ancestral faiths, except in its schools, under surveillance, or in its goals.

Extracts from Pakistan of Partition of India by Dr BR Ambedkar.