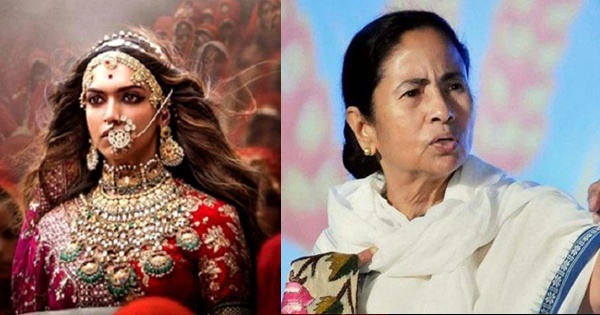 Release of Sanjay Leela Bhansali’s film Padmavati has been banned in three states – Rajasthan, Madhya Pradesh, and Gujarat. Rajasthan chief minister Vasundhara Raje said the state government would not allow the movie to be screened in the state without ‘necessary changes’ suggested by her. Shivraj Singh Chouhan, chief minister of Madhya Pradesh, while putting a ban on the film said to delegations of the Rajput community that his government won’t tolerate any ‘wrong portrayal of a character worshipped by the nation’.

Recently, Gujarat joined the league with Vijay Rupani, the Chief Minister saying that the movie hurt the sentiments of Rajputs. He said, “We can’t allow our history to be distorted. We believe in freedom of speech and expression but any foul play with our great culture is not tolerated.”

Mamata Banerjee also tweeted: The Padmavati controversy is not only unfortunate but also a calculated plan of a political party to destroy the freedom to express ourselves. We condemn this super emergency. All in the film industry must come together and protest in one voice.

Many a movie buff is eagerly awaiting the release of the 150-crore Padmavati. Even the Supreme Court refused to stay its release amid mounting protests. With Deepika Padukone as Rani Padmini, Shahid Kapoor as Rawal Ratan Singh, and Ranveer Singh as Alauddin Khilji, the plot is no wonder built around the story of Rani Padmavati.

But, is the movie a biopic on Padmavati? Will the movie do justice to the character of queen Padmavati who sacrificed her life, committing Jauhar, to save her honor? Will Bhansali do justice to the 74,500+ Rajput women, who along with Padmavati, self immolated to save themselves from disgrace, from being raped by Khilji and his men? If the movie distorts history, it will be a disgrace to Indian womanhood.

Will Bhansali portray the gay relationship between Khilji and his 1000 dinar eunuch slave Malik Kafur? Why are plunderers, looters and rapists glorified in Bollywood? In the name of ‘visual treat’, we shall only be encouraging more Bollywood directors to glorify looters and plunderers who destroyed Indian culture and heritage!

Earlier, this year, during the shoot of Padmavati, Sanjay Leela Bhansali was attacked by the Shri Rajput Karni Sena in Jaipur for ‘distorting’ history. The set was vandalised. It was because Bhansali’s film was rumored to have included a romantic interlude between Allauddin Khilji, the brutal plunderer and Rani Padmini. Later an outdoor set of the historic period drama in Kolhapur was burnt down.