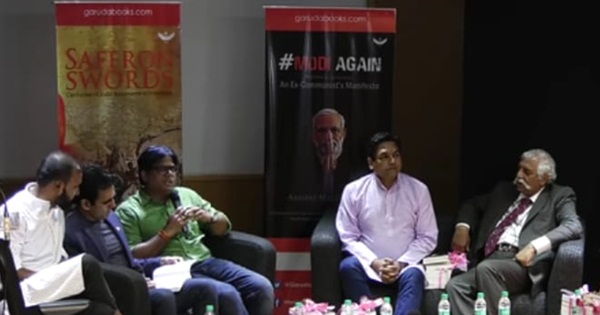 Last week I attended a book launch for a friend in Delhi. One of the speakers, a journalist of national stature who was also the compere, during his speech began to compare the working style of the two prime ministers under whom he worked, one Manmohan Singh and the other Narendra Modi during travel.

He began by saying how the journalists and the media personnel accompanied the two prime ministers during their trips abroad. For the former he described how anyone and everyone would be included depending upon his or her closeness to the inner circle. He described the choicest food and the most expensive alcoholic drinks that flowed like water during the time the former prime minister travelled. He described how when a journalist would enter his room after checking in, an expensive bottle of black label would be waiting for him alongside with a note ‘with best compliments’ from the external ministry.

The two prime ministers have vastly different working styles, he shared. Manmohan Singh would work at the most half a day and for the rest half they would leave for sight seeing and even visiting nightclubs and tourist spots, all expenses paid for by the ministry, the matter being kept discreet.

A press room would be set up with the most exotic foods from around the world being made available and again expensive alcoholic drinks would be available for the asking. He said many of the journalists would pick up bottles and carry them to their room to be given as gifts later.

When the journey would end, they would be given a bottle of black label scotch as a parting gift along with many other freebies. The ostentation and gluttony reached its peak during the second term of Manmohan Singh, he added saying most of them vied to be as close to the Lutyens media as they could so that they could be included in each trip.

While describing the working style of Narendra Modi during foreign trips, his tone changed. “With him we had to work long hours with few gaps in between. There were no pleasure trips but two programs scheduled daily and the schedules were so tightly packed, people had to hurry to not miss their meals. And the alcoholic drinks were replaced with tea, coffee and some biscuits.”

“And what did the journalists write during Manmohan Singh’s time?” Someone next to me in the audience asked.

“They had to protect Manmohan Singh and project him as a good and honest man. And, well, they had a second agenda too, that was discreet.” A woman who identified herself as a journalist in the audience said they all would go on such trips too for another reason. “We had to sing paeans and praises for the queen.” The audience laughed out loud.

The audience heard him spellbound and laughed at his jokes, by now too common. Though what he said was common knowledge, it still was a revelation the way he described it in minute detail with all the ‘mirch masala’. The audience laughed at the comparison each time he made of the two styles of the prime ministers. After the debauchery of the time period spent with Manmohan Singh, it was very difficult for the journalists to adapt to the stoic discipline of Narendra Modi he added. “Everyone resented it and cursed the change.”

As the lecture ended and we were coming out a young woman from the audience asked the journalist, “Tell me something. Where was your conscience all this while?”

Two different leaders. Two different time periods. Two men with the responsibility of leading a nation. Yet the two periods are marked by sharp differences, sound unreal and Kafkaesque as different as night and day, one that we have survived. While the former bought off the voice of the fourth pillar by silencing them with greed, the other has distanced itself from it and is hated.

What the journalist said was that when the very conscience of our nation slept, why only a single individual should be asked to bear the responsibility for the collective failure of our conscience to speak up? But is that a valid line of argument?

Why did our conscience disappear for ten years? Did we kill it like Abhimanyu of Mahabharata encircling and forgetting what makes us human is our inner voice? Why did we as a nation, didn’t raise our voice against injustice after injustice, wrongs that we saw committed in front of our eyes? Why is so our collective voice weak and doesn’t make itself heard like a rule of law society should?

Sometime ago I was watching a film, the trial of a mass murderer for crimes against humanity. To every question asked by the judge of the international court, he had only one answer. “I was only following my orders. I had no choice to do otherwise.” After listening to him patiently, the judge pronounced him guilty and stated, “Each one of us is an agent of his or her own free will and has the choice to say ‘no’ when we face evil. If you didn’t, that was your choice and still was an act of free will.”

The choice to not support, to say ‘no’ to a wrong, to any evil is the last of the freedom as described by Victor Frankel in his book ‘Man’s search for meaning’. We can exercise it even when we may have reached the point where death is certain and life has stopped to offer any meaning. This freedom belongs to us as an individual, not to the collective and we must guard it. That is where we as people have to take it away from those who stole it from us.

When we lost our land, our religion, our culture to invaders, we also lost this last of the freedom to express. We also lost the awareness that we are its only keepers. We have come close to losing it again when we give power to those who think everything about Indians is up for sale including its conscience. Isn’t it time we retrieve it? Will the future generations then ask us why did we sell our nation for something as cheap as a bottle of whiskey?