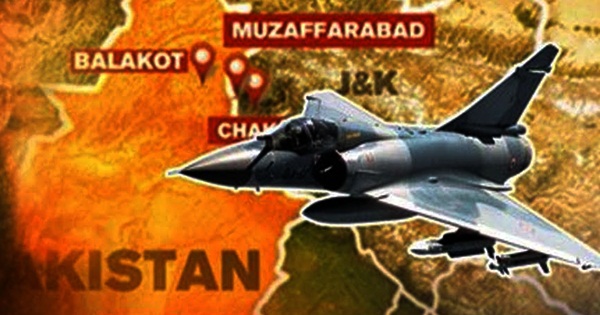 It was a journalist from a national newspaper, “Don’t you think Modi’s saying we will enter their homes and avenge the terror, rather a cheap war talk before the elections?”

When I said I don’t agree she seemed disappointed, “So many intellectuals and thought leaders have already agreed with me.”

Thanking her that she considers me an intellectual I asked her, “Churchill had once said to his people that we will fight them everywhere, with all our will… Every leader in history has given speech like that when his nation has been attacked.”

“But Churchill was talking before a war. Also his language was erudite and suave, not so cheap.”

“Are our forces being attacked by terrorists not a war? What about Churchill calling us ‘sub humans’? Would you call that erudite?”

“Two wrongs don’t make one right,” she added and asked if I still support his rhetoric.

“Today, the whole nation is angry. He only reflects that anger of people. Gandhi would have asked Indians to turn the other cheek. Our Prime Minister is not a leader built in that mold.”

“Do we need a leader who talks like that? Most of us feel a leader should show restraint in his speech more so when we are both nuclear powers.” She added and hung up.

It is for the first time when India has a Prime Minister who perhaps gets viscerally angry when the nation is attacked and is not ashamed to show it. India has taken attacks and humiliations over the years but no leader ever spoke in the kind of language Modi does and has expressed rage telling his people to fight back except perhaps Bose.

Nehru turned out to be a pathetic caricature of a man when attacked by China and even wrote a letter to Kennedy which is shameful if we see it for its language. I don’t remember Indira Gandhi mentioning or getting viscerally angry with the genocide in Bangladesh or India attacked by Pakistan. All so far were pacifists in the Nehruvian mold unable to hit back. Manmohan Singh’s not being angry despite being humiliated was legendary.

Modi’s anger, in sharp contrast to all of them, is raw and palpable and comes out like a lion’s roar. As many feel today, he leads an angry nation saying enough is enough and we won’t tolerate it anymore. Modi is speaking as a leader whose borders are being violated everyday. It is perhaps for the first time in India’s history that a leader is doing so. Having been bled with a thousand cuts, he says it is time for us to hit back. So, is the era of defensive Indian leaders turning the other cheek before the world finally over?

My school going daughter asked me the other day, “Would any of the twenty two odd leaders who have asked our Prime Miniser in a joint declaration not to politicize the recent event, attack the terrorist bases in Pakistan?” When I asked her what does she think she said no and that her friends feel so too and they wonder why no leader of India spoke in that language before. She said they felt a new sense of pride in their country like they had never felt before.

Is there a new pride in the children of India? Does this strike have a value for our nation? Will we see children growing up around us look up to leaders who say the nation should pre-empt enemies even before they enter our borders? Will it also make our children feel safe? These are hard questions for us as parents.

John Stuart Mill once said, “War is an ugly thing but not the ugliest of things. The decayed and degraded state of moral and patriotic feeling that nothing is worth war, is much worse. The person who has noting for which he is willing to fight, nothing which is more important than his personal safety, is a miserable creature and has no chance of being free unless made and kept so by men better than himself.” Isn’t that what has been the script of India so far and one we need to change forever as a nation?

The script of our country has been that of a lonely leader, surrounded by enemies, battling and fighting external and internal forces amidst heavy odds made more so by indifference of his people. Whether it was Prithviraj Chauhan or Shivaji or Maharana Pratap, the script in each case was the same. Isn’t it time that we, the people of India, understood what it means to be a mute spectator and not take a stand? For how long will we allow ourselves to be ruled over by a doubt that when the enemy is at the door and I have personal scores to settle with my neighbor which is the priority to settle first?

Modi perhaps is one of the loneliest leaders today and it is future historians who may need to assess that. Not only is he trying to erase the script of a nation and people mired in passivity, he has also promised to take them to a promised land of glory. The journey to the promised land goes through many a sacrifice and renunciation. Are we, the people of India, ready and willing to go with him or do some of us want our goodies first?

My daughter asked me, “When one is stressed at the end of the day, one turns to his family to unwind. Who does he go to when facing vitriolic attacks?”

“What are you referring to?” I asked.

“Kejriwal said he got Indian soldiers killed to win the next election. So did some others.”

I explained, “He considers his motherland the sole reason for living and considers India his family. He is a different type of leader than what we have had so far in our history.” She nodded her head and asked, “How does he feel with so many abuses and accusations hurled against him?”

Otto Rank, the famous psychiatrist, once said alienation and loneliness is a part of when a large group or a nation tries to create a new self definition and change its identity. Are we willing to change our self definition or script based on who we are, our ‘ahimsa’ and its passivity that many today think made us slaves for a thousand years? Are we willing to be still bound by our father of the nation’s words who said that we should allow our enemies to slaughter us as it might bring transformation in them? What would Gandhi have said to all the wars, if he were alive, that India has fought in its history to defend its borders from the Chinese, from Pakistan? To all the arms we bought? Against whom he would have launched his fasts then?

Sometimes it seems Modi is on a perpetual trial for every act, every word of his. Is it because with each act of his, the deep fissures and fault lines that lay hidden in our country are tumbling out and making us look at some of the hypocrisy we surrounded ourselves with? Is it our trial more than his this time? Will his trial one day remind us of the trials of history that put a nation’s conscience to trial too for a people trying to rise above their chains?

In the present scenario, Imran Khan has been painted as a man of peace while Modi is pitted against him as the aggressive war mongering maniac by some of the media and intellectuals. The strategy by the journalists and the intellectuals is a time tested one. Paint the average Indian as an aggressor so that he backs off feeling guilty, no matter how many cuts he has been given in the first place.

The anguish in Modi’s voice was very palpable when he said, ‘attack me, not the forces’. I wish the people of India try to understand this time what his feeling was all about and ask themselves whether the pain he feels is a pain of the whole nation too?