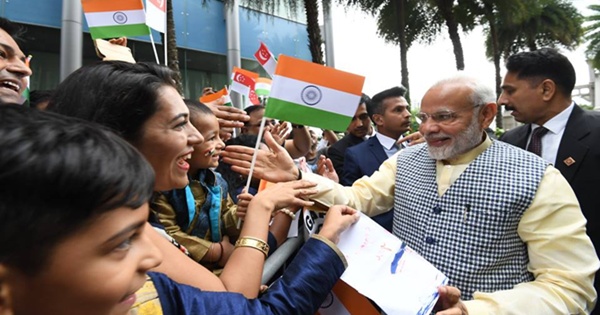 On 31st May, for the first time I was physically present to hear Prime Minister Modi live at an event. I passed an opportunity to be standing right where he would walk in and shake hands with people simply because I did not want to be that fan who screams like a besotted dumbo. The brain, the brain – use your brain said my brain. Go sedately and listen to his speech said the brain. And so I focussed on reaching on time for the registration, security check and finding the best seats in the gigantic hall at the iconic Marina Bay Sands which can seat over 2,000 people (though I hear some 4,500 people were present). My husband joined later after finishing his office meetings.

Some cultural programmes were staged while we waited for the PM. We texted friends to find out where they were sitting, we waved to people we recognized. Suddenly the screens in front began to show the place where Modi was greeting people after reaching Fullerton Hotel. Live! And there stood some of my friends. The audience in the hall erupted at the sight and went “Modi, Modi, Modi…” 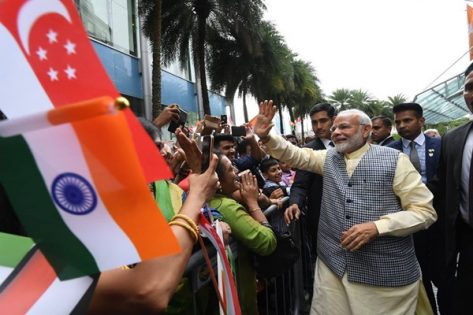 Still later when the PM arrived at Marina Bay Sands and began to come closer to our hall along with Singapore’s Prime Minister, even as every movement of his was telecast on our screens, the excitement began mounting all around me. We saw him going to different booths in an exhibition in the building and people cheered loudly. And then he finally entered our hall. OMGs it was like a movie star making an entry. I do not know if any Indian political leader including anyone from Gandhi or Nehru family has commanded this kind of euphoria, mania or whatever you call it even in a foreign country. [Subhash Chandra Bose is an exception going by the archival photos of the crowds he attracted in Singapore.] 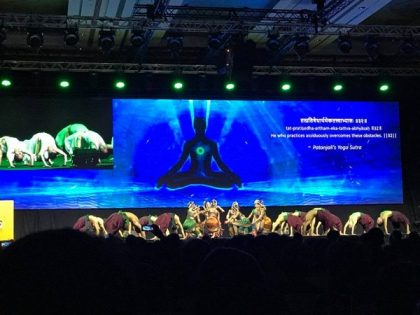 Next, Singapore’s Minister-in-charge of Trade Relations S. Iswaran came on stage to update us about all the business collaborations going on between Singapore and India. He told us that India has the world’s 3rd largest ecosystem for startups. A Singapore-India Incubation Programme will soon help Singapore start-ups break into the Indian market.

Three digital payment platforms RuPay, Bhim and SBI were launched by PM Modi in the presence of Dr Iswaran to a thunderous reception. 3 platforms which I wish had been launched right in those days when I struggled to send money to India. With these 3 Apps it will be a breeze to spend in India using Singapore dollar accounts or to send remittances.

Finally, the most awaited moment came when Dr Iswaran invited PM Modi to speak on the stage. It was a moment of total delirium all around me. Perfectly normal people in office-wear were chanting Modi, Modi or “Bharat Mata ki Jai” and even “Vande Mataram”. I looked all around to understand what this phenomenon was and then turned to my husband to see if he could decode it for me. But he was busy looking at his iphone to check on the results of the Kairana bypoll. “See how they have all ganged up against him,” he whispered. “BJP has lost to the combined might of the opposition there! 2019 will not be easy.”

India’s partnership with Singapore is growing stronger! Watch my speech at the community programme in Singapore.

India’s partnership with Singapore is growing stronger! Watch my speech at the community programme in Singapore.

But, he spoke in English which was a bit of a dampener because we all know his superb oratory in Hindi. But really, you have to give it to this man for being able to speak fluently without tripping, without getting confused in a language he must have learned so late in life. One might laugh at his pronunciation (after a while I felt as if I would start saying “nayver”, “praysence”, institusun, phreedom, breej, naytural, naval sheeps) but it is so much more appealing than a London educated colonized PM speaking in perfect English. How the hell does he reel off data like they are engraved in his mind? He spoke of the staggering pace of infrastructure development going on in India right now. Roads, railways airports, freight corridors, train station modernization, ports, manufacturing, energy generation, banking, social welfare. Hard data which cannot be faked. Here is a man whose every utterance somehow infuses Indians (even Indian-origin foreign citizens) with a little more energy, a little more confidence and makes them walk a little taller than before. I thought of the time when there was no Modi in the horizon. The hopelessness. The helplessness. When it seemed like termites were eating up India.

We’ve got a Prime Minister who motivates like no PM did before! I am remembering the speeches of Nehru, Indira Gandhi, Rajiv Gandhi but none of them made one feel like getting up immediately and doing something, anything for India! The hope and inspiration that Modi has given to millions of Indians worldwide cannot be quantified. We will not know how many industrialists decided to invest in India, how many people began to raise funds for India, how many decided to volunteer in India because of the hope that Modi represented – these are things which cannot be measured. Before Modi, Indians abroad did not feel this connected with India as they do today. 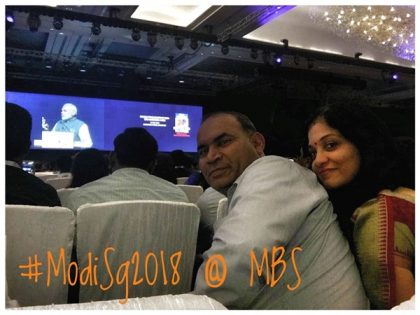 The author and her husband listening to PM Modi in Singapore. Image credit: Bhupesh Kurade

Yes, we need Modi to be elected back in 2019. I know the man focusses too much on development to the exclusion of everything else. I know there have been gaps in the implementation of promises. I know there are many who are upset with his silence and inaction on important matters. All it means to me is that we need to push him more, shake him hard and force him to hear us. We need him to appoint more ministers who are as good as Nitin Gadkari, Piyush Goel, Sushma Swaraj, Suresh Prabhu and others. But it has to be him. Him and no one else for PM for another term. Inspiration matters.