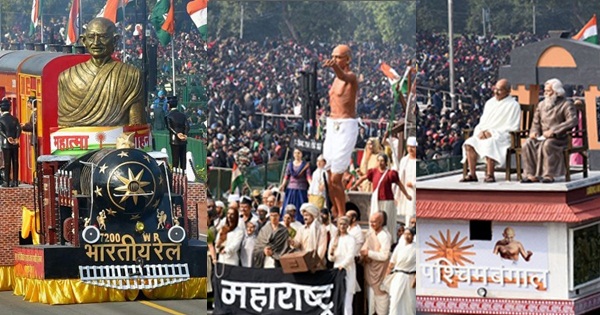 Who got India her freedom? Was it Gandhi? Was it Gandhi’s non-violence? What about the martyrdom and sacrifices of lakhs of our freedom fighters! The final big struggle for India’s freedom was led by Netaji Bose and the INA (Azad Hind Fauz). Revolt by Indian soldiers in Army and Navy as a result of INA Trials led the British ultimately leave India. British officials who signed and transferred power have revealed the truth not to mention documentary British archival proofs that credit Netaji Bose and the INA for India’s freedom.

So there was a grand military parade followed by exhibition of strategic weaponry – the military might of India at Rajpath. These include a display of the Main Battle Tank (MBT) T-90, American howitzers M777, and indigenously developed Akash weapons system. How did Gandhi’s non-violence ideology come into play here? It is an irony that the theme for the 70th Republic Day parade was dedicated to Mahatma Gandhi. A total of 22 tableaux exhibited the theme on the ‘life and ideals’ of Mahatma Gandhi. Of the 22 tableaux, 16 were represented by states and union territories and six by central government ministries and departments.

A false narrative that Gandhi got us freedom still rules the midset of the government and people alike. Maj Gen GD Bakshi had requested for a float dedicated to Netaji Bose and the INA to be displayed at the Republic Day Parade. Instead half the parade was full of Mahatma Gandhi’s tableux. How can there be a balance between military might displayed in the form of military parade and weaponry and non-violence displayed by the floats dedicated to Gandhi? 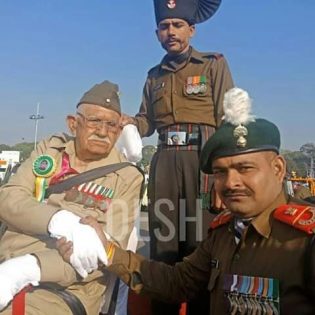 In this regard, Maj Gen Bakshi wrote on Facebook, “It took 4 Years of Pleading to get 4 INA boys on parade. We kept requesting for a Float for Netaji and the INA. It is a pity the Floats are all dedicated to Mahatma Gandhi. Half the parade was full of Mahatma Gandhi’s Tableaux. The Raj is still all powerful and brown babus will bend over backwards to please? We showcase our Military Might to our enemies to tell them not to mess with us. Then we undo it by the second half of the parade of tableaux saying- Go ahead kill our citizens. We are Gandhian we will turn the other cheek. With such enemies PACIFISM has serious perils.”

British archival data and Attlee’s statement prove Netaji and INA trials forced British to leave India. Why no tableaux for Netaji at the RD Parade and why all 22 tableaux dedicated to Gandhi? Clement Richard Attlee was the British Prime Minister from 1945 and 1951. It was he who signed off on the decision to grant Independence to India. And hence, India gained freedom on 15th August 1947. Clement Attlee visited India (Kolkata) in 1956. He stayed at the residence (Governor’s palace) of the then Governor of West Bengal and Chief Justice of the Calcutta High Court – Justice PB Chakraborthy. Maj Gen GD Bakshi gives a detailed account of the conversation between Attlee and Chakraborthy in his book BOSE: AN INDIAN SAMURAI (A Military Assessment of Netaji and the INA). Attlee had told Chakraborthy that the British left India primarily because of Netaji’s INA and the mutinies it triggered.

Justice PB Chakraborthy wrote a letter to the publisher of RC Majumdar’s book, A History of Bengal. In this letter, the Chief Justice wrote, “When I was acting Governor, Lord Attlee, who had given us independence by withdrawing British rule from India, spent two days in the Governor’s palace at Calcutta during his tour of India. At that time I had a prolonged discussion with him regarding the real factors that had led the British to quit India. My direct question to Attlee was that since Gandhi’s Quit India movement had tapered off quite some time ago and in 1947 no such new compelling situation had arisen that would necessitate a hasty British departure, why did they had to leave? In his reply Attlee cited several reasons, the principal among them being the erosion of loyalty to the British crown among the Indian army and Navy personnel as a result of the military activities of Netaji. Toward the end of our discussion I asked Attlee what was the extent of Gandhi’s influence upon the British decision to quit India. Hearing this question, Attlee’s lips became twisted in a sarcastic smile as he slowly chewed out the word, m-i-n-i-m-a-l!” When historical records prove Gandhi’s MINIMAL role in India’s freedom why all the praises on him? 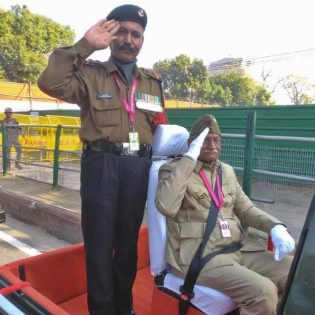 Maharashtra portrayed ‘Quit India movement’ in its tableau. Was the Quit India movement really successful? To quote Maj Gen GD Bakshi on this, “Gandhi’s Quit India movement was applied in fits and starts and not in a sustained manner and hence never built up sustained psychological pressure. Unfortunately the British very cleverly exploited the non-violent nature of his struggle. They were convinced it could never drive them out and hence they tacitly encouraged it and gave it a great build up in the radio and print media of that era. Bose was the only one who opposed Gandhijis non-violent strategy. A VERY DETAILED STUDY OF THE DOCUMENTS IN THE BRITISH TRANSFER OF POWER ARCHIVES NOW CLEARLY HIGHLIGHT THAT GANDHI’S 1942 QUIT INDIA MOVEMENT HAD FAILED DISMALLY AND IT WAS ONLY THE VIOLENT AFTERMATH OF THE INA TRIALS and the naval mutiny of 1946 that panicked the British high Command and FORCED them to leave in 1947. Nelson Mandela followed Mahatma Gandhi’s non-violent methods and South Africa got her freedom only in April 1994. That is what would have happened to us had Bose and the INA not sacrificed 26,000 men to liberate India. IT WAS SIMPLE MATHS – THERE WERE JUST 40,000 GORA TROOPS IN INDIA AND 25 LAKH COMBAT HARDENED INDIAN SOLDIERS OF THE BRITISH INDIAN ARMY. ANY MAJOR REVOLT WOULD HAVE FINISHED THE RAJ. THEY SAW THE WRITING ON THE WALL AND LEFT TAMELY. UNFORTUNATELY THEY HANDED OVER POWER TO CONFIRMED ANGLO-PHILES AND COLLABORATORS.”

To further quote GD Bakshi, “A great deal of British archival material is now available that clearly proves that the British left primarily because of the outrage in India caused by the INA trials and the British fear that widespread revolts would start in the Indian armed forces.”

Nonetheless, for the FIRST TIME after Independence, INA Veterans were part of the Republic Day Parade at the 70th Republic Day celebrations at Rajpath! This is a small tribute to Netaji Bose and the INA. Four INA veterans – Shri Bhagmal, Shri Lalti Ram, Shri Hira Singh and Shri Parmanand, aged between 95 to 110 years, were driven down Rajpath in open jeeps and escorted by the Indian Armed forces amid cheers, applause from the PM, dignitaries and the general public. 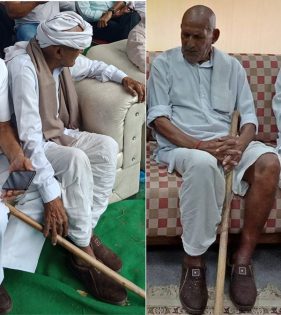 The proverb ‘something is better than nothing’ holds true here. Why did it take 72 long years for India to recognize the INA veterans? Why weren’t they brought to Rajpath earlier? As per the INA’s official history, the INA force had a total strength of 60,000. Of these, 26,000 soldiers died fighting in battle for the freedom of India. Why were the surviving INA veterans not inducted into the Indian Army after Independence? According to Maj Gen GD Bakshi, “The pity is that the Nehruvian dispensation treated these men as traitors. There is no memorial for the 26,000 martyrs. The INA veterans were not taken back into the Army (on Mountbatten’s advice) and denied their war time pensions.”

Why did Nehru Govt. term INA soldiers as traitors? Because they fought against the British crown? They were not even recognised as freedom fighters! Many INA veterans died in utter poverty. Majority of them had donated their wealth to the INA for India’s freedom. After Independence, with no wealth or recognition and no funds to educate their children, many did menial jobs while many of their family members committed suicide. INA veteran Laxmi Indira Panda, worked as Housemaid, cleaning utensils for a living in Odisha. She had joined INA in Burma. She was denied pension for freedom fighter by the Central Government. Though in later years very counted few INA Veterans including Laxmi were given pensions, that was too late. No media or the intelligentsia highlighted about their sacrifices and role. And our history textbooks do not glorify them at all.

The above questions still reverberate in many of our minds. Maj Gen GD Bakshi gives an answer to this, “A succession of court historians have tried to craft a narrative that India had obtained her freedom entirely by the soft power of ahimsa (non-violence) and Satyagraha; and that hard power had no role to play whatsoever.” 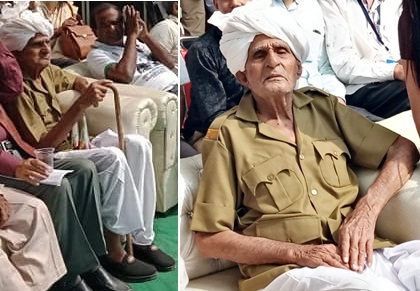 Maj Gen GD Bakshi along with few patriots and organizations have been working towards reviving the spirit of Netaji Bose and spreading awareness about Bose and the INA role in India’s Independence. Till date surviving INA veterans have not yet been honored on Republic Day or Independence Day. Recently Maj Gen GD Bakshi met Ajit Kumar Doval, IPS (Retd), PM, PPM, KC, former Indian intelligence and law enforcement officer and currently National Security Advisor to the Prime Minister of India. He appealed Doval to get the INA veterans on Republic Day Parade this year. Doval agreed and moved fast to get this organised on this Republic Day.

GD Bakshi has been selflessly working towards giving Netaji Bose and INA veterans their due recognition. His continuous efforts led the govt act swiftly in bringing surviving INA veterans to the Republic Day Parade. He wrote on his Facebook timeline on this, “I am feeling so relieved and blessed. What should have been done first thing in 1947 when we became ‘Free’. It has taken 72 years of fighting a deeply entrenched Nehruvian bureaucracy and anglophiles in the Armed forces and other hierarchies. Thanks indeed to The Prime Minister who Finally Gave the orders and to Two People who quietly worked behind the scenes to take this historic step – the NSA Shri Ajit Doval KC and the Present Army Chief Gen Bipin Rawat. We have finally freed ourselves from the Psychological shackles of slavery left behind. 26 Jan 2019 will be a historic day for us when the sacrifices of the INA are finally realised and we thank its surviving soldiers. It is a HISTORIC GESTURE and marks our republic coming of Age”

I repeat what I wrote in an earlier post – that the ardent nationalism of Netaji Bose is being revived. The nation now, though in a small scale, is acknowledging Netaji’s and the INA’s role in India’s Independence. When history textbooks get rewritten, glorifying Netaji and INA and given due recognition, true justice will be delivered. Jai Hind!