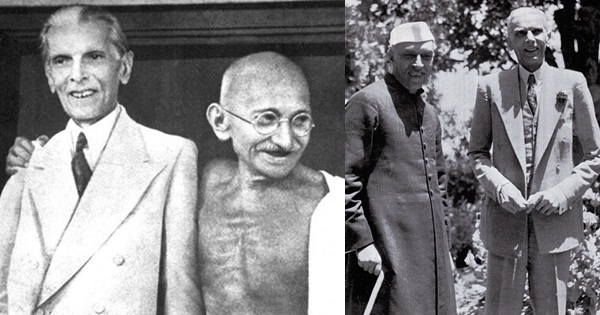 A bbc.com report titled ‘How Jinnah’s ideology shapes Pakistan’s identity’ mentions how ‘prior to the division of India in 1947, Hindus and Muslims had lived together across the country. But Jinnah described them as two separate nations’. ‘In 1940 in Lahore Muhammad Ali Jinnah, the man who founded Pakistan, gave a seminal speech setting out the need for a separate state for Muslims on the subcontinent saying, “Hindus and Muslims belong to two different religious philosophies, social customs and literary traditions. They neither intermarry nor eat together, and indeed they belong to two different civilisations which are based mainly on conflicting ideas and conceptions.” ‘This “Two Nation Theory”, as it came to be known, has become the official Pakistani narrative for the creation of the state and key to how Pakistan defines itself.’ The report also mentions how ‘Pakistan was perhaps the first country to be formed on the basis not of a common ethnicity or language, but religion. Yet at the same time it is not, and never has been, a theocracy.’

The book The Anatomy of Terrorism by Mahmood bin Muhammad describes Nehru having replied thus when asked about the vast majority of Muslims who remained in India, “We are not a communal state. The Muslims who have decided to stay in India are as much honourable citizens of the country as the members of the majority community. They cannot be victimized in the new situation for their actions and conduct before and at the time of partition. We cannot and must not live in the past.”

The people who created Pakistan stayed back in India because of India’s soft leadership, below is a conversation between Pandit Jawaharlal Nehru and an IAS probationer Shri Yuvraj Krishan in 1950:

Krishan (YK): Well Sir, those who have brought about partition have been left behind in partitioned India. The Muslim League declared that the Hindus and Muslims were two Nations and asked for partition because they feared the Muslims being a minority would suffer oppression and atrocities at the hands of the Hindu majority. Pakistan was to be their homeland where they could live in freedom from the tyranny of the Non-Muslim majority. But lo and behold! The vast majority of Muslims of UP, Bihar, Central provinces, Bombay etc. remained behind in India and did not migrate to the homeland Pakistan created for them. While we never accepted the two nation theory, we were driven to accept partition to avoid bloodshed and achieve Independence!

Prime Minister (PM) – We are not a communal state. The Muslims who have decided to stay in India are as much honourable citizens of the country as the members of the majority community. They cannot be victimized in the new situation for their actions and conduct before and at the time of partition. We cannot and must not live in the past.

YK : True Sir, but the immense suffering the people have undergone and the problems, only it has created new ones.

PM: You are too young to understand. The overwhelming majority of the Indian Muslims are politically backward and have been misled by the pernicious and poisonous propaganda of the Muslim league. So it will be wrong to treat the vast majority of Indian Muslims as being responsible for the ills of our country.

YK: True Sir, the vast majority had been misled by the two-nation theory. But this does not absolve the Muslim League leadership, they are the authors of partition and yet the majority of the leadership also stayed back in India. The Muslims of Pakistan, the West Punjab, the NWFP, Sindh and Baluchistan as such never wanted or asked for Pakistan, in fact they didn’t need to!

There was a pause and silence for a couple of minutes.

YK: The Raja of Mahamudabad, Begum Aizaz Rasul, the Raja of Pirpur, Maulana Hasrat Mohanti etc, from UP, Syed Hussain Imam from Bihar, M.Mohd.Ismail from Madras etc to name a few of the host of Muslim League leaders, have stayed back in India though they had actively worked for the creation of Pakistan as the homeland for the Indian Muslims. There is not an iota of justification for such leaders being allowed to stay in India after having got the country partitioned on the basis of the two-Nation theory. They ought to have gone to the homeland they asked for and obtained.

There was again a pause. PM Nehru’s face was flushed. After a brief silence, he resumed.

PM: We cannot abandon the nationalist Muslims who had fought and sacrificed for India’s independence.

YK: But the Congress had already abandoned the Khuda i Khidmatgars led by Frontier Gandhi!

PM: This was a most unfortunate decision forced on us by the geo-political realities!

YK: I’m not sure of the loyalty of the so-called Nationalist Muslims after the creation of Pakistan, Considering the mischievous and rabble rousing speeches of the National Muslim leaders those who were opposed to partition like Dr. Syed Mahmud, Maulana Hafizur Rahman of Jamiat-ul-ulema-e-Hind etc. at the Lucknow conference of Mussalman, Hind(Dec 1947).

PM: This is false, mischievous, a canard intended to defame and denigrate the Nationalist Muslims who have played a glorious role in India’s independence.

The face of the Prime Minister turned red in anger. He started puffing at his silver cigarette-holder.

At this point the questioner ‘had a very strong urge to recall the advice PM Nehru had given to the Kashmiri Pandits in 1945 at a meeting in Sopore in the Kashmir valley that if non-Muslims wanted to live in Kashmir they should join the National Conference which was overwhelmingly a Muslim party or bid good bye to the country (Kashmir)!’ But sensing the mood of the Prime Minister he was sullen and kept quiet.