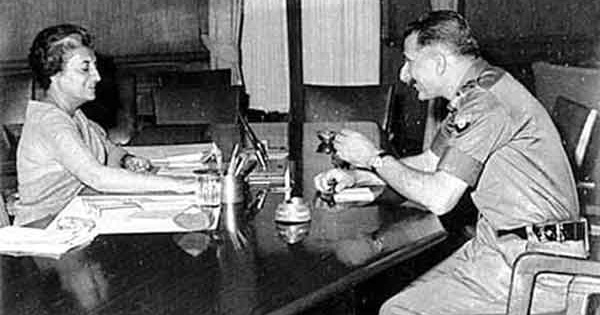 Indira Gandhi had been presented by her admirers as a world-class statesman, a staunch Nationalist and an iron woman but she was nothing of the sort. The Simla Pact with Pakistan (1972) proves the hollowness of such claims! Indira Gandhi was only an average politician. While she elicited praise from sections of Hindu Nationalists she is condemned by some seculars for her authoritarianism.

The highest watermark in her career was India’s victory in the 1971 war with Pakistan that led to the creation of Bangaladesh. Here the field operations were handled by service chiefs and were successful to the extent they were given a free hand. Indira Gandhi was given the easiest test in statesmanship at Simla but she failed miserably.

Indira Gandhi surrendered large tracts of Pakistani territory captured by the Indian Army in the western sector and released 93,000 prisoners of war in return for empty promises of good behaviour and friendship from Z. A. Bhutto, a sworn self declared enemy of India! Just compare it to what Sardar Patel would have extracted from Pakistan in such a situation! Consider what Bhutto himself would have settled for if he was in Indira’s position!

1. As soon as the Pakistani Armed forces surrendered in the Eastern front, Mrs. Indira Gandhi unilaterally declared peace in the Western front. And she withdrew all Indian forces that were heroically fighting deep into the enemy territories.

Twice before Pakistan fought wars against India and caused harm to the latter, but even though defeated, they were able to hold on to large territories in Kashmir due to the extreme generosity of Nehru at the cost of the Country. The stronger advancing forces of India were never allowed to free the occupied territories.

2. A total of 93000 Pakistani Jihadi soldiers were taken prisoners in the 1971 Indo-Pak War. It was not possible to free them completely overlooking the emotional aspect of the victorious Army and the people’s verdict and release the terrorists (they massacred 3 million Bengali Hindus) without maintenance of the protocol. It took 8 months to do the same. During this period the Pakistani soldiers were not kept like war prisoners but like Royal guests!

3. When Chief of Army Staff General Sam ManekShaw was visiting Pakistan, a Punjabi Muslim opened his turban from his head and placed it on the General’s feet. When asked why he did so he said both his sons were war prisoners.

4. On the first day of every month the Pakistani prisoners were paid a cheque equivalent to their salary. While this was going on, many logical and justified demands of our own soldiers were not met for years. It was only sometime ago that the Modi Government tried to solve most of these problems.

5. Not only that, so that the Pakistani soldiers can stay with their families during Eid festival, they were given an option to fly their families from Pakistan.

6. All wars end at a discussion table, and here its name was the Simla Agreement. In all such accords, the victorious side gets some advantages, like compensation, occupation of the strategically important points and a condition of no further attacks. But surprisingly here India never asked for any advantages and on the contrary, tried its best to satisfy Pakistan by agreeing to abide by all it’s demands!

All the territories conquered by India were returned unconditionally, but surprisingly the Indian territories occupied by Pakistan were not taken back! In return of the lives of the brave martyrs and the bearing of the huge price of war, only Indira Gandhi gained the title of a great world leader!

7. Indira Gandhi became very popular both at home and abroad. She used the opportunity to declare an emergency in the Country, banned the RSS and brought in the 42nd amendment of the Constitution. It means she thought more appeasement is necessary even after the Simla Agreement.

It was during this 42nd amendment that the word Secular was infiltrated into the Constitution. Of course Pandit Nehru wanted to add the word from the beginning, but it could not be done due to severe opposition from Baba Saheb Ambedkar who understood that there was a great chance of the word being misused. Because he completely understood the Congress Government’s shameless favouritism and appeasement towards the Muslims. He was always vehemently criticizing the policy.

He said, “where there is provision of democracy and freedom of religion, there is no requirement of Secularism separately.” And in actual, today in India justice, truth and democracy is continuously being raped by Secularism!

8. At about this time keeping the Indian Parliament in complete darkness, a secret order was passed to all the Chief Secretariats of all States and Union Territories. (Express letter No:26011/16 /71-10, Dated, New Delhi, the 29th November, 1971). Here it was stated that no more refugees from East Bengal will be given the citizenship of India if they come after the 25th of March, 1971. They will not be allowed to permanently settle in India and they will have to be pushed back at a suitable opportunity. From then all the refugees who were escaping from East Bengal to save their lives, families, properties and honours and getting citizenship in India were stopped from the same time.

9. Once East Bengal was liberated many people of the Country including some Awami League leaders requested Mrs. Indira Gandhi to annexe East Bengal to India. When refused they requested that the Indian Army be inducted at least till the law and order in the war zone is reestablished and all refugees are reinstalled back at their homes and properties. But she vehemently refused their proposal and the Indian soldiers were deinducted with a great hurry at the earliest opportunity.

10. Once East Bengal became free, the freedom fighters in Sind and Baluchistan also requested for Indian assistance in their fight for freedom against Pakistan. But Indira Gandhi immediately refused their requests!

11. Before the last Lok Sabha elections a serial was running in a Television Channel under the name Pradhan Mantri or Prime minister. There the stories of all the Prime ministers of the Country till date were being shown. Naturally Indira Gandhi was given the largest time slot. There were two new information available which explained the above mentioned mysterious incidents clearly.

The first one was that when the Awami League approached the Indian Government for assistance and cooperation in their freedom struggle, the Indian Prime minister made a condition that the independent Bangladesh Government would be bound to take back all its refugees. The second one was that the Indian Armed forces were specifically ordered to complete the whole operation in minimum possible time.

12. Garry J. Bass, the Professor of Politics and International Relationships in Princeton University in USA wrote a book, The Blood Telegram: Nixon, Kissinger and a Forgotten Genocide. J. Bass wrote in his book, “even before the freedom fight broke out in 1971 in erstwhile East Pakistan, the Pakistan Armed forces specifically targeted the Hindus and started a genocide against them in the true meaning of the term. More than a Million Hindus were murdered in cold blood even before the beginning of the war. Not only USA, even the Indian Government tried to hide the facts and suppress the news!”

Indira Gandhi wanted to solve the problem at a time and in a manner that would yield rich political dividends in the next Lok Sabha elections. So she delayed action until a few months before the elections. The Pak soldiers surrendered on the 16th of December 1971 at Dacca. They surrendered to the joint forces of the Indian Army and the Mukti Bahini. It was a historical moment of victory for both India and Bangladesh.

But Indira Gandhi’s lookout was something different. Her only target for some strange and unknown reason was to get back Sheikh Mujibur Rehman safely. She was ready to pay any amount for this! She herself told this to the RAW Chief at the time Ram Nath Rao! Mujibur Rehman had been convicted in the Pakistani court. He was awarded capital punishment, and would have been hanged.Indira was moved, she didn’t want to see Bangladesh helpless.

General Yahya Khan the President of Pakistan resigned following the insult of defeat. He called Bhutto from the USA and declared him as his successor. Bhutto immediately took a flight to Rawalpindi. On hearing of Bhutto’s return an emergency meeting was called by Indira Gandhi. Bhutto’s plane was supposed to land at Hithro airport for fuelling. Indira Gandhi wanted an Indian representative to meet with him there and ask him what was his plan about Mujibur Rehman.

The meeting was attended by Foreign Ministry adviser Durga Prasad Dhar, RAW Chief Ram Nath Rao, Principal Secretary P. N. Haskar and Foreign Secretary T. N. Mail. Muzaffar Hussain was the Chief Secretary of East Pakistan and he was taken as a prisoner of war by the Indian Army. At the time he was placed at the house of D. P. Dhar as a Royal guest of the Indian Government enjoying every luxury. His wife Laila was in London. The husband and wife were both close to the Indian embassy and they maintained communication through the said embassy. Shashank Bandyopadhyay the Indian ambassador was their medium of communication. So he used to have good relationship with both of them. Laila was the ex girlfriend of Bhutto. Indira Gandhi utilized the help of Laila in this case. She sent Laila to Hithro airport to speak to Bhutto on behalf of the Indian Government. Her only aim was to know what Bhutto thought about the fate of Mujibur Rehman. Shashank Bandyopadhyay asked Laila to find out what Bhutto thought about Mujibur Rehman.

After the meeting Bhutto pulled Laila close and whispered into her ear, “dear Laila, I know why you came here. Give my message to Indira Gandhi. Tell her I will free Mujibur Rehman. But I want something from her in return, and I will communicate to her later what I want!”

Direct Source for concluding part: India, Mujibur Rahman, Bangladesh Liberation & Pakistan: A Political Treatise (published in the US in 2011), Sashanka S. Banerjee. The author was posted as a diplomat in the Indian mission in London in 1971-72.