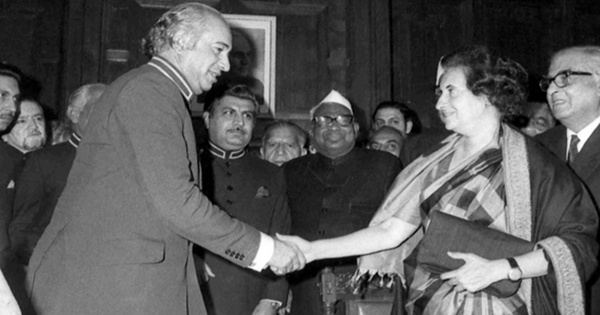 It was the 2nd of August, 1972. The 13 day long war between India and Pakistan ended 8 months back. The Simla Agreement was being signed on this day. As a result of the agreement India agreed to return 93000 Pakistani prisoners of war! All of them have been taken prisoners during the war in ’71 between the two countries.

But the decision was highly debated. Why didn’t the then Prime Minister Indira Gandhi (Maimuna Begum) ask for Pakistan occupied Kashmir to be returned against their freedom? The Kashmir problem would have been permanently solved. What was the reason she so readily agreed to free the Pak prisoners of war? What is the story behind the incident?

The mystery and the debate would have been solved if we knew it. But the story remained a secret. It was never brought to light. Now 46 years have passed from the war. But the mystery why the Pak prisoners of war have been released is yet to be solved.

Mrs. Indira Gandhi had been presented by her admirers as a world-class statesman, a staunch Nationalist and an iron woman but she was nothing of the sort. The Simla Pact with Pakistan (1972) proves the hollowness of such claims! Indira Gandhi was only an average politician. While she elicited praise from sections of Hindu Nationalists she is condemned by some seculars for her authoritarianism.

The highest watermark in her career was India’s victory in the 1971 war with Pakistan that led to the creation of Bangaladesh. Here the field operations were handled by service chiefs and were successful to the extent they were given a free hand. Indira Gandhi was given the easiest test in statesmanship at Simla but she failed miserably.

Indira Gandhi surrendered large tracts of Pakistani territory captured by the Indian Army in the western sector and released 93,000 prisoners of war in return for empty promises of good behaviour and friendship from Z. A. Bhutto, a sworn self declared enemy of India! Just compare it to what Sardar Patel would have extracted from Pakistan in such a situation! Consider what Bhutto himself would have settled for if he was in Indira’s position!

During her reign India exploded her first nuclear device and achieved a decisive military victory over Pakistan, leading to the dismemberment of our troublesome neighbour. However, her own contribution to either of these achievements was nothing while her handling of their fallout left much to be desired.

She shared Jawaharlal Nehru’s preference for dynastic rule, distaste for Hinduism and a deep faith in the gullibility of the ordinary people! During her reign dynastic politics became deeply entrenched, Hindu became a dirty word while corruption ceased to be so! Marxist activists were allowed to falsify Indian history on a massive scale and Bangladeshi infiltrators found backers at the highest level of the Government. Power for self, family and party (in this order) was the supreme objective. Corruption had always been with us but Indira Gandhi gave it acceptability!

In the case of the Bangladesh war she wanted to solve the problem at a time and in a manner that would yield rich political dividends in the next Lok Sabha elections. So she delayed action until a few months before the elections. The Pak soldiers surrendered on the 16th of December 1971 at Dacca. They surrendered to the joint forces of the Indian Army and the Mukti Bahini. It was a historical moment of victory for both India and Bangladesh.

But Indira Gandhi’s lookout was something different. Her only target for some strange and unknown reason was to get back Sheikh Mujibur Rehman safely. She was ready to pay any amount for this! She herself told this to the RAW Chief at the time Ram Nath Rao! Mujibur Rehman had been convicted in the Pakistani court. He was awarded capital punishment, and would have been hanged.Indira was moved, she didn’t want to see Bangladesh helpless.

General Yahya Khan the President of Pakistan resigned following the insult of defeat. He called Bhutto from the USA and declared him as his successor. Bhutto immediately took a flight to Rawalpindi. On hearing of Bhutto’s return an emergency meeting was called by Indira Gandhi. Bhutto’s plane was supposed to land at Hithro airport for fuelling. Indira Gandhi wanted an Indian representative to meet with him there and ask him what was his plan about Mujibur Rehman.

The meeting was attended by Foreign Ministry adviser Durga Prasad Dhar, RAW Chief Ram Nath Rao, Principal Secretary P. N. Haskar and Foreign Secretary T. N. Mail. Muzaffar Hussain was the Chief Secretary of East Pakistan and he was taken as a prisoner of war by the Indian Army. At the time he was placed at the house of D. P. Dhar as a Royal guest of the Indian Government enjoying every luxury. His wife Laila was in London. The husband and wife were both close to the Indian embassy and they maintained communication through the said embassy. Shashank Bandyopadhyay the Indian ambassador was their medium of communication. So he used to have good relationship with both of them. Laila was the ex girlfriend of Bhutto. Indira Gandhi utilized the help of Laila in this case. She sent Laila to Hithro airport to speak to Bhutto on behalf of the Indian Government. Her only aim was to know what Bhutto thought about the fate of Mujibur Rehman. Shashank Bandyopadhyay asked Laila to find out what Bhutto thought about Mujibur Rehman.

After the meeting Bhutto pulled Laila close and whispered into her ear, “dear Laila, I know why you came here. Give my message to Indira Gandhi. Tell her I will free Mujibur Rehman. But I want something from her in return, and I will communicate to her later what I want!”

India is still paying continuously for the unsolved problem of Kashmir!

Direct Source: India, Mujibur Rahman, Bangladesh Liberation & Pakistan: A Political Treatise (published in the US in 2011), Sashanka S. Banerjee. The author was posted as a diplomat in the Indian mission in London in 1971-72.