Echoing of Pakistan Zindabad Slogan Regular in India. Why Govt. Not Serious? 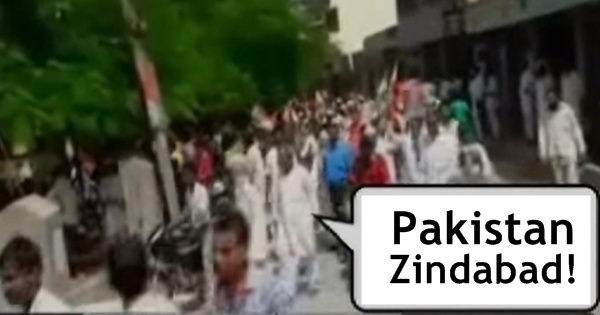 Pakistan Zindabad! This slogan has been raised time and again across different places in India. Without fail. No fear of law. This is their patriotism, their open love for Pakistan, as Indian citizens, in the Indian soil. The media is silent. No ‘award wapsi’ gang speaks about this. Bollywood remains ‘mum’ in this; they speak out on other issues that are anti-Indian. No debates on this in leading TV news channels. What about the honorable Supreme Court? Look at their silence on urgent issues related to Kashmiri Pandits and anti-Indians who openly raise pro-Pakistani slogans! And the government is silent. Why?

Do we fear these anti-nationals, who fearlessly support Pakistan from India? Eat, drink, and earn in India, but praise and love for Pakistan! No true Indian can do this or tolerate this. Yet we watch as silent spectators, as we cannot take the law in our hands. We wait for the law to take action.

Recently a video on Kashmiri youth pelting stones on security forces and shouting slogans of ‘Pakistan Zindabad’ on Bakri Eid went viral on social media. Is this India?

According to a greaterkashmir.com February 2018 report, Muhammad Akbar Lone, National Conference legislator shouted pro-Pakistan slogans in the Legislative Assembly. Why? Because, shouting pro-Pakistan slogans, he was countering BJP MLAs who were shouting anti-Pakistan slogans. Was that justified? How can an Indian citizen, that too an MLA, chant slogans against his country? The report quoted Akbar Lone, “I am a Muslim first. My sentiments were hurt when they (BJP MLAs) were shouting “Pakistan Murdabad” slogans. I couldn’t control my emotions and raised Pakistan Zindabad slogans.”

An April 2017 report by Zee News carried news about a CRPF jawan, who was heckled in Srinagar by stone pelters, revealing Kashmiri youth shouting `Pakistan Zindabad` slogans to torture them. According to the report, the ‘jawan said he was not scared of stone-pelters in Kashmir but was wary of a situation which could spin out of control’. According to the CRPF jawan, reported by Zee News, “they (stone-pelters) were shouting slogans like `Pakistan Zindabad`, `Go India, Go back’”. Couldn’t the govt take strong actions against the stone pelters and anti-nationals?

In an election campaign for the Ghaziabad Municipal Corporation in Ghaziabad, Pakistan Zindabad slogans have been raised. A very recent incident (24th November 2017)! According to a Dainik Jagran report, at Shaheednagar locality under Shahibabdad police station, campaigners in support of a localite contesting for Parshad shouted slogans of Pakistan Zindabad. A video of the campaign was shot and it soon went viral. Police swarmed into action, checking the authenticity of the video, and accordingly geared up to nab the anti-nationals. No strict action has been taken yet.

There are several instances of Pakistan Zindabad slogan raised in India at different places. Many instances are not reported by the secular media. Who isn’t aware of the provocative slogans like Pakistan Zindabad raised at JNU in a February 2016 event? This issue did hit the headlines and was the talk of the media and citizens for quite long. And then silence held sway.

In August 2015, AIMIM leaders and Owaisi supporters in Basti, UP raised Pakistan Zindabad slogans. The viral news reached Pakistan, leading Pakistan Cricket Board (PCB) to write a letter to BCCI. What was the subject matter of the letter? A permission for making this UP’s district their home venue for all future international matches! According to FirstPost Faking News report, PCB chief hadn’t ‘seen this patriotism even in Pakistanis’!!

In July 2016, a video showing 50-60 student activists under the banner of Popular Front of India (PFI) marching through Patna streets from Patna Science College to Kargil Chowk shouted pro-Pakistani slogans. The banner carried the image of Hyderabad MP and President of the All India Majlish-e-Ittehadul Muslimin (AIMIM) Assaduddin Owaisi. PFI is said to be a part of Student Islamic Movement of India (SIMI), which was banned in India after the US 9/11 attack. The youth group took out the procession sympathizing Zakir Naik and Owaisi (he had said few days ago before this incident that he would not say Bharat Mata Ki Jai). Is arresting only one youth in Bihar over Pakistan Zindabad slogan justified?

The aforementioned is only a counted few incidents reported. Shouting of pro Pakistani slogans is a regular affair in Kashmir. It is the time the government awakes from its slumber and takes stern action against anti-nationals. The country cannot be put at stake! Such incidences will only increase if the government doesn’t control it with an iron hand.

Is the Ban on Private Cryptocurrencies by the Indian Govt Justified?