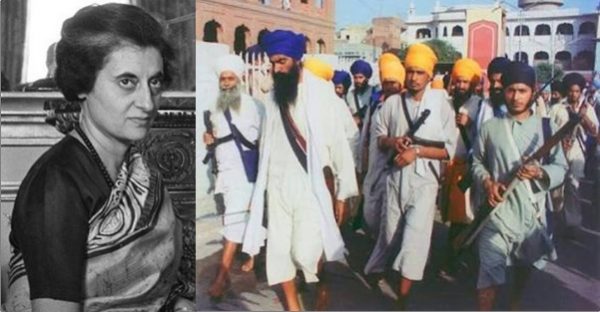 What Khalistanis are demanding is different land for their own country by separating Amritsar from India. Now Sikhs’ main places of worship are Patna Sahib (Bihar), Hajur Sahib (Maharashtra), Ponta Sahib (Himachal Pradesh), Anandpur Sahib (Punjab), Kankhal (Haridwar), Hem-kund Sahib (Uttrakhand) and so on. In case they make Amritsar as separate country then Sikhs need to apply for visa to visit these places which they are free to visit now. No Sikh wants that.

Now Sikhs are principally Hindus. Sikhs themselves say that all the 10 Sikh Gurus are descendants of Lord Ram’s sons Luv and Kush. Guru Gobind Singh Ji made Sikhs fight against Mughals (led by Aurangzeb). It was basically an army to protect Hindus from conversions, execution and rapes by Muslims.

Aurangzeb used to ask Hindus on sword – “Are you Hindu or Muslim”. If they said “Hindu” then he killed them brutally and took the women of his family as sex slaves. If he said that he was Muslim or expressed interest to accept Islam, Aurangzeb spared them after feeding cow meat.

Guru Gobind Singh Ji announced “I will create an army whom you will not have to ask whether he’s a Hindu or Muslim. You will know by their appearance.” So, the Sikhs were formed as Hindu Army. Guru Gobind Singh ji gave slogans like Chidiya naal je baaz ladawa taa Gobind Singh naam dharawa, Sawa lakh te ek ladaun, tabhe Gobind Singh naam rakhaon.  Very soon, in Punjab many Punjabi Hindu masses got inspired by the teachings of Guru Gobind Singh Ji. It became culture among Hindu families that elder son would become Sikh and join the army to protect nation.

Indira Gandhi wanted to make India a communist country and rule as a dictator without election. Same was done by USSR to North Korea. North Korean communist ruler Kim Jong -Un is their stooge is an open secret to the world now.  Same they wanted to do with India. USSR’s main agenda was to take the dictator of communist country they make in their control. It would facilitate them to apply their policies in that country.

To start with, they poisoned PM Lal Bahadur Shastri ji because he was involved in making the nation a strong democracy. There was uproar that he was murdered (1965 Tashkent Russia) yet the Congress never let the post-mortem of Shastri ji happen. It makes their role look more suspicious. Shastri ji’s family firmly believed that it was murder.

Smt. Indira Gandhi imposed Emergency in 1975. It was her effort of converting India into a communist country and rule as a dictator forever without fear of election. During Lenin and Stalin communist rule in USSR, more than 3 crore Russians were killed. During Mao Zedong’s rule in China, over 10 crore Chinese people were sacrificed towards the building of a communist nation (Cultural revolution-China).

It is also mentioned in some speeches by Dr. Subramaniam Swamy that India adopted Russian model of economy (communist way). He was one of the main persons who was travelling and telling the world  about Indira Gandhi’s dictatorship in India from 1975-1977 during emergency. Smt Indira Gandhi became afraid of her reputation getting tarnished globally for what she was doing in India. This pressurized her to end the Emergency.
Dr. Subramaniam Swamy recently got award from P.M. Modi for his great work in abolishing 21 months long Emergency (dictatorship) and saving democracy in India else it would have been a communist (dictator) country. It is also mentioned by P.M. Modi in his speech praising Dr. Swamy. Click below to see P.M. Modi telling how Emergency ended. P.M. Modi also played a great role then.

Communism in order to destroy a democracy, acts like water. It mixes with anything that can break a nation’s govt, law and main religion in that country (i.e. to destroy Hindu religion in India as they destroyed Buddhism in China). Communists got mixed in Jehadi terrorists, Khalistan movement, reservation politics, and so on.

Khalistan agenda came in picture broadly in the year 1979 for the first time to divide Hindus and Sikhs. Jarnail Singh started to kill Hindus and real Sikh teachers/saints. Khalistani agenda was actually created by Pakistani jihadis because they strongly desired to separate Sikhs from Hindus after 1971 Indo-Pak war defeat. Their belief was that Sikhs are brutal and till the time they were in army with Hindus it was difficult to defeat them. This topic is commonly discussed in Pakistan news channels.

So, Pakistan supplied Khalistanis with advance weapons and training as is done in Naxal movement now. Jarnail Singh Bhindranwale (Khalistan founder terrorist) became even stronger than the then Punjab govt. 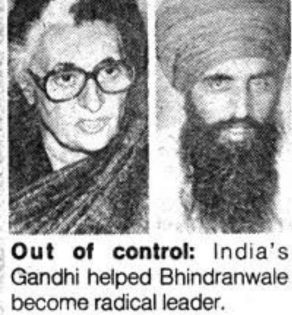 USSR desperately wanted to break Hinduism. The Russians pressurized Smt. Indira Gandhi to make tanks and let army enter inside Golden Temple (as also mentioned by Dr. Swamy during his speeches).  They destroyed Golden Temple which could have been saved. Smt. Indira Gandhi’s Sikh guards killed her for that. 10,000 innocent Sikhs were slaughtered and women raped systematically in Delhi as revenge by the Congress. After her assassination, Rajeev Gandhi released a statement that “when a big tree falls, the land nearby shakes”.

Now the fact is that many fully trained Punjabi speaking Pakistani Muslim Commandos in Sikh attire have joined Khalistan movement in India and abroad. They mock anything Nationalist or Hindu. In Punjab, five Muslim trained terrorists were caught in Sikh outfit and it was in news.

World news completely exposing Khalistani and Muslim extremists’ deep connection in Canada is in video below:

The hipocracy of Khalistan movement is that they are keeping deep silence on mass kidnappings, rapes and forced conversions of Sikh girls in Nankana-Sahib Pakistan where Sikhs were majority some time back but now struggling to exist. Khalistanis are not demanding Nankana-Sahib (Birth place of first Sikh guru, Baba Nanak) but are demanding Amritsar instead where Sikhs are living like brothers and sisters.

See in the video below how minor Sikh girls are getting kidnapped, raped and converted in masses in Nankana-Sahib Pakistan. WION covered it:

Now whole Congress and Khalistan terrorists are trying hard to prove since 1984 that ‘1984 riots were not Congress killing 10,000 Sikhs for Indira’s revenge but it was Hindu-Sikh riots. This is as per their agenda to divide Sikhs and Hindus.