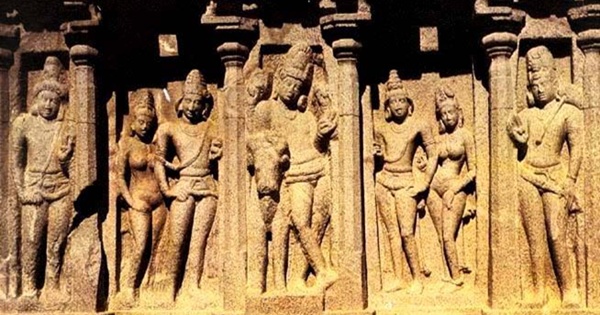 Skandasisya, the founder of Pallava Dynasty descended from Ashwathama. Ashwathama was a Brahmana from Bharadvaja Gotra, son of Guru Dronacharya and a Commander-In-Chief of the Kuru army. Pallavas inscribed their lineage in Royakotta Copper plates and other inscriptions. As per Sangam text Manimekalai, Ashwathama married Naga girl Manipallavam from Pahalava tribe. Pahalava tribe is described numerous times in Ithihasas and Puranas.

Pallava in Sanskrit means branch or twig. Their territories were named after their epithet Tondai as Tondaimandalam. They gained prominence in South after the eclipse of Satvahanas another Brahmin Dynasty of Deccan whom Pallava served as feudatories. Skandasisya is identified as Skandavarman in Rayakotta inscriptions and Varman is the royal title of Pallavas. He also went by the name of Virakurcha in Velurpalayam plates.

Prashasti that eulogize Indian rulers from 1st Millennium CE elevates the son of Ashwathama to the level of partial incarnation of Vishnu. Ilam Tariyan in Perumbanatruppadi and Rajendra Chola in Thiruvalangadu copper plates scribed that they are distant cousins of Pallavas and claimed their ancestry with Ikshvaku in the line of Sri Rama.

Pallavas ruled Andhra desha, Northern Tamil Nadu and Southern Karnataka, Ceylon. They were followers of Brahmanism who performed Ashwamedha Yajna and Vedic rites. They were however tolerant of other faiths. Mahendravarman a Shaiva patronized Jain shrines.

Pahladpur inscription is the record of Pallavas in the north. The Nagi legend of the Scythians is connected with Puranas and Tamil literature. It has been pointed out that Pahalava indicates the name of a tribe and Pallava that of a ruling family.

Simhavishnu coming to power saw revival of Pallava territories taking usurping Kanchi from Cholas. Through his naval expeditions he subdued Indo-china and Ceylon. He stuck a blow to Kalabhras – Buddhist and Jain invaders. Once again Pallavas ended up losing their territories this time around to Pulikesin II under Mahendravarman. His son Narasimhavarman sworn to avenge the death of his father, wrests back the territories from Pulikesin II and ends up defeating both Cholas and Cheras.

At the accession of Narasimhavarman II he exchanged ambassadors with China and offered rulers assistance in their war against Arabs to uphold Arya Dharma. Post his period Pallavas were under serious decline facing rusty blows from Pandyas, Cholas and Chalukyas. Under Aparajitha Pallava reign in India came to an end when Aditya Chola broke the yoke of Pallava’s overlords. Nevertheless Pallavas had exalted by Rajendra Chola. Later Khymer empire who were descents of Pallavas acted as vassal empire of Rajendra Chola.

Xuanzang a 7th century Chinese Traveller described the University of Kanchi as an important seat of education and a national centre for Sanskrit. He noted 100 Buddhist monasteries and 80 temples in Kanchi. He reported that the Agriculture was thriving and people were happy. Economy under Pallavas was socialist where the land ownership were under the kingdom.

Pallavas were polyglot. They patronized literatures in Tamil, Sanskrit, Telugu and architectures. Aalwars and Nayanars flourished under Pallava reign. Dandini and Vastyayana two erudite scholars flourished the Pallavas. Dandini composed Ramayana which if read in reverse narrates Mahabharata. Vastyayana was an Acharya of Kanchi University.

Pallavas were great martial artists and Military leaders. Bodhi Dharma an Aryan Prince traveled to China and spread Indian form of martial arts which came to be known as Shoalin.

Mahendravarman apart from being a great ruler was also a poet, musician and an architect of temples. He composed Mattavilas in Sanskrit and Vichitrachita an imaginative literature of Ancient times.

They were instrumental in transition from rock-cut architecture to stone temples. Shore temple, various other temples carved our if granite monoliths and the Varaha cave were designated as UNESCO world Heritage site in 1984 at Mamallapuram.

Other sources such as Periplus attests a Parthian Kingdom comprising South West India to as far as Thane in Bombay. So did Strabo who traveled to Bharat. Arrian a Greek historian describes Pahalava sovereignty as extending from Indus to the Nerbuda. Mahabharata correlates their tribe to be situated in Tapti region. Some of their tribe also migrated to Persia.

Geography of Ancient Bharat and the Significance of Rivers and Mantras