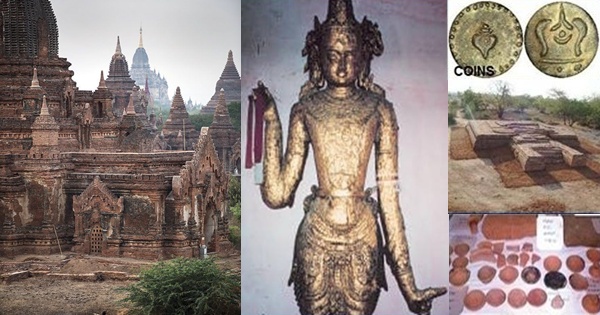 Vishnupur was one of the earliest Aryan settlements in ancient Burma. Also known as BeikthanoMyo, Vishnu is “Beikthano” and “Myo” is city in modern Burmese. Vishnupur served as the cultural and political capital of Burma between 200BC-600AD. Little of this ancient city exists today because of natural decay and human depredations.

Archaeologists found ruins of structures of pillared halls, rectangular and circular base of temple like structures, monasteries; also home to numerous wooden structures which couldn’t survive. The city was enclosed by four tall brick walls, covering an area of over 2.8 square kilometers.

Indian legacy elements in Burma at present: Sanskrit & Pali elements in the vocabulary of the local languages; lunar-solar calendar, adoption of Dharmashastra and Manu-Samhita in administrative and legal framework; the Harivamsa, the Ramayan, the Mahabharat, and the Puranas are the principal sources of inspiration for local literature.

Abundance of burial urns containing ashes and bones of cremated human bodies are found; this particular exclusive Vedic practice leaves no doubt that the dwellers of this city were Aryans. Other 12 such walled cities have also been excavated so far, Sri Ksetra, Binnaka, Halin, Hastinapur/Sankissapur, Arimardanapur are important.

From prehistoric time, the vast fertile plains of Irawadi river of Burma attracted various races. Kshatriya (Aryan) adventurers from India were the first group to give a civilization to this land. Waves of Aryan migration before the Christian era (BCE) gave birth to several dynasties all across. Indians of other class: priests, traders, artists, engineers, sculptors, scientists, astrologers also followed.

Not mere religion and culture, it was a large-scale transportation of Indian civilization in all its form, systems of philosophy, institution of kingship both Hindu and Buddhist, customary law, mythology, literature, art, music, urban planning, building technology, astronomy, astrology, writing system, calendar, medicine, agriculture, irrigation system etc. In the beginning they were true Indian states but with the passing of time through reaction with the local needs they developed accordingly their own genius and taste, although the family resemblance never lost that they owed to their common origin India.

The land route of migration for North-Indian adventurers was always through Manipur and also from Manipur itself. Voyages from Odisha and Andhra colonised the delta of Irawadi. From thereon Aryans also penetrated further east founding independent kingdoms. Earliest Aryan settlement is not known yet, however certainly before the Christian era, before their arrival the land was thinly populated by primitive tribal groups. Aryan settlements finally enabled the natives to communicate and deal with outside world; enriching intellectual patrimony of humanity.

The term ‘Burma’ is derived from Kshatriya title Varma or Barma, also known as Brahmmadesh. From 1300 AD, Kshatriyas began to lose their separate identity and gradually became ingredients of today’s population but not without leaving traces. Such was the force of the penetration of Kshatriyas that its legacy still persist: Sanskrit & Pali elements in the vocabulary of the local languages; the lunar-solar calendar, adoption of Dharmashastra and Manu-Samhita in their administrative and legal framework. The Harivamsa, the Ramayan, the Mahabharat, and the Puranas are the principal sources of inspiration for local literature.

Traditional Burmese marriage is conducted by a Brahmin chanting Sanskrit mantras. Funerals are typically cremation. Traditions of kingship coronation ceremonies are Hindu not Buddhist. Burma was the theater of revolutionary changes; without India its past would be almost unknown.

Somnath Singha has keen interest on Indian History. He is continuously involved in historical studies and research. One of his goals is to trace the origin of the Bishnupriya Manipuri race and migration of Aryans beyond South Asia.