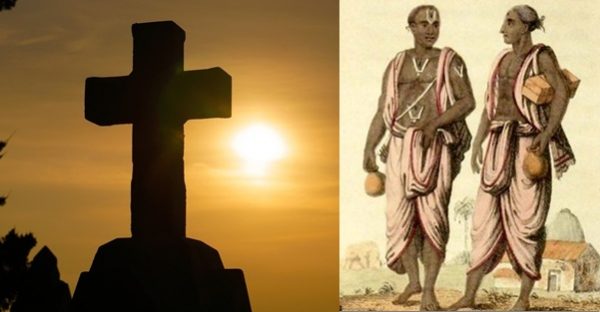 What Karunanidhi “dished out to (the Brahmins) through propaganda was worse than what the Nazi propagandists dished out to the Jews.” Some discussants have taken exception to my equating the Dravidianist anti-Brahmin propaganda with the Nazi anti-Semitic propaganda. Some have rhetorically asked as to how many Brahmins were sent to the gas chambers.

My comparison is perfectly valid for the following reasons:

1. Anti-Brahminism espoused by the Dravidianists and Anti-Semitism espoused by the Nazis were derived from the same source: Christianity. The Bible taught hatred against the Jews and the Nazis merely repeated what had been preached in the churches for centuries. There was no anti-Brahminism in India until the missionaries simultaneously introduced it across India in the 19th century.

The Dravidianists, just like their counterparts in Maharashtra and Punjab, were simply reading off a script the missionaries had written. Christianity is a religion on hate. It lacks any good teaching. It can only thrive by setting up an external enemy, who is sometimes the Jew, sometimes the Native American, sometimes the Roma, and sometimes the Brahmin.

The second reason was the active and heartless connivance of the Christians of numerous European countries (not just Germany) in rounding up and sending the Jews to the gas chambers.

The third reason was the industrial might which the Nazis had acquired which made the deportations and genocides possible.

Dravidianists had the same intent as the Nazis. They actively disenfranchised the Brahmins. They wanted to expulse or exterminate the Brahmins. However, two factors prevented them from fulfilling their wish. First, they lacked the industrial might the Nazis possessed. So, they couldn’t round up, deport, and exterminate the Brahmins. Second – and this is more important, anti-Brahminism was a new phenomenon in Tamilnadu (and India). It hadn’t penetrated deep into the minds of the Tamils as anti-Semitism had penetrated the minds of the Christians of Europe. So, the Dravidianists didn’t get the same level of active connivance from their electorate as the Nazis had.

4. Now, by no means do I exculpate the non-Brahmins of Tamilnadu. They unscrupulously supported the Dravidianists out of greed and for ephemeral selfish gains (e.g., reservation). None of these non-Brahmin castes would’ve wanted their own sons and daughters targeted the way the Brahmins were. Yet, they gleefully endorsed the anti-Brahmin propaganda.

There were certainly many good non-Brahmins but mostly they failed to raise their voice against the vicious hatred spread against the Brahmins. The entire Dravidianist propaganda was aimed at disenfranchising Brahmin men and coveting their women. This is precisely why I have no respect for those Tamil Brahmin women who married Tamil non-Brahmins. Those women were unscrupulous opportunists lacking self-worth and a modicum of dignity. Contrast this with the Jewish or Roma women, who, for the most part, stood by their men folk.

However, Dravidianist anti-Brahminism, although derived from Christianity, was infused into a Hindu society. So, a mere eradication of Christianity wouldn’t eradicate it. If any, once the Brahmins are extinct, it would be directed at the next caste. All the anti-Malayalee, anti-Telugu, anti-North Indian, anti-Hindi prejudices you see in Tamilnadu are manifestations of Dravidianist anti-Brahminism.

This is what makes Dravidianist anti-Brahminism very dangerous. It is a disease the hosts mistakenly think is a sign of good health.

Karunanidhi Is Dead! Should We Eulogize the Dead Man?