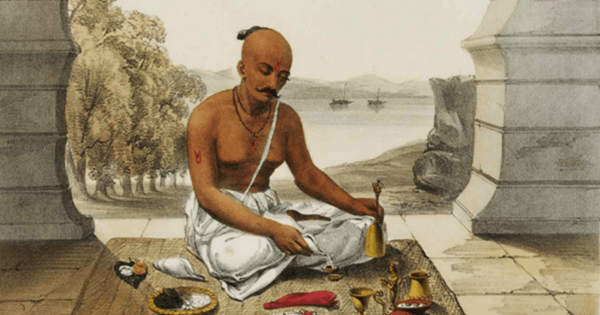 Common people in the west know hardly anything about India. But one thing they all know: India has an ‘inhuman’ caste system, which is an important feature of their religion, Hinduism. Most also ‘know’ that Brahmins are the highest caste, which oppresses the lower castes, and worst off are the untouchables.

I learnt this already in primary school, but knew nothing at that time about the concentration camps of Nazi Germany only a few years earlier or about the atrocities of slavery or colonialism. Yet the Indian caste system with Brahmins as villains was part of the curriculum in Bavarian schools in the early 1960s, and it still is today: some time ago I asked three young Germans in Rishikesh what they associate with Hinduism. Their prompt reply was, “caste system”.  Surely, they also had learnt that it was most inhuman. In all likelihood, all over the world school children are taught about the ‘inhuman’ caste system. Why?

There is likely an agenda behind it.

Yes, the caste system exists, and untouchables, too. And it exists all over the world. Curiously, ‘caste’ is Portuguese for class. It is not even an Indian term. The ancient Vedas mention four varnas – Brahmins, Kshatryas, Vaishyas and Sudras, which form the body of society, like the head, arms, thighs and feet form the body of a human being. It is a beautiful analogy which implies that all parts are important. True, the head will be given more respect, but will you ignore your feet? Not everyone is made for intellectual work, fortunately, because a society without farmers, traders, workers won’t be possible. All have their role to play. And in future lives, there are likely to be role reversals.

Varna was not hereditary originally. It depended on one’s predominant guna (quality of character) and one’s profession. The job of Brahmins was specifically to memorise the Vedas and preserve them absolute correctly for future generation. They had to have predominately satwa (pure) guna and had to stick to many more rules for purity than any other caste.

Brahmins were the guardians of the purity of the Vedas. So it is understandable that they would not touch those who for example remove the dead bodies of animals or clean the sewers, though a society needs people, who do these jobs, too. In the west, people also wouldn’t shake hands with them. But no issue is made out of it.

Due to their satwa guna, Brahmins were least likely to be abusive to other groups in society. Usually it is the group which considers itself socially just above another group, which looks down on those lower. This trait is there in all societies, but it is true, that in India, unfortunately over time, the four varnas were inherited by birth. There are today many Brahmins, Kshatriyas, Vaishyas, Sudras, who do not follow their dharma any longer and therefore should not consider themselves as belonging to their inherited varna.

But why is the structure of the society in India constantly decried, when nobody accuses for example the nobility, the highest ‘caste’ in the west, that it does not mingle with workers and won’t live in their neighbourhood?

Why is nobody upset that the British allowed only ‘whites’ into the club of Madikeri town in Karnataka and probably all over the country, as an old Indian gentleman told me? If I remember right, he said that the sign at the club read, “Dogs and Indians not allowed”.

Why is nobody upset that the agriculture policy of the British Colonialists starved some 25 MILLION Indians to death? 25 million men, women and children slowly dying because they had nothing to eat in a country that was one of the richest before the British took over… There are terrible pictures on the net of Indians only being skin and bones, barely alive.

Why is nobody upset that the British, after slavery was abolished, sent indented labour from India all over the world in cramped boats, where a big number died during the journey already (and were spared the torture in the sugarcane estates)?

Why nobody talks about what the Muslim invasions did to Hindus and especially to Brahmins? How cruel they were? How many Hindus were killed or made slaves? How many Hindu women committed mass suicide by jumping into fire so that they won’t fall into the hands of the Muslim troops?

Nowadays, due to ISIS we can well imagine what happened then, yet the Leftists and even ‘respectable’ British Parliamentarians are not concerned with all this. They are concerned with the ‘most inhuman caste system’ of India. It can be safely assumed that the colonial masters tried to drive a wedge between the castes by ‘fixing’ the former fluidity of varnas in their census from 1871 onwards. And today, their democratic successors, though without political power in India, try to drive a wedge with the help of manipulative media and even parliamentary legislation in their own country.

My point is: what Brahmins did by segregating from others or even snubbing others is negligible in comparison what Christian colonialists and Muslim invaders did.

So why are the so-called atrocities of the caste-system so hyped? The reason may well be to divert the attention from those who actually should feel guilty what they did and still do to India. It’s not the Brahmins. Many of them suffer today, mainly due to reservation and, though poor in many cases, by being excluded from benefits which are given to religious minorities or lower castes.

But this is not the only reason why the caste system and Brahmins are being bashed worldwide. Another important agenda is to shame Brahmins, to make them feel guilty about their forefathers and to make them reluctant to follow their original Dharma of learning and teaching the Vedas. The goal is to make Vedic knowledge disappear in India, because it poses a danger for Christianity and Islam. It can easily challenge their so called “revealed truths”. Vedic knowledge makes sense and is therefore the greatest obstacles for Christianity and Islam to expand over the whole world.

Unfortunately, a lot of Vedic texts are already lost. The former Shankaracharya of Kanchipuram, Sri Chandrashekarendra Saraswati, says in his book The Vedas that out of 1180 Shakas, into which Veda Vyasa divided the 4 Vedas some 5000 years ago, only eight are still in use. (Just wondering: would a search in England, Germany and other countries rediscover some of this treasure?)

It is about time to stop this Brahmin bashing and stop portraying the Indian caste system as the worst that has ever befallen humanity. It sounds so fake, especially, when ISIS gets neutral treatment by just mentioning facts, like, “ISIL burns 19 Yazidi women to death in iron cages because they refused to have sex with fighters” without any emotional colour or condemnation.

Some time ago, I saw an old Brahmin couple in a temple in south India. They had dignity, but were very thin. When Prasad (sacred food) was distributed, they were in the queue before me. Later I saw that they joined the queue again…. It was in all likelihood due to poverty.

Brahmins don’t need to feel guilty about their forefathers. They can be proud of them, because it is only thanks to them that India is the only country that has preserved its precious, ancient wisdom at least partly. Yet others should indeed feel guilty, but those others are brazen and won’t. They rather vitiate the atmosphere with unjustified hatred for Hinduism and anti-Brahmanism.

This article was first published at the author’s personal blog – mariawirthblog.wordpress.com.