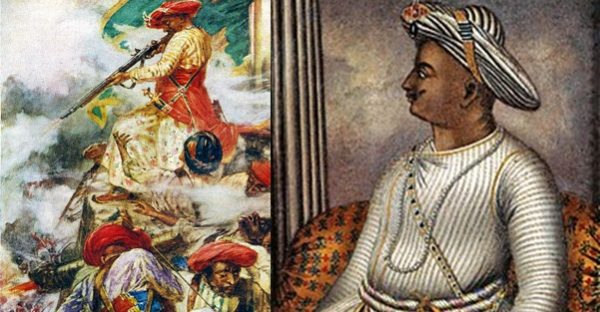 Indian History has glorified Tipu Sultan to such an extent that the very pronouncement of his name instills praise and honor. This is what we have been taught in our History books. This is what we have learnt while growing up. He is everyone’s icon. His birth anniversary is celebrated with honor across the country.

But there is another side to his story. We have been taught wrong History. No, he isn’t everyone’s icon. The wrongs he had done to the natives of India cannot be absolved. Do you know Tipu Sultan, the great ruler of Mysore killed thousands of Hindus, forcefully converted them to Islam and razed many Hindu temples to the ground? There are hundreds of reasons that prove Tipu Sultan as one of the biggest enemies of Maa Bharti.

Here is an exact excerpt from HISTORY OF LEGAL BATTLE AGAINST THE T.V. SERIAL – The Sword of Tipu Sultan by Madhavrao D. Pathak, Advocate.

The passages from the Mysore Gazetteer are as follows:

a. “The reversion of Mangalore to the possession of Tipu was signalized by the forcible circumcision of many thousands of Indian Christians and their deportation to Seringapatam. A revolt in Coorg next year led to the same treatment of the greater part of the inhabitants the occasion being marked by Tipu’s assumption of the tide of Badshah. All Brahman endowments were at this period resumed.”

b. “In January 1788 Tipu descended to Malabar, and remained there several months arranging for its effective administration and the reformation of its people, calling upon them either to give up their sinful practices or be honoured with Islam. He also ordered the destruction of Calicut and the erection of a new fortress of the name of Furruckku (Feroke), and then marched to Coimbatore in the monsoon. He also now began to lay claim on the tide of Paighambar, or apostle, on the ground of his religious successes, and symptoms of incipient madness, it is said, appeared.

From Coimbatore he visited Dindigul, and meditated, it appears, the conquest of Travancore. Laying waste with fire and sword the territories of refractory palegars, he returned to Seringapatam, and devoted four months to a classification of Sayyids and Sheks in his army to distinct brigades, leaving for the time being the Patans and Moghuls to be intermixed with the Hindus. A simultaneous rebellion occurred now in Coorg and Malabar, and the Sultan, passing through Coorg to quiet it, entered Malabar.

Large parties of the Nairs were surrounded and offered the alternative of death or circumcision. The Nair Raja of Cherkal, who had voluntarily submitted, was received and dismissed with distinction, but immediately after, on a false charge of conspiracy, was killed in a skirmish, his corpse being treated with every insult. Over 8,000 temples were also desecrated, their roofs of gold, silver and copper and the treasures buried under the idols amounting to many lakhs, being treated as royal plunder. Before leaving Malabar, Tipu visited Cannanore, where the daughter of the Beebee was betrothed to one of his sons. He also divided the country of Malabar into districts, each of which had three officers, charged respectively with the duties of collecting the revenue, numbering the productive trees, and seizing and giving religious instructions to Nairs.

His orders were, that ‘every being in the district, without distinction, should be honoured with Islam; that the houses of such as fled to avoid that honour should be burned; that they should be traced to their lurking places, and that all means of truth and falsehood, fraud or force, should be employed’ to effect their universal conversion.”

c. “…On the handle of the sword presented by him to Marquess Wellesly was the following inscription:

My victorious sabre is lightning for the destruction of the unbelievers. Haider, the Lord of Faith, is victorious for my advantage. And moreover, he destroyed the wicked race who were unbelievers. Praise be to him, who is the Lord of the Worlds! Thou art our Lord, support us against the people who are unbelievers. He to whom the Lord giveth victory prevails over all (mankind). Oh Lord, make him victorious, who promoteth the faith of Muhammad. Confound him, who refuseth the faith of Muhammad; and withhold us from those who are so inclined. The Lord is predominant over his own works. Victory and conquest are from the Almighty. Bring happy tidings, Oh Muhammad, to the faithful; for God is the kind protector and is the most merciful of the merciful. If God assists thee, thou will prosper. May the Lord God assist thee, Oh Muhammad, with mighty victory.”

“On some gold medals, also found in the palace, the following legend, in Persian, was seen on one side: “Of God the bestower of blessings and the other, victory and conquest are from the Almighty”. Apparently they were carved in commemoration of some victory probably after the war of 1780. The following is a translation of an inscription on the stone found at Seringapatam, which was to have been set up in a conspicuous place in the fort:

“Oh Almighty God! dispose the whole body of infidels! Scatter their tribe, cause their feet to stagger! Overthrow their councils, change their state, destroy their very root! Cause death to be near them, cut off from them the means of sustenance! Shorten their days! Be their bodies the constant object of their cares (i.e. infest them with diseases), deprive their eyes of sight, make black their faces (i.e. bring shame).”