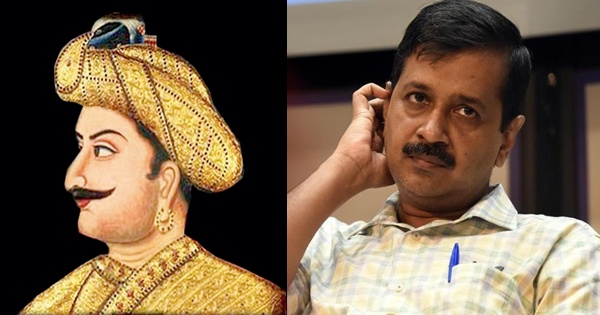 It is an insult to the brave freedom fighters of our country by Delhi Chief Minister and AAP supremo Arvind Kejriwal. He unveiled a portrait of the barbaric Tipu Sultan in the Delhi Assembly on Republic Day holding him in the same regard as our freedom fighters. Tipu’s was one of the 70 portraits, which included Subhas Chandra Bose, Bhagat Singh, Birsa Munda, and other freedom fighters. How can Tipu Sultan be equal with the brave sons of the soil who sacrificed their lives for the freedom of Mother India? Is this justified?

There are hundreds of reasons that prove Tipu Sultan as one of the biggest enemies of Maa Bharti. I have written several articles on these. Let me point out again:

Tipu Sultan destroyed 99.9% of the temples during his military operations. Thali, Thiruvannur, Varackal, Puthur, Govindapuram, Thalikkunnu and other important temples in the town of Kozhikode as well as those nearby were completely destroyed by Tipu Sultan. The devastation caused by Tipu Sultan to the ancient and holy temples of Keraladheeswaram, Thrikkandiyoor and Thriprangatu in Vettum region was terrible.

According to the Malabar Gazetteer by Charles Alexander Innes, the famous and ancient Thirunavaya Temple, known throughout the country as an ancient teaching-centre of the Vedas, revered by the devotees of Vishnu from Tamil Nadu, and existing before the advent of Christ, was also plundered and destroyed by Tipu’s army. William Logan wrote in the Malabar Manual: After dismantling and destroying the idol, Tipu converted the Thrikkavu Temple into an ammunition depot in Ponnani.

Tipu Sultan plundered and destroyed Kotikkunnu, Thrithala, Panniyoor and other family temples of the Zamorin (Hindu monarch of Kozhikode). The famous Sukapuram Temple was also desecrated. Damage done to the Perumparampu Temple and Maranelira Temple of Azhvancherry Thamprakkal (titular head of all Namboodiri Brahmins) in Edappadu, can be seen even today. Vengari Temple and Thrikkulam Temple in Eranadu, Azhinjillam Temple in Ramanattukara, Indyannur Temple, Mannur Temple and many other temples were defiled and damaged extensively during the military regime.

Mass Conversion of Hindus to Islam

Govinda Pillai says in his famous book, History of Literature, “During Malayalam Era 965 corresponding to 1789- 90, Tipu Sultan crossed over to Malabar with an army of uncivilised barbarians….He abducted hundreds of people and forcibly circumcised and converted them to Islam – an act which was considered by them as more than death.”

A small army of 2000 Nairs of Kadathanadu resisted the invasion of the huge army of Tipu Sultan from a fortress in Kuttipuram for a few weeks. They were reduced to starvation and death. Tipu Sultan entered the fort and offered to spare their lives, provided they accepted conversion to Islam. The unfortunate lot of 2000 Nairs were then forced to eat beef after being converted to Islamic faith, at the end of usual religious ritual of mass circumcision. All the members of one branch of Parappanad Royal Family were forcibly converted to Muhammadan faith except for one or two who escaped from the clutches of Tipu Sultan’s army. Similarly, one Thiruppad belonging to Nilamboor Royal Family was also forcibly abducted and converted to Islam. Thereafter, it was reported that further conversions of Hindus were attempted through those converts. In the end, when the Kolathiri Raja surrendered and paid tribute, Tipu Sultan got him treacherously killed without any specific reason, dragged his dead body tied to the feet of an elephant through the streets, and finally hanged him from a tree-top to show his Islamic contempt for Hindu Rajas.

Elankulam Kunjan Pillai has recorded the situation in Malabar as follows: “Kozhikode was then a centre of Brahmins. There were around 7000 Namboodiri houses of which more than 2000 houses were destroyed by Tipu Sultan in Kozhikode alone. Sultan did not spare even children and women. Menfolk escaped to forests and neighbouring principalities. Mappilas increased many fold (due to forcible conversion). During the military regime of Tipu Sultan, Hindus were forcibly circumcised and converted to Muhammadan faith. As a result the number of Nairs and Brahmins declined substantially.”

This is only a partial list of the mass conversion and killing of Hindus.

M.A. Gopal Rao, a Mysorean, stated in one of his articles: ‘In a deliberately designed taxation scheme, the religious prejudice of Tipu Sultan became quite clear. His co- religionists, Muslims, were exempted from house tax, commodity tax and also the levy on other items of household use. Those who were converted to Muhammadanism, were also given similar tax exemptions. He had even made provisions for the education of their children.’

No Hindus in Administration

Tipu Sultan discontinued the practice of appointing Hindus in different administrative and military jobs as practised by his father, Hyder Ali Khan, in the past. He had deep hatred towards all non-Muslims. During the entire period of sixteen years of his regime, Purnaiyya was the only Hindu who had adorned the post of Dewan or minister under Tipu Sultan. In 1797 (two years before his death) among the 65 senior Government posts, not even a single Hindu was retained. All the Mustadirs were also Muslims. In 1789, when the Nizam of Hyderabad and other Muslim rulers decided that only Muslims would be appointed henceforth in all Government posts, Tipu Sultan also adopted the same policy in his Mysore State. Just because they were Muslims, even those who were illiterate and inefficient, were also appointed to important Government posts.

Change of Names of Places

Tipu Sultan could not even tolerate the Hindu names of places. Therefore, Mangalapuri (Mangalore) was changed to Jalalabad, Cannanore (Kanwapuram) to Kusanabad, Bepur (Vaippura) to Sultanpatanam or Faruqui, Mysore to Nazarabad, Dharwar to Quarshed-Sawad, Gooty to Faiz-Hissar, Ratnagiri to Mustafabad, Dindigul to Khaliqabad, and Calicut (Kozhikode) to Islamabad. It was after the death of Tipu Sultan that the local people reverted to old names.

My question is the same again. Is Kejriwal’s glorifying of Tipu Sultan in line with our freedom fighters justified?