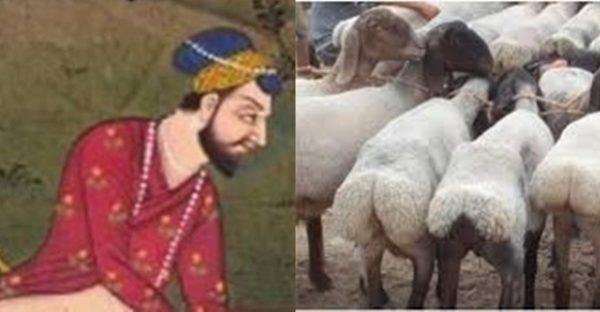 While communist historians and other liberals paint India as a dark and unlettered continent released from darkness by benevolent Islamic invaders the truth is absolute opposite. The Mughals were presented to the populace as benevolent, tolerant and refined folks while the truth now coming out about bestiality is shocking. A normal person would find it disturbing that references in Mughal history relating to this type of a mental disorder that makes a person do such acts. It is not a religious issue. Luckily for India some of the commentators and poets have documented these shenanigans for posterity to deflate the pomposity associated with the Mughal Court!!!

One of the prime examples is Jafar Zatalli a poet and commentator of the court of the son of Aurangzeb. A very colourful personality Jafar Zatalli is known for his abusive poems and brusque comments on the moral shenanigans of people of the Mughal court. The shameless of the personal behavior of the Mughals has been portrayed in Gandunama – The Memoirs of Homosexual.

Almost nothing is known of Zatalli’s life, except that he came from a good family in Narnaul, a small town not far from Delhi in modern day Haryana. His original name was Mir Muhammad Ja’far. Zatalli means ‘babbler of nonsense’. He christened himself with this self-mocking pen name called Zatalli. A person called Sayyid Atal Narnauli may have been his elder brother. His date of birth is not known, but can be determined tentatively as 1658. He put together his poetry and prose in perhaps 1685-6. Whatever he wrote later might not have been collected in his lifetime. The earliest known manuscript of his works dates from 1791/92. Zatalli became a writer during the reign of Aurangzeb. He shared a love-hate relationship with the Mughal emperor. Besides criticizing him, and also depicting the socio political issues of his times, he also spoke well and wrote good about him. When Aurangzeb was alive, he did not get enough fodder for his writings. After Aurangzeb’s death, which was followed by transition and turmoil in the Mughal Empire, Zattali wrote profusely about the failures of the subsequent rulers and criticized them without faltering.

Jaffar was one of the most prominent literary figures of his times. His uninhibited love for words made him renowned far and wide. He was the first Urdu satirist, the first Urdu humorist, and the first to use obscene and bawdy language in his prose and verse. Zatalli wrote a number of books that chronicled Aurangzeb’s Deccan campaigns and the war of succession among his sons. His crowning glory was Gandunama – The Memoirs of Homosexual.

He also wrote an elegy on Aurangzeb’s death. In the realm of poetry, he rejected all other genres of poetic expression popular at the time (such as the nazm and ghazal, which were usually used for romantic expression), preferring to compose free-verse in his own critical style. He was so popular and eloquent that Prince Azam, Aurangzeb’s son, lamented, “If only he had not been such a zatal, he could have been shora-ul-mulk (poet of the land).”

Jaffar Zatalli and his works are never dismissed as small or ugly. He is the Insulter, one of the greats of 17th century South Asian literature. In Urdu poetry, we have never really had someone like him since, someone who could so wantonly take on temporal rulers.

At some time or the other, perhaps in his middle life, he was employed at the court of Kam Bakhsh, fourth son of Aurangzeb. He seems to have been dismissed some time later when he composed a satire on the prince accusing the prince of having sex with a goat!! The Muslim Question: Understanding Islam and Indian History by Raziuddin Aquil finds mention of many anecdotes on Jaffar Zatalli. He writes,

‘None can surpass Zatalli in crudeness and in his carefree knitting together of phrases from backgrounds as diverse as theological and virtuous Arabic, polished and deceptive Persian, and rustic and direct Hindustani. … It is important to keep in mind that Jafar Zatalli was not an ordinary, frustrated public intellectual of the bazaar with nothing else to do. Nor was he a regular hoodlum loafing around the streets and passing comments on pedestrians. Also, his writing is not that of an ordinary soldier who maintained a diary in crude language… In the opinion of an early biographer, but for his nasty cracks, his literary abilities were of the level of a malik-usshuara (poet-laureate).  From time to time, he was employed in the service of some influential Mughal princes. For instance, he was for some time in the army of Aurangzeb’s son, Kam Bakhsh, which was engaged in Mughal campaigns in the Deccan.’ 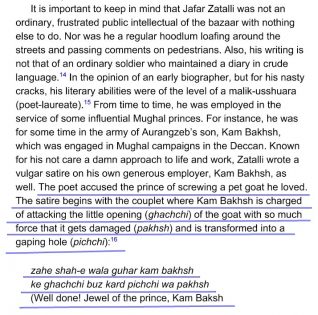 Snapshot from the book ‘The Muslim Question: Understanding Islam and Indian History’ by Raziuddin Aquil

‘Known for his not care a damn approach to life and work, Zatalli wrote a vulgar satire on his own generous employer, Kam Bakhsh, as well. The poet accused the prince of screwing a pet goat he loved. The satire begins with the couplet where Kam Bakhsh is charged of attacking the little opening (ghachchi) of the goat with no much force that it gets damaged (pakhsh) and is transformed into a gaping hole (pichchi):

(Well done! Jewel of the prince, Kam Baksh  The little opening of the goat irruptured into a gaping  hole.)’

‘Note the poet’s deployment of phrases in the radii Oast words of the couplet), which highlight the contradictory qualities of the prince: bakhsh (generosity and forgiveness) counterpoised with paldish (beastly suppression and disfigurement). Further down in the verses, Zatalli becomes more explicit and declares that the prince’s repeated penetration (`ghusera ghuseri’, shoving and thrusting) causes the goat (called Manohar) to begin silently moaning in pain.’ 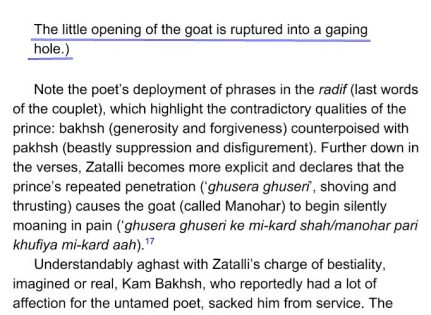 Excerpt from the book ‘The Muslim Question: Understanding Islam and Indian History’ by Raziuddin Aquil

Furthermore in the words of Raziuddin Aquil from the same book, ‘Understandably aghast with Zatalli’s charge of bestiality, imagined or real, Kam Baksh, who reportedly had a lot of affection for the untamed poet, sacked him from service’. Before this, he was employed at the court of Muhammad A’zam, Aurangzeb’s eldest son. He did not shy away from ridiculing Mughal emperors. He wrote:

Any revelation that Mughal emperor was homosexual had serious consequences. According to Mir in his tazkira Nikat ush-Shu’ara, when Zatalli was presented before Muhammad A’zam, he composed the following verse in praise of the prince:

Was engraved on the brilliant seal

The point in the she’r is that a secret and most potent name of Allah is called isme a’zam, (The Greatest Name); traditionally, the Prophet Solomon possessed the ism-e a’zam. According to Mir, the prince suitably rewarded Zatalli, but if personal references in his “Unedited Court Journal” are to be believed, he was a thriftless person and would have been soon parted from the prince’s bounty. Zatalli died in 1713, most probably executed at the order of Farrukh Siyar (r. 1712-1719), the ruling Mughal king for whose coronation Zatalli had composed a scurrilous sikkah. It went as follows:

He struck his coin on grains of wheat

And on coarse pulses, and peas:

Farrukh Siyar, that garrotter of a king.

He lamented the cruelties and pettiness of the Mughal Court. He was not afraid of speaking truth to power. Even better, he was not above cursing the powerful either. He mocked Khan-e-Jahan, one of the nobles of Aurangzeb’s court, with the verses:

You frittered away your treasure, nothing came from your hand,/ What the hell could you pluck at Sansi?/ Spit in your beard, your face damned and cursed.

So wretched, so abject, have you no shame? / In every home they curse you and spit at you, / Spit in your beard, your face damned and cursed.

You presented your back to the Jats, you had no shame / For your beard even. Now go, put on a woman’s loose skirt / Spit in your beard, your face damned and cursed.

(Courtesy: a translation from an essay by Shamsur Rehman Faruqi)

Referring to royal mistresses in Emperor Farrukhsiyar’s time, Jaffar remarked that they were compared to the moon but more closely resembled the buttocks of a buffalo. The story goes that Jaffar paid for his insults with his life—garrotted to death on the orders of Emperor Farrukhsiyar, whom he mocked as well, although evidence of this is weak.

In the words of Raziuddin Aquil, ‘….Zatalli was not taken seriously by literary purists, especially when Urdu literature was coming to be identified as a form of adab itself, his consistent pointing to the violations of Mughal norms by the upholders led to serious consequences. Zatalli was killed following the emperor Fermi&  Siyar’s order in 1713, ostensibly for commenting on the ruler’s brutal method of eliminating rivals and opponents  by strangling them to death using a leather belt (tasma), that is, instead of lashing or beating, which was the usual  practice to chastise criminals and sinners; the whip was generally used for throttling the offenders till they died. According to some reports, the nobleman Nawab Zulficjar Khan Bahadur and his father were asphyxiated with a leather belt. Zatalli was also strangled in the same way for  pointing out this innovation in a verse (badshah-e tasma kushfarrukh-sivar or ‘Farrukh-Siyar, the king who kills by  the leatherbela It is possible that the ruler was affronted not so much for being condemned as a tasma-kush’ , but for the poet’s mocking his unjust rule.’

Direct Sources/References (few text put as it is so that context is same):