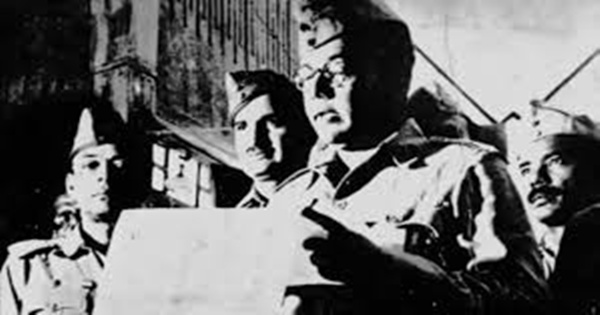 It was the INA trials in the Red Fort which led to uprising by the Indian armed forces under British. These trials in Red Fort ultimately acted as a catalyst in driving the British out of India. This fact is corroborated by The British high command themselves including Clement Attlee and Lord Mountbatten. Tamal Sanyal, a Netaji fan working for the CRPF, has sent proposal to PM Modi, to the Delhi government and the Culture minister demanding setting up of an INA Museum and Memorial in Red Fort.

In between November 1945 and May 1946, the British held 10 court-martial trials of soldiers of the INA at Red Fort. Hence, it is also known as the Red Fort trials. A number of officers of the Azad Hind Fauz were considered guilty. Most of the soldiers who were tried were British prisoners of War who joined Netaji’s INA. The joint court-martial of Colonel Prem Sahgal, Colonel Gurbaksh Singh Dhillon, and Major General Shah Nawaz Khan, who were officers in the British Indian Army and taken as prisoners of war, and who joined the INA, drew sympathy from Indian soldiers posted in the British Army. The British charged them for ‘waging war against the King-Emperor’. There was huge outcry and unrest amid the Indian troops. The outrage led the British reduce the charges against the guilty.

Tamal Sanyal wrote two letters to PM Modi, the first on 16th February, 2017 and the second on 5th June 2018. Here are copies of both the letters in parts:

Recently, a three day ‘National Seminar on the Indian National Army and its contribution to the independence of India’ was organized under the aegis of ICHR (Indian Council of Historical Research, Ministry of HRD) at National museum, Delhi, from 8th to 10th of February, 2017. In this, the general public expressed curiosity and yearned to know more about the INA and its contribution to the Nation.

As per available accounts and records, the Azad Hind Fauj fought till the “Last Man, Last Bullet”, to overthrow the British Army, true to the spirit of any soldier. It was the first ” National Army”  ‘of, for & by the people of the Nation’, raised for the single goal of achieving independence of the Nation.

The soldiers of INA sacrificed everything they had of their own, on the battlefield. Whoever was caught alive, was brought to India by the British govt and many of them were shot in detention. As per account given in the book “Azadi Ka Maseeha” (pg102) of the above quoted author, ‘1580 Prisoners of War (PoW)’ were shot dead by the British, by firing from machine guns, in a single night, at Neelgunj, Barasat, North 24 Paraganas (W.B.) and Jhikorgaachha (now in Bangladesh). Bullet marks can still be seen on trees and walls. The Nation never came to know the Truth of the valiant battle and the ultimate sacrifice made by these unsung soldiers. . Bits and pieces of such historical evidence lie scattered all over South-East Asia, which needs to be collected and collated properly.

A Nation, which doesn’t remember or praise its Heroes, seldom produces heroes, as no patriotism is infused in them and it is our solemn duty as citizens of this country to pay a glowing tribute to these heroes. In view of above, we the following urge you to kindly take the following steps in this direction :-

b) Set up a ‘Netaji Subhas Chandra Bose & INA Study Centre’, under the Social Science Faculty, at Delhi University, in the same lines of  ‘Mahatma Gandhi Study Centre’, as well as ‘Buddha Study Centre’ already functioning at Kashi Vidyapeeth. This will save the expense of setting up the Study Centre at some other place.

c) Construct a  MUSEUM OF AZAD HIND FAUJ (INA) at Delhi and ERECT A WAR MEMORIAL of INA preferably at Red Fort. The museum should have detailed day to day history of the army, accounts of various soldiers, accounts of its struggles, victories and losses,  weaponry etc. It is understood that the task is huge, but it is nothing compared to their contribution to the Nation. So many people are still alive in our great Nation who can contribute in bits & pieces to this mission.

We would like to request you to kindly form a high powered committee, chaired by your goodself, to look into the matter. We sincerely believe that in view of rising public demand and the right of the people to know the correct perspective of history, you would kindly accede to the above request and oblige.

This letter is in continuation to my earlier letter dated 16/2/2017, on the subject, addressed to you  (Copy enclosed).

Ministry of culture does not establish museums on its own. However it operates Museum Grant Scheme under which financial assistance is provided to State Governments, voluntary bodies, Societies and Trusts registered as a society under the Indian Societies Act 1860 (XXI) or a similar legislation of the state governments for setting up new museums and for development of existing museums for which proposes are required to be submitted in the prescribed proforma alongwith requisite documents. The guidelines of the Museum Grant Scheme are available on the website of the Ministry at www.indiaculture.gov.in. If a proposal to set up such a museum is sent to this Ministry in accordance with the guidelines of the scheme, it will also be considered on merits. (Copy enclosed)

The contents of this cannot be treated as a Public Grievance. (Copy enclosed)

It was requested in the letter quoted above to constitute a high-powered committee, preferably under your own chairmanship, to facilitate collection of various facts and artefacts/articles of Azad Hind Fauj, scattered all over South-East Asia & Russia.

I am also enclosing the dateline of the pitched battle of ‘Azad Hind Fauj’ with the British Forces. A simple reading will make it clear that it was one of the toughest battles the British Army had to face, in the Second World War. Azad Hind Fauj, under the leadership of its legendary leader Netaji Subhas Chandra Bose, fought relentlessly from March to June of 1944, on the North-Eastern front of the country. It was its sheer bad luck and sheer good luck of the British Army, that it lost the battle, which could have changed the destiny of the Nation. The general public of the country also knows it very well that neither Netaji Subhas Chandra Bose nor the Azad Hind Fauj got their due credit in the history. It is now our solemn duty to correct the distorted course of history and ensure that both get the respect due to them.

It is quite disheartening to see that such an important issue concerning a legendary leader, who is known as the ‘Liberator of the Nation’, has been dealt in a very shabby and customary manner by the ministries and subjected to pointless red-tapeism. If there is no provision for construction of a museum by the ministry of culture, then a Parliamentary resolution can be bought or the Minister can give a one-time waiver in this case, as it is not an ordinary case, but a very very special case. The one-liner reply of Ministry of HRD is more humiliating. It is clear that neither the minister nor any senior officer, who can judge the gravity of the case, has ever seen the case, to be  considered  seriously. It is the duty of the Nation to give recognition to the sacrifices of Azad Hind Fauj and the ministries are not doing any favour to the general public.  The Nation is thankful to you that you have taken an initiative in releasing the secret files relating to Netaji. So it is expected that in the present issue also, you will take a personal interest and ensure that a museum of Azad Hind Fauj is constructed at Delhi and the Delhi University is renamed accordingly.

As we all know, the dream and the slogan of the Azad Hind Fauj was “Chalo Delhi”, but it could never reach Delhi. Now it is our earnest duty to ensure that at least its memories reach Delhi, so that the present and the coming generations know the sacrifices of the sons of soil. This museum will serve as a fountainhead for inspiring patriotism in the generations to come.

I had personally met Dr. Mahesh Sharma, Hon’ble MoS for Culture, on 23/3/2017 and apprised him of the facts and handed him over a copy, who ensured that he will look into it. I have also apprised Sh Amit Shukla, PS to Dr. Mahendranath Pandey, MoS HRD of the facts and mailed him and the minister a copy, to be shown to the minister. I am unaware of the outcome till now.  In view of above, it is requested that the case for construction of Azad Hind Museum & memorial and renaming of Delhi University may kindly be monitored by your office, so that it becomes a reality. I hope that you will kindly accede to my request and oblige.

Tamal Sanyal has singularly thought about this and translated it into action. He is supported in this endeavor by

Tamal Sanyal, who hails from Varanasi and works for the CRPF, has also sent a proposal to the Delhi govt on the same citing reasons why the INA Museum and Memorial should be constructed in the Red Fort.

It is high time the government recognizes the efforts of Netaji and the INA in India’s freedom struggle.