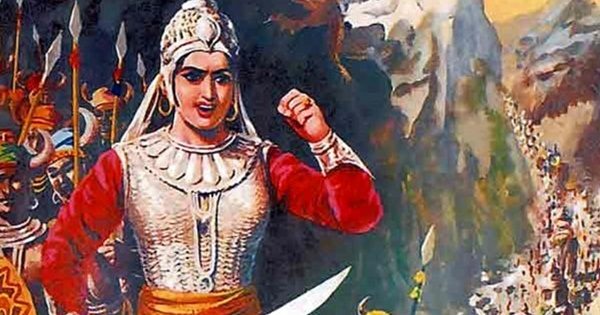 Rani Durgavati and her heroic ultimate sacrifice to save her kingdom from Mughal invasion has immortalised the history of Garh Mandala or Garh Katanga kingdom. Geographically, Garh Mandala kingdom was northern part of Gondwana region.

The Garh Mandala kings trace back their ancestry from Jadu Rai who was a warrior of Rajput origin. Initially, JaduRai served Chedi Kings but later, he entered into service of Gond Raja Nagadev. He also married Ratnavali, only daughter of Raja Nagadev.

When Gond Raja Nagadev died in Vikrama Samvat 415 (358 CE), his son-in-law became the king of Garh Mandala and founded the rule of his dynasty. Total 47 kings reigned over Garh Mandala from Jadu Rai to Arjun Singh for the period from 358 CE to 1480 CE.

After the death of King Arjun Singh, his son Sangram Shah became the king of Garh Mandala. He was a great warrior and extended his kingdom from three or four districts to 52 districts. These 52 districts collectively had 32,330 villages. He built the fortress of Chauragarh. He reigned for 50 years.

Asaf Khan, a Mughal governor invaded Garh Mandala Kingdom in 1563 CE. Rani Durgavati advanced herself on an elephant supported by her troops. She fought valiantly but an arrow struck in her neck. Finally, she snatched a dagger from her elephant driver and killed herself to save her honour.

Total 16 kings reigned over Garh Mandala from Sangram Shah to Samir Shah for the period from 1480 CE to 1781 CE. Finally, Garh Mandala became part of Maratha Kingdom in 1781 CE. The last King Sameer Shah died in 1804 CE. The Chronology of Garh Kings from 1480 CE: