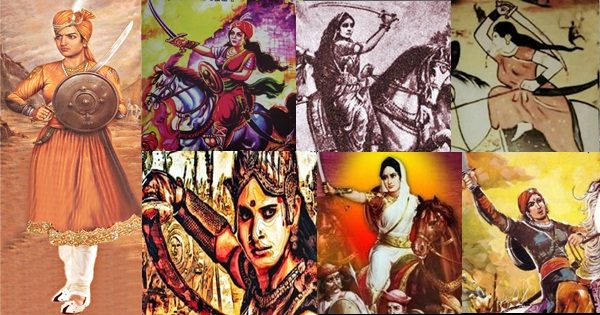 Her mother slowly put the blanket of silence over her. She knew that today was an extremely tiring day for her child. She caressed her fatigued arms and legs, slowly closed the door and left the room.

Today in school Diya had read some stories of valor of the great women who had sacrificed everything for their motherland, but have remained unknown. She had never heard their names and read their inspiring stories. As she was short of time she was able to read only 7 of these short but encouraging biographies. And somehow they had left a strong impact on her mind. All day long she was thinking about their sacrifices and she also could not believe that at that period when women were not given much importance, these women went against the society and rose up. She could not imagine the amount of courage they carried in their hearts. These were some thoughts that came to her, and are still coming, as she sleeps. She is comfortable on her bed, with her blanket pulled till her chin, and she still is thinking of those unbelievable characters. But as she closes her eyes she does not realize that these thoughts have transformed in a dream – a dream that is going to change her life.

In this dream she sees that the seven women, she had just met, have gathered in the Gingee Fort, in the southern part of India, and are having a meeting. And surprisingly she too is invited to attend the meeting. In the fort they have gathered in the dining room, and are sitting around a 7 meter long table. On the table are placed juicy fruits and delicious dishes that are served on golden plates.

Diya is completely bewildered, as she does not know anyone in that massive room (but knows their stories), but she has been given the main seat, right on the front of the table. She looks at the seven women, sitting comfortably in front of her, four on her left and three on her right. They are beautifully dressed with bright jewels and ornaments, and are looking like queens. She tries to guess who is who, and softly tells herself their names –“ hmm… that’s Rampyari Gurjar, and I think that’s Naiki Devi, if I’m not wrong those two are Avantibai and Jhalkari Bai, and that would be Tarabai Bhosale, that’s Shivdevi Tomar and the one who is sitting there at the end would be Karnavati.”

Just then they start discussing. Diya tries to listen to what they are talking about. And this is what she hears.

Naiki Devi – “Finally after so many sleepless nights and after trying so hard, our Mother India is free.

Rampyari Gurjar – “True. Those were the days when our India was the richest nation, and was named as the “Golden Bird”. I wish those greedy humans never came and took over our land and our riches. Then imagine how heavenly this place would have been with the old treasures and the developed technologies!”

Jhalkharibai – “And it is this amount of wealth and knowledge that attracted those cruel people to steal and takeover all the treasures.”

Tarabai Bhosale – “But what about the treasures they have already stolen?”
Karnavati – “I hope someone gets them back….”

Shivdevi Tomar – “….and makes India as glorious as before.”

Hearing this short discussion Diya was amazed by the patriotism of these fearless characters. After a short pause they started discussing again.

Naiki Devi – (remembering her sacrifices) I had just become a mother when Mohammud Ghori came to rule over my land. It was for the first time that he visited India. And I had decided that if I do not show him India’s power in his first attempt he would gain more courage and attack more places, and take over everything. At first he sent me a letter saying, that if I surrendered there would be no war and everything would be done smoothly. He told me that he and his men were waiting at the door and he would like me to come with all the wealth and treasures, and hand those over to him. I pretended to agree and went with my army instead of riches. On the other side he was waiting for the treasures, but he did not know that I brought him war. As his men were not ready they faced many casualties and finally ran away. They never thought that a queen would attack them. And that was the battle of Kayadara. I fought with my son tied to my lap, as he was to become the next king of Gujarat.”

Tarabai Bhosale – “Well as we are talking of the Mughals, let me tell how I faced them. After king Rajaram passed away the Maratha Empire was handed over to me. And at that time already there were some conflicts between the Marathas and the Mughals. Seeing the situations I did not waste time on tears, instead threw myself in organizing a well-planned and vigorous opposition to Aurangazeb’s army. I decided to single-handedly direct the Maratha armed forces. And didn’t let him takeaway anything from my land.’’

Listening to these stories, Diya could not wait to listen to more patriotic stories. As she was looking for more, Rampyari Gurjar started recounting hers.

Rampyari Gurjar- “You all must be knowing Taimur. He wanted to capture Delhi. On his way from Central Asia to Delhi he captured 100000 Hindus. When he reached Delhi he killed all of them and made a pillar with their heads. On his way he also massacred thousands of others and razed temples to the ground after having looted their wealth. Just then I made an army of 40000 female warriors and 80000 men from different communities, divided them into small troops, and sent them to attack Taimur and his forces. I did not let him proceed, we stopped them in Meerut and in Haridwar and forced him to flee India. The following day they were attacked by men and at night, I along with 40000 women warriors laid surprise attacks and looted their ration. The next day as he had failed to attack Meerut he decided to attack Haridwar. But he did not know that more men and women were waiting for his arrival. In Haridwar also Taimur suffered from the same strategy. In the last battle a 22 year old Jat warrior, named Habir Singh Gulia managed to hit his chest with a spear. After this he fled with his forces back to where he had come from, and died after 7 years because of the pain.”

Avantibai -“Well other than these Mughals, the British also forcefully took over our country. When they saw that my husband Vikramaditya Singh fell ill, they took advantage of his illness and started interfering in the affairs of Ramgarh. I passed six years explaining them, but they did not accept what I said. By then the war of independence in 1857 had started in Meerut. I joined this movement, as my objective was to throw these British out of my land. I raised an army of 4000 warriors. Seeing this, the British declared war. The battle was held in Kheri, which is near Ramgarh. The British lost the battle. It was for the first time that Indians won against the British. As the British could not bear their defeat they came back with a bigger army and attacked Ramgarh. They set fire to my city. I escaped to the Dev Harigarh hills. Somehow they found me and told me to surrender. But I would rather sacrifice my life than handing over everything to the British. I did not even let them touch me. With one blow I struck myself with my sword.”

Jhalkari Bai – “Well Rani Laxmi Bai also faced the British in a similar way. She had herself trained me and made me the commander. I looked exactly like her. The British, in this case, wanted to divide Jhansi. And Rani Laxmi Bai would never let them do that. As she did not agree the British threatened her and told her to surrender. As she did not accept with them, they declared war.

In the battle there were casualties from both sides. The British wanted to enter the fort and destroy everything and also capture Rani Laxmibai. I advised her to escape, and disguised myself into Laxmibai. The British caught me and thought that I was the Rani of Jhansi. They asked me how I wanted to be treated, I told them to hang me to death. They did but later realized that I wasn’t the Rani of Jhansi they were looking for.”

Shivdevi Tomar- “As we are talking about the revolts that had already started in Meerut, in 1857, this news had spread like fire, all over India. I was in Baraut, 54 kilometers from Meerut, when I came to know about the movement. I was only 16 and was never trained in warfare. Still I decided to hold a secret meeting with some of my friends. We had decided to attack the British when they reached Baraut. When they arrived my group and I attacked the British, with only one sword each. I wounded many and killed 17 of them. The British never expected that they would get attacked in Baraut. After some time, the remaining British soldiers fled to save their lives. I was wounded, and as I was recovering they attacked Baraut for a second time, with a bigger number of soldiers, and also caught me, and shot me with several bullets. But I was happy to have done, at least something, when my land was in danger.”

As Diya also was 16, she could not swallow what she had heard a few seconds ago. Just then she realised that only one last story of valor was remaining, and that was Rani Karnavati’s. She knew her very well, as she was from her place, Garhwal, Uttarakhand.

Karnavati- “In 1640, when Shah Jahan sent his massive army to attack Garhwal, I alerted my army for a fierce battle. In the battle the Mughal army faced a lot of casualties, as they were not well prepared to fight on hilly terrains. Victory was soon on our side. Many Muslim soldiers fled the battlefield. I knew that we would win, but I did not want to leave them in a situation where they would be encouraged to attack again. So as I was fighting, I cut some of the soldiers’ noses. Many actually fled the battlefield because of humiliation. After the battle was over, I sent a letter to the Mughal Emperor saying that next time I would chop off their heads.”

Then there was a moment of silence in the enormous room. Everyone was moved by each one’s courage. Then suddenly there was a small ring, and that was Diya’s alarm. She woke up and rubbed her eyes. Then she took a moment to think about what she had just dreamt. After a few minutes she opened her window and felt the bright and fresh sun rays on her cheek. As she was looking at the roads and the shops below her window, her eyes fell on a poster, and on the poster there was a quote by Dr. A.P.J Abdul Kalam. It said “Dream is not that which you see while sleeping, but it is something that will never let you sleep.” And that quote slowly transformed into the motto of her life.

This article on Saptaveerangana is by 15-year-old Ritaja, a student (from Puducherry), who narrates her experience after reading about them in Saffron Swords (Click here to visit book link) authored by Manoshi Sinha Rawal and Yogaditya Singh Rawal.