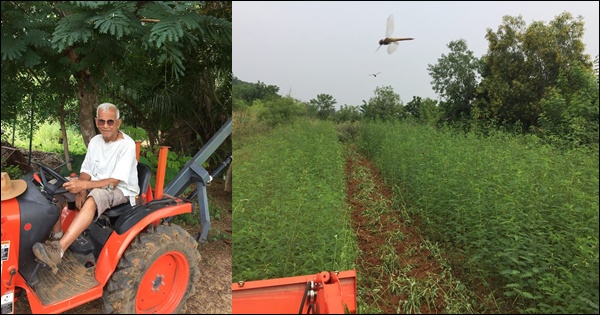 It is but usual to view barren lands stretching into acres across the length and breadth of India. Barren lands are generally a result of ecological destruction caused by not only natural disasters like drought but also man-made destruction like deforestation, pollution, mining, salination, etc. Such sites cannot be habitats for wildlife or humans. Plant communities cannot thrive here. Land restoration is only answer. It is the process of ecological restoration of barren sites to a natural landscape and balanced habitat through setting up of reliable water provisioning in addition to stabilizing and fixating the soil. Once followed at the big level, land restoration can contribute to the creation of a greener India and a greener world!

This 80 year old energetic and visionary gentleman from Chennai is an inspiration for all. He is Sridharan DV. He has set an example in land restoration through his active involvement of restoring acres of ecologically destroyed sites to their natural and green look. He founded pointReturn in 2006 and adopted an abandoned piece of land. His passion for the environment, especially the importance of water as a nation’s only true wealth and the humble folk of India who have a quiet reverence for the traditions of this land, enriched by many significant lives in its past, overwhelms him. He spends most of his time restoring the ecological balance of the abandoned lands. 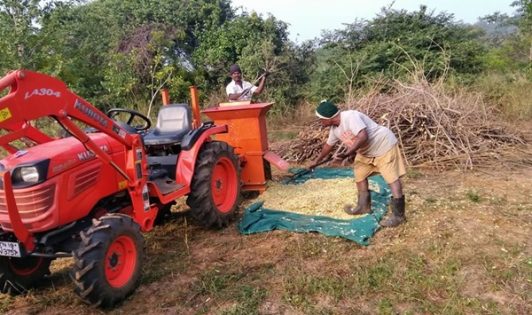 At age 80, he is all the more energized to continue with his land restoration activities. He says, “I was not born into wealth nor have I worked hard for one, but I am surprised at what has accrued to me. It is disproportionate to my education, skills, labour, goodness or acumen. I wonder how this has come about with such ordinary effort.” He continues, “When I began the land restoration work at pointReturn in 2006, I had dreamt big. Big dreams get us started, but it’s hard to tell where they might take us. I dreamt the derelict land would become rich in water and topsoil, that it’d  provide food, water, shelter and energy for 40 people; that it’d be run by volunteers who’d live on it and protect its newly created water bodies and fields; that they would live off the produce and lead frugal lives; that it’d attract and motivate back-to-the-landers”

14 years down the line, Sridharan DV has been able to fulfill what he has planned. The once barren and abandoned 17 acres of land now annually harvests 4 million litres of rain water that’s charged into the ground. Wild weed and short vegetation cover is rampant indicating top soil build up. Bird and small game count is increasing. DV planted 6000 plus trees across 10 plus acres. No use of chemicals or pesticides! Energy is derived from solar power and a wind pump. Due to drought for some time and lack of rain water, 200 of the trees perished. Sridharan DV enjoys no subsidy from the government. He has never availed a donation!

It wasn’t easy for DV to get committed volunteers initially. In his words, “Well, the dream of easily attracting volunteers to come and live in a community didn’t come true. Many came visiting, three stayed for four years and then left. Most quickly they lost their enthusiasm. Those that would stay on land, tend to long for properties of their own. So I had dreamed in error there.”

Single and worried about the future of the land restoration activities that he started, he says, “Since 2014, I have been a worried man as to what might happen to the land and the work after my time. What is this preoccupation of man with creating legacies? I can understand that in a parent with children being anxious for their future – but in a single man? My guess is, that it is to seek validation for a life having been meaningfully lived.” 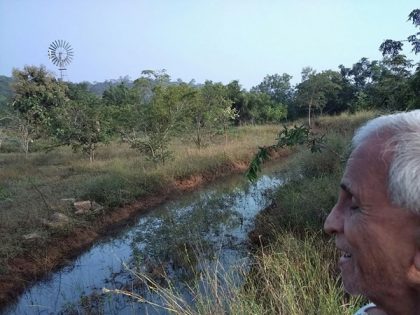 PointReturn site enriched with water; notice the wind pump at a distance

Over the past five years Sridharan DV made a few decisions to safeguard the land from falling into insensitive hands. First, he invited a chain of schools to build one on a 5 acre lot he assigned them. And next, he invited a Trust to grow food on 4 acres, for the free hostel it runs elsewhere in Chennai. These two would be place holders to thwart adventurers. The two moves gave him some time to think about the rest of the land. What might he do with the rest of the land that would ensure their permanence?

And the idea about planting a forest cropped up in his mind! He recalls, “I heard a sudden and compelling voice: plant a forest, it said. Several seductive images followed: It’d have a walking trail threading through a dense woods populated by a diverse stand of trees. It would lead to a perennial forest, self sustaining, self renewing and admit humans only as visitors. They’d watch birds and small game whose home it’d be. Humans would observe them, learn from them, go away refreshed, feel an ownership and be moved to defend it against any miscreants.”

Sesbania crop, a legume with ability to extract Nitrogen from air and fixing it in soil; A field at pointReturn languid after a meal of green manure

The reverie was so vivid, that action followed quickly. Sridharan DV called his old friend Joss Brooks in Auroville. He paid a visit and told him to get a 100 wooden pegs ready to lay and to mark out the proposed walking trail besides design in 2 or 3 open spaces like clearings in a woods.

DV drilled holes, 12” dia and 2 feet deep randomly and 4 feet apart in the rest of the land. Joss Brooks provided 2 year old saplings from his nursery and brought his team over to plant out. The saplings were chosen for colour, fragrance and bird-friendliness. No thorny creepers or invasive species. And no timber trees that’d tempt felling. 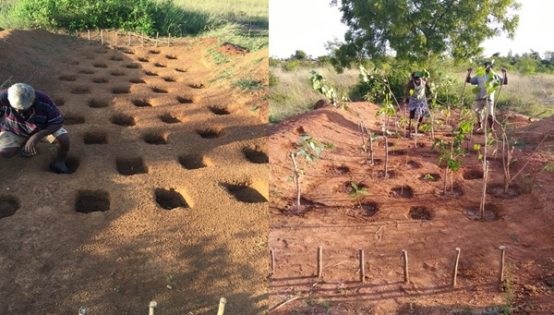 Dense planting of trees at pointReturn following Japan’s Akira Miyawaki’s method – to plant trees so dense that they race each to the top to grab sunlight.

Joss advised him to water and to take care of the saplings for just 3 years. “Then you have a stand of trees that’ll go on renewing itself without much care, save maintaining the trail and lopping a few overhangs. Birds and small game will take over. All you’d then be doing is wandering the trails and experiencing something new every day,” Joss had said. 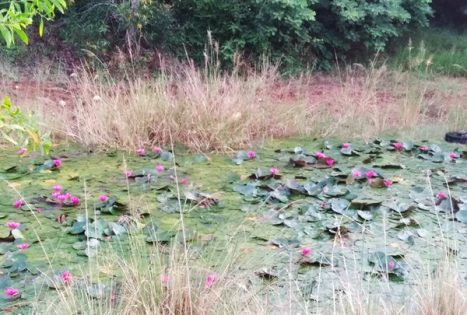 Lotus in full bloom at pointReturn

“Who can pass up such a promise of permanence! I am glad I didn’t.,” says DV.

Sridharan DV was a sea-going engineer. “That’s a career that has made me what I am: a somewhat assertive person. The reason is life at sea infuses you with self-confidence. Because, you see, even if one’s father owned a fleet of ships his son has to start at the lowest rung, gain work experience and pass exams for each climb up the ladder,” he says. 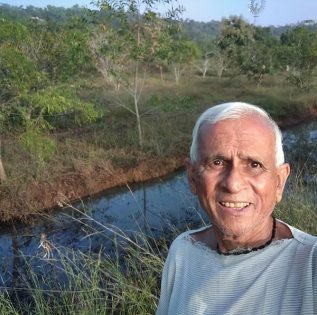 DV says regarding cutting down pollution levels, “Terraces and spaces in homes in cities can be turned into vegetable gardens. Even a miyawaki forest can be created in 2000 sqft of land in two years. If one million people create a miyawaki forest each, imagine how many acres of forest area we can create! You may not own a land for this but you can adopt a 2000 sqft land and facilitate the creation of a forest.”

He continues, “Let us start with this data: India has 250 mill. households, each with about 5 members. Let us assume 20% of the households is likely to have the interest and means to create Micro Forests. That is 50 million families.” Here is a link to the complete story (clickable link) by DV: Small Forests that Citizens can Grow: Part 1.

DV provides a list of suggestions for finding land for creating a forest. Here is an excerpt from his article on this titled Small Forests that Citizens can Grow: Part 2 (clickable link) –
1. Your yard, if it’s large
2. Your weekend or crop growing farm
3. In your ancestral village with a caretaker to grow it
3. Your company land, by persuading your management
4. In return for a donation you make to an institution
5. In the campus of your spiritual Guru
6. Around small temples in return for an endowment
7. Persuading village governments
8. Urging your MP to buy land and commit it to a forest using his MPLADS funds.

The enthusiastic, dedicated, and committed environmentalist winds up, “I spend most of my time actively restoring the abandoned piece of land I adopted in 2006 and, passionately willing India to become a happy, prosperous, peaceful land.”

Till date, Shridharan DV has planted over 6000 trees. And the tree plantation drive continues….

Indira’s 1975 Emergency: How RSS Fought for Restoration of Democracy