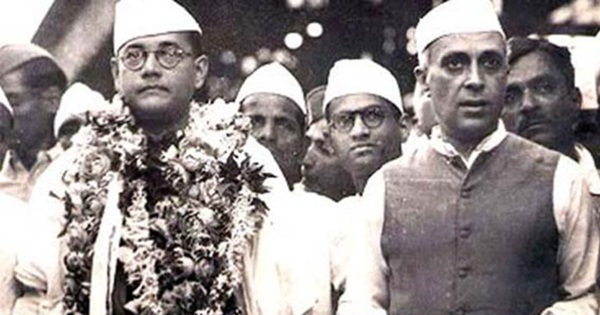 In 1950, Azad Hind Fauz treasury comprising of gold, jewellery and other valuables were valued at 1,47,163 Straits dollars as per Singapore government. Just imagine the value of the assets going by present valuations. Do you know, as per declassified files released on 31 August 2016, Nehru agreed to share INA and Indian Independence League (IIL) funds with Pakistan in the ratio 2:1 in 1953? As per a India Today report, ‘This was revealed in a note which was enclosed with a letter dated October 18, 1953 by former Prime Minister Jawaharlal Nehru to then West Bengal Chief Minister B C Roy.’ As per the same report by India Today, the note further read, “There were protracted negotiations with Pakistan as she claimed a part of these assets. In the end, it was agreed that the assets should be divided between India and Pakistan in the ratio of 2:1.”

One of the 37 secret ‘Netaji files’ contains details about ‘INA Treasure’. PM Modi put the first lot of 100 files related to Netaji in public domain on January 23, 2016. This was released on the occasion of Netaji Bose’s 119th birth anniversary. The second lot of 50 files was released in March the same year followed by release of 25 files each in subsequent months. More files are waiting to be released, which will throw more light into more details about Netaji and the Azad Hind Fauz. It is through the declassified papers in the National Archives that revealed how Nehru government initiated snooping on the Bose family for over 20 years from 1947 to 1968. Why would Nehru initiate snooping and that too for such a long period? It is for the readers to think and digest!

According to a dailymail.co.uk report, a select few Indians ‘looted the treasury of the collapsed Provisional Government of Azad Hind (PGAH)’ worth several hundred crore rupees. And the suspected loot took place after the ‘fake Netaji Bose death theory by plane crash’ in 1945. The report reads thus, “But the startling twist is not about the missing Indian National Army (INA) treasure worth several hundred crores of rupees today. It is that the government of the day knew about it, but did nothing.” Nehru was aware of the Azad Hind Fauz treasury. Was Nehru also involved in looting the INA funds? His knowledge about the theft and not doing anything says it all!

As per dailymail.co.uk, ‘The INA treasure, or what was left of it, was secretly brought into India from Japan. It was inspected by Nehru who called it a “poor show”. There was a brief debate within his cabinet on what to do with it. Maulana Abul Kalam Azad, the education minister, suggested the gold be given to Netaji’s family. Nehru overruled the suggestion. The jewellery was sealed and consigned to the vaults of the National Museum in Delhi.’

Zee News published a report in February 2016 under the headline – ‘Jawaharlal Nehru awarded the man who stole Subhas Chandra Bose’s INA treasure’. As per this report, ‘The documents have confirmed that Bose’s Indian National Army treasure was looted and former prime minister Jawaharlal Nehru was aware of the development. As per the conversations held between Japan and India in the past, the Nehru government knew about the treasure theft but chose to keep a blind eye.’ The report also puts suspicion on Munga Ramamurti, SA Ayer – two ex-aides of Netaji and Col Figges, the Military Attaché of the British mission in Tokyo. Though Nehru was aware of this, why didn’t he take action against them?

Anuj Dhar’s book India’s Biggest Cover-Up describes in detail on many facets pertaining to the INA treasure and the association of Munga Ramamurti, SA Ayer, and Prime Minister Nehru on this. To quote from the book, “SA Ayer, Ramamurti have been exposed in the official files as the plunderers of the INA treasure and personal property of Subhas Bose.” Ayer also created the fake Netaji air crash theory which Nehru read out in the Parliament. The book points out how ‘Ayer received a warm welcome by the Prime Minister when he met him in New Delhi on his return.’ Ayer was also given a promotion. Nehru appointed him as an adviser for the publicity of his flagship Five Years Plan in 1953. The book also points out how Ramamurti prospered in Japan. At a family marriage function J Murti’s Japanese bride ‘wore Indian jewellery some people alleged had come from the INA treasure’.

To quote further from Anuj Dhar’s book India’s Biggest Cover-Up, “Ramamurti’s pal Figges figures in official Indian records as one of  the members of “the gang” which looted the INA treasure. Jaya Murti himself admitted before the Shah Nawaz Committee that Figges wanted them to take up British nationality.”

Dr. Subramanium Swamy in his speech at the book release function (Books – Kalki Tu Kaha Hai and Bose or Gandhi: Who Got India Her Freedom) of Maj Gen. GD Bakshi held at Indira Gandhi National Centre for the Arts (IGNCA) on 15th October revealed few secrets on Nehru and the INA treasure. According to Dr. Swamy, Nehru received two trunks full of jewellery of Azad Hind Fauz from Tokyo in 1951. These were brought on his orders. The trunks were full of rubies, diamonds, pearls, and jewelleries – all donated by people to INA for the cause of India’s freedom. Later, when officials opened the trunks, they found them filled with mud, sand, and gravel. What did Nehru do with the precious stones and jewellery?

Anuj Dhar has done tremendous research, proving Netaji Bose was Bhagwanji. In India’s Biggest Cover-Up, Dhar writes ‘Bhagwanji levelled charges against Ramamurti, SA Ayer and Nehru.’  To further quote from the book, “One of the researchers, Subharnshu Roy claimed before the Mukherjee Commission that his correspondence with former CSDIC officer Hugh Toye ‘proved the INA treasure were handed over to Nehru in November 1945’. A similar charge was made by INA’s Lakshmi Seghal in Amritsar in 2002.”. Dhar also writes “Researchers are increasingly convinced that the whole Bose mystery would be solved once and for all if the INA funds, believed to be running into crores, are traced.”

In his book The Springing Tiger: The Indian National Army and Netaji Subhas Chandra Bose, a biography on Netaji Bose, Hugh Toye wrote how Indian residents of Rangoon celebrated Netaji’s 48th birthday on January 29, 1945. As per his account, they weighted Netaji against gold, much against the INA leader’s dislike of the idea. Just image how much gold was accumulated in INA treasury to facilitate India’s independence! Thousands of Indians donated gold and jewellery for the cause.

Not many of us have heard about Saraswathi Rajamani, the covert spy of Azad Hind Fauz at age 15. She was later promoted to the rank of Lieutenant in the Rani of Jhansi regiment of the INA. Rajamani donated all her gold and diamond jewellery to the INA before she joined. Do you know her father was the owner of a gold mine in Trichy? He was actively involved in activities against the British. To evade arrest by British forces, he settled down in Rangoon and continued supporting freedom fighters. He was counted as one of the richest Indians settled there. He donated almost all his wealth to the INA so that India was free from British clutches. The family lived in utter poverty after Independence.

Likewise, the son of an INA veteran recollected, “My father joined Netaji Bose’s INA from Singapore. He donated a huge amount for forming of INA. Due to this, after freedom, our family was under severe poverty, and my father could not send me to school. I was brought up illiterate. I have seen some of my father’s friends who were INA soldiers. They all perished in poverty and their families have vanished.”

These are only very few examples of donations made by Indians. While part of the donations was utilized in fooding, lodging, and military equipments of the Azad Hind Fauz soldiers, part of the assets, amounting to crores were still unused. And now these assets are missing! Vietnam and Japan reported to Nehru about the Azad Hind Fauz treasury several times. What did Nehru do? How did he respond? If he had brought the treasury to India, what did he do with it? Did he loot it along with others? If it is there where did it disappear? These questions will continue to haunt us until the INA missing treasure mystery is solved!