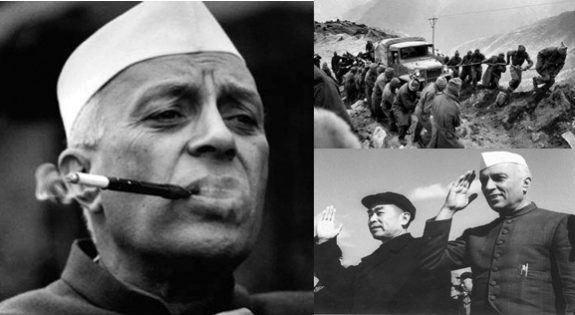 We have grown up, reading about all the good things about Jawaharlal Nehru. Every 14th November, we offered our tributes to him, year after year! Why Nehru’s birthday is celebrated as Children’s Day across India? Was it because little innocent children referred him as Chacha Nehru? What historians falsely portrayed him as ‘spending his entire life for the welfare of children across India’ has well served its purpose.

Jawaharlal Nehru became the 1st Prime Minister of independent India. Thanks to whole-hearted support and endorsement by Mahatma Gandhi! Sardar Vallabhbhai Patel became the Deputy Prime Minister. The British never wanted India to be united. ‘Divide and rule’ was their policy; they advised Nehru that states and kingdoms not willing to accede to the Indian union should not be forced to do so.

Sardar Patel did not pay heed to what the British said. Neither did he listen to Nehru’s orders or sought his opinion in many a matter. While Nehru was more concerned about foreign visits, taking advice of the UN and British officers, and connecting only with the urban elite, Patel spent more time in villages and amid the masses. Using his exemplary skills, he forced all the 550 small princes and zamindars to surrender and accede to Independent India. He even went to the extent of using military force. The united India we witness today from the east to west and north to south are all because of the efforts by Patel.

Here are 5 biggest blunders that Nehru made during his prime ministership. We, the citizens, are still bearing the brunt of his mistakes.

Jawaharlal Nehru kept Sardar Patel away from the Kashmir issue. He made N Gopalaswamy Iyengar a minister without portfolio, to handle Kashmir. Patel did not know about this. Iyengar reported to Nehru directly. Because Nehru wanted all of his ministers to report to him, listen to him, and say ‘yes’ to whatever he said.

Jinnah from Pakistan constantly interfered on the Kashmir issue. Mountbatten advised Nehru to refer the Kashmir problem to the UN. Sardar Patel opposed the move of taking Kashmir to UN as it was purely an internal matter and no foreign body like the UN should interfere. Sardar Patel met Maharaja Hari Singh and even obtained his signature that the matter may not be referred to UN. The maharaja’s only concern was Sheikh Abdullah, who wanted the king to quit the valley. Abdullah’s protest with a group of Kashmiri Muslims led to his arrest and confinement in jail. Nehru wanted Sheikh Abdullah to be freed and to be installed as prime minister of Jammu and Kashmir. Ultimately, Nehru referred the Kashmir issue to the UN, following Mountbatten’s advice and ignoring Sardar Patel’s repeat counsel and requests.

And since then the Kashmir issue has not yet been resolved. A number of problems cropped up including mass killing and exodus of Kashmiri Pandits, terrorism, unrest, and the list goes on.

2. India Not Securing Permanent Membership in the UN

The United Nations Security Council was established in the year 1945. It began with four members: USA, Russia, France and Great Britain. These countries were the allied forces that had won World War II. In 1955 when the Cold War was at its peak, America offered Nehru the possibility of India getting a seat in the UN Security Council. India had a rightful place in the council, as she provided more than two million men in the War Front.

Shashi Tharoor in his book Nehru-The Invention of India released in 2004 has described about this. In an interview taken by The Hindu on January 10, 2004, he wrote, “Jawaharlal Nehru declined a United States offer to India to take the Permanent Seat on the United Nations Security Council around 1953 and suggested that it be given to China.”

Related Post: Is Nehru to Blame for India Not Securing Permanent Membership in United Nations?

During the early 1950s, China made claims of certain Indian territories. Map of China published in Beijing in 1954 showed the Northeastern edge of Jammu and Kashmir called Akshai Chin as Chinese territory. Nehru was aware of this, but he chose to remain quiet instead of resolving the issue. No diplomatic talks followed. Though there were heated debates amongst his ministers for resolving the border issue, Nehru remained calm giving reason that ‘not a single blade of grass grows there’. Is this reason justified? How can a Prime Minister keep quiet when part of the nation’s border territory is featured as another country’s land?

Nehru ordered creation of military posts in the disputed territories. Arms and ammunition, equipment and food could not be supplied properly in these zones. It was as if going for war without adequate military preparations besides taking for granted that the enemy would not strike. China attacked northeastern territories, especially Arunachal Pradesh. Until then Jawaharlal Nehru and his defence minister V.K. Krishna Menon were under the false notion that China would not take any action. Instead of giving firm orders on time or sending arms and ammunition and other requirements, Nehru made a hasty decision of creating the IV Corps, headquartered at Tezpur, on 4 October 1962. This was done without adequate appreciation of facts on the ground and without adequate logistical support. That was a military disaster.

Though a ceasefire was agreed upon between the two countries, the India-China border issues still persist. Had the issue been nipped at the bud by Nehru, this border issue problem would have been solved.

During Nehru’s regime, Potti Sreeramulu, a revolutionary, went on a hunger strike demanding formation of an Indian state for the Telugu-speaking population of Madras Presidency. Sardar Patel and Rajendra Prasad warned Nehru not to give in to Sreeramulu’s demands on the basis of language. They said that division in terms of linguistics would only create confusion and hatred with/for other linguistic groups. Besides, they advised him to opt for alternative solutions.

Sreeramulu lost his life during the hunger strike. Jawaharlal Nehru declared the formation of Andhra Pradesh three days later. This led to hatred between other linguistic groups and demands for separate states started showing up. The problem still persists. Regional identity cannot be bigger than national identity! Nehru failed to realize this.

Nehru propagated and implemented socialism and went against the capital systems, which led to an economic crisis in the 1960s. Exports were diminished and the public sector was strengthened. This led to rising inflation, shrinking exports, constrained agricultural growth with an annual average growth rate of 4%, which was lower compared to least developed countries across the world.

Jawaharlal Nehru set up the Planning Commission and drew Five Year Plans following the footsteps of the Soviet Union. Economic freedom of the masses and freedom of the press were curtailed. Nehru’s followers did not oppose as they preferred to remain in his good books; they knew Nehru disliked opposition. He got the Indian Constitution amended incorporating allowing of nationalisation of any industry. This led to creation of laws, which further led to imposing limits on what the citizens enjoyed economically.

There were limits to the amount of land one could own. The government was invested with the power to acquire any private, industrial, and agricultural land it deemed fit. Ultimately, this led to the destruction of India’s agricultural sector. No wonder majority of farmers’ suicides over the past several years are rooted to Nehru’s economic policy! His Avadi Resolution, that was passed, was communist in tone and action. The government exercised exclusive control over many other industry segments. The Indian economy only plummeted further.

Nehru’s many blunders, which harmed the nation, were never highlighted before. Thanks to his dynasty in power in Indian politics, right from Independence to a considerable period of time! But times are changing. His blunders are gradually getting exposed. It is time we wake up from our slumber fully of Nehruvian ideology and influence! Jai Hind!

Nehru’s Himalayan Blunders: The Accession of Jammu and Kashmir