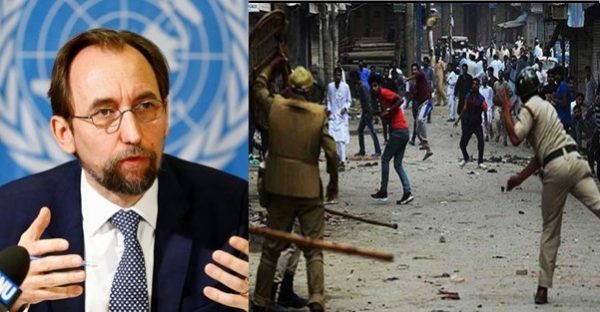 For the first time, the United Nations released a report on alleged human rights violations in both Jammu and Kashmir and Pakistan-occupied Kashmir. The UN Human Rights demanded an international inquiry into the claims. The international body accused security forces of gross human rights violations on both sides of the border at the same time accusing India of using excessive force on civilians. It suggested respect of Kashmiris’ right to self-determination, as international law allows it.

As per a Firstpost report, UN High Commissioner for Human Rights Zeid Ra’ad Al-Hussein said, “It is also why I will be urging the UN Human Rights Council to consider establishing a commission of inquiry to conduct a comprehensive independent international investigation into allegations of human rights violations in Kashmir.”

In this regard, Army General Bipin Rawat said, “I don’t think we should get too concerned with these reports. Some of these reports [by human rights organisation] are motivated. 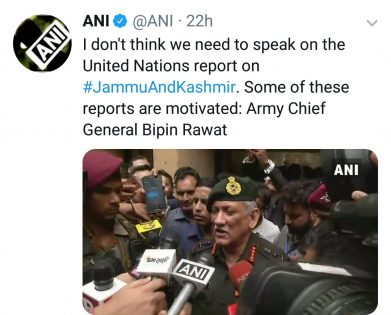 Ministry of External Affairs, India said, “India rejects the report. It is fallacious, tendentious and motivated. We question the intent in bringing out such a report. It is a selective compilation of largely unverified information. It is overtly prejudiced and seeks to build a false narrative.” 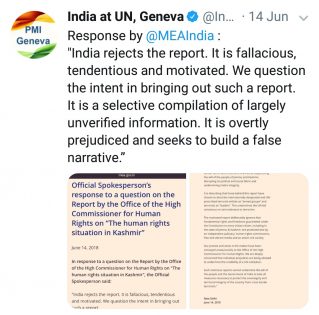 In this context, Maj Gen GD Bakshi said, “The UN Human rights report has been authored by Mr Raad Hussein of Jordon. Ever since he took charge he seems to have been trying to blatantly support Pak and bad mouth India. Raad has been photographed with Hurriyat leaders and is unfortunately letting his denominational leanings colour his outlook the current report is primarily compiled from media reports – many unsubstantiated- and the product of some sold out sections of our media. He insists on calling POK _ Azad kashmir- a patent reflection of his bias.The UN security Council has designated Ket KJeM and HM etc as terrorist organisations. He supersedes the UNSC and calls them Armed groups thereby giving them legitimacy. The whole report is motivated, slanted and most unobjective. It is part of Psychological pressure to demonise the Indian Army and hamper its ops. No wonder the army chief had to speak out against it.” 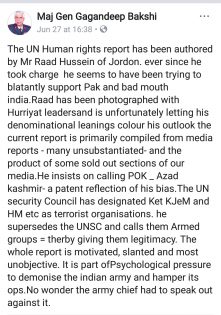 The UN had taken a stand on the Kashmir conflict several times.