What Is the Caste System? Why Was It Beneficial or Destructive to Hindu Society 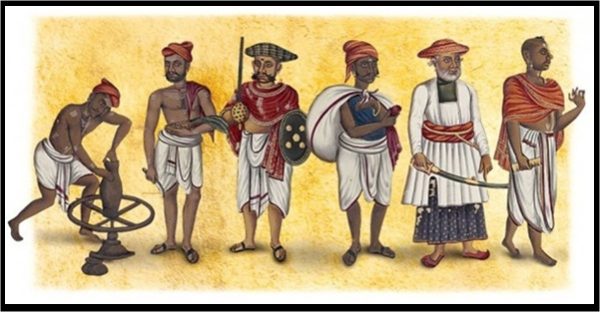 It is nothing different from what is happening in today’s “enlightened” society.

I get asked at least five times a day by someone why I didn’t follow in the footsteps of my very successful father, but chose a different profession. And in response when I point out that my sister has done that instead of me, the approving smiles are back.

For centuries people took on their father’s trade because it was simply the easiest thing to do! You didn’t have to pay extra for education, tools of the trade were readily available, you had a mentor by your side at all times, and you really had limited opportunities elsewhere.

Just look at the number of sportsmen, lawyers, doctors, businessmen, and indeed many other professions whose practitioners are at least the second generation in their family. It is easy to take up the father’s profession because you inherit his genes, his knowledge and experience, his tools and his support systems. You can add more to the pot and then pass it on for your son to take after you. That is how the survival of knowledge through “passing it down” was maintained!

Contrary to propaganda, “caste” or jaati in India wasn’t some sort of prison for life that you couldn’t get out of. The word caste is of Portuguese origin, casta meaning class. Jaati in Sanskrit literally translates to “birth” – it refers to where or in what circumstances you were born into. All it is, is a reference to the family profession, denoting the trade they were into.

Society needed, and over time had practitioners of all kinds of professions – farmers, cowherds, milkmen, grocers, carpenters, jewellers, charioteers, warriors and what not. Over time they acquired specific surnames of the profession, and that made for easy identification of people in the days before you had to beg your HR for employment verification bonafides! That’s all the jaati denoted – your employment.

Until the Europeans imposed their worldview of a social hierarchy on Indians, there was no such thing as a high or low profession – only a skilled or less skilled practitioner of their trade. (Before people call me a Sanghi, a similar practice existed in Native American societies much of which was matriarchal, and the European colonisers “civilised” them by telling them women ought to be subservient to their husbands!)

Was it beneficial? Hell yes! Simply because there was a symbiotic relationship between all professions. Take the yagna or sacrifice, often done in a village which was beset by drought or other natural difficulty – the priest officiated, and dictated what the constituents of the yagna were to be – burning specific substances increases precipitation, and the pamdit worked that out, the carpenter supplied the firewood, the womenfolk helped with the floral decorations and the cooking, the farmer and the grocer helped ensure food was available for the feast, the labourers took care of the pandal erection, the warrior clan took care of security… and so on and so forth. Since every profession had a stake in its success, its importance could never be underestimated.

And when you have clearly defined roles, what else do you expect but harmony? There would be order, and far less poverty. (Helps that the so-called highest caste of Brahmins had begging as a mandate and could fill themselves only by alms!)

The westerners had something similar too. Surnames like Baker, Clarke, Smith and Taylor are all representative of traditional professions that stayed on as names. It’s an undeniable fact of life that people are cut out for certain trades, and that gets accentuated over time by concentrating and enhancing the gene pool – why else do family owned businesses proudly display their 200–300 year legacy on their name boards? It is an indication that what is handed down is definitely of a higher quality than what is just taught!

By the way, when an IAS officer is attacked, or caught for wrongdoing, who is usually the first to react? The IAS officers’ Association.

When a Satyam or a PNB audit fraud is unearthed who reacts first? The ICAI, upset as they are, that CAs have failed to meet standards and lays down new standards.

In a way a jaati was nothing more than your industry body. If a Brahmin had a philosophical/religious/astrological point of confusion that he had to rule on, who could he ask, but a fellow Brahmin? If a carpenter couldn’t get the right kind of wood for a particular climate or location, who else would know what to use, or have it but another carpenter? And how else would they know each other but a jaati sammelan, which was nothing different from a national HR or CA convention?:) Delineation of jaatis was nothing more than a nice professional networking device, something we still follow today!

Knowledge of the profession being very important, preservation and enhancement of the gene pool became even more so – that is why marrying within the profession is something that’s okay and welcomed even to this day. Just look at the number of lawyer/sportsperson/actor/doctor/CA couples, matrimonial adverts that ask for people of the same profession, the sense of comfort you derive from it, and you have your answer for why marriages were largely intra-caste too!

Long story short, “caste” sounds mediaeval to us because we have been brainwashed so. Let’s use the closer-to-correct term jaati, which is what it was – networks of hereditary professionals, which is really what we have today!

This article was first published in Quora.