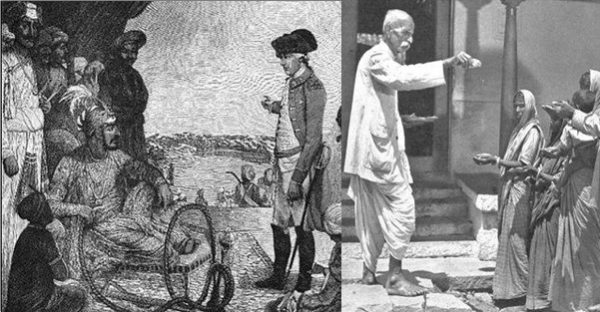 Divide and rule! This was the mantra adopted by the British to break India. To break the very backbone of her existence so that Indians remain backward and never get united to fight for a common cause. It was a series of freedom movements across the length and breadth of the country that gave the British sleepless nights. And the War of Independence of 1857 further dampened their spirits.

It was then that the British decided that creating wide cleavages in the society by dividing the people on the basis of caste and religion can go a long way in breaking the very base of the country. They felt following this ‘divide and rule’ tactic they could weaken any mobilisation of the Indians against their rule. And they succeeded in it!  They implemented it and found it to be favourable for the growth of the British Empire and its smooth functioning.

Indica is the book written by Megasthenes, the Greek ambassador to India around 300 BC. Megasthenes spoke volume, hailing praises on the cultural, social and administrative system which prevailed in India during that time, as seen by him. According to this book, there was no caste system in India, but categorization of profession/work into seven types. This categorization of work was depicted as ‘caste’ in Indica. The book dispels caste theories that is plaguing India at present. Even the Vedas find no mention of caste, but ‘Varnas’, categorizing people on the basis of work. When ancient scriptures and historical records prove the absence of caste system in ancient and medieval India, which was further corroborated by foreign historians, why is India burdened to her core by a social disease introduced by the British?

Maj Gen GD Bakshi wrote about the divide and rule policy of the British – “Caste was the primary weapon and fault line the British used to divide and rule India for over 200 years. They did it with a vengeance after 1857 uprising. In 1872, Sir John Risely held the first caste based census in India. He said – AS LONG AS THERE IS CASTE -THERE WILL BE NO INDIA. After independence our politicians surpassed the Brits in using caste for Political mobilisation. Caste would have withered and died away due to industrialization and urbanization – our politicians kept it alive. They deepened the caste faultlines by putting tags of reservation on caste identities to deepen them at the cost of the idea of India.” 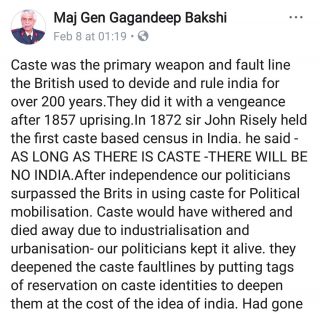 Michael Haan, Associate Professor of Sociology and Canada Research Chair in Population and Social Policy at the University of New Brunswick, wrote in Caste Confusion and Census Enumeration in Colonial India, 1871-1921, “The colonial censuses of India were colossal attempts to enumerate castes according to a hybrid taxonomy that mixed local knowledges with European preconceptions and misconceptions. From 1871 onward, colonial administrators were determined to categorize and count the castes of India, yet experienced many difficulties in classifying, enumerating, and compiling caste data. The administrative practice of census making and taking in colonial India during the 1890s incorporated anthropometric and ethnological tools from scientific anthropology. The introduction of these measures in the census schedule and in enumeration furnished caste with a biological and racial connotation.”

“H.H Risley, president of the Asiatic Society of Bengal and Director of Ethnography for India from 1901 to 1909, had an understanding of caste based on anthropometric measures. Under his supervision, caste was implemented in the census in ethnological and anthropometric terms that naturalized and racialized the category.… Risley revised how caste was envisaged in the censuses.”

Kevin Hobson, a Canadian historian of the British Empire, wrote in his book The Indian Caste System and The British – Ethnographic Mapping and the Construction of the British Census in India: ‘The caste system had been a fascination of the British since their arrival in India. Coming from a society that was divided by class, the British attempted to equate the caste system to the class system….the British belief that caste was the key to understanding the people of India. Caste was seen as the essence of Indian society, the system through which it was possible to classify all of the various groups of indigenous people according to their ability, as reflected by caste, to be of service to the British. Caste was seen as an indicator of occupation, social standing, and intellectual ability. It was, therefore necessary to include it in the census if the census was to serve the purpose of giving the government the information it needed in order to make optimum use of the people under its administration. Moreover, it becomes obvious that British conceptions of racial purity were interwoven with these judgements of people based on caste when reactions to censuses are examined.’

According to this book by Kevin Hobson, a planned comprehensive census was attempted until 1872, which was done under the direction of Henry Beverely, Inspector General of Registration in Bengal. The book also points out how Beverly concluded that a group of Muslims were in fact converted low caste Hindus. The author further points out how H. H. Risley, Commissioner of the 1901 census, wrote about caste in an 1886 publication: ‘a figment of the intolerant pride of the Brahman, rests upon a foundation of fact which scientific methods confirm, that it has shaped the intricate grouping of the caste system, and has preserved the Aryan type in comparative purity throughout Northern India.’

Kevin Hobson wrote about how ‘caste’ was imposed on the Indians, ‘The word caste is not a word that is indigenous to India. It originates in the Portuguese word casta which means race, breed, race or lineage. However, during the 19th century, the term caste increasingly took on the connotations of the word race. Thus, from the very beginning of western contact with the subcontinent European constructions have been imposed on Indian systems and institutions…..the census became not simply an accounting of what existed but an active participant in the creation and modification of the society.’

According to Kevin Hobson’s account of Risley, the latter wrote, “the caste system itself, with its singularly perfect communal organization, is a machinery admirably fitted for the diffusion of new ideas; that castes may in course of time group themselves into classes representing the different strata of society; and that India may thus attain, by the agency of these indigenous corporations, the results that have been arrived at elsewhere through the fusion of individual types.”. Hobson ascertains, ‘In making this statement Risley exposes the British agenda of creating a society that conformed to British ideals through the use of a British interpreted caste system.’

After the major war of independence in 1857 that spread across the length and breadth of India, shaking the British Empire, caste and religion were the weapons chosen to divide and break India. They used Indians against Indians on the basis of caste, kingdom hood, and religion to firmly establish their supremacy.

This ‘divide and rule’ policy of the British on the basis of caste and religion triggered the existence of various caste conflicts in the Indian society. The British left India. But their policy, now ingrained deep in the Indian society, continue to further break India. The seeds they have sown have yielded into big trees and bearing the fruits! The fruits breaking the country’s very backbone! It is time the sons and daughters of the soil rub their eyes to draw example from our rich past where no caste system existed. It is time India awakes from her deep slumber before it is already too late. Jai Hind!

1. The Indian Caste System and The British – Ethnographic Mapping and the Construction of the British Census in India, Kevin Hobson